One of the qualms many nervous Clinton voters like me have is the fact that Clinton (and her husband) have a habit of surrounding themselves with incompetent or ethically challenged individuals. On the other hand, Clinton also gets some advice from Neera Tanden. Tanden is the president of a liberal think tank that tries to influence Democratic policies, a former member of Hillary Clinton’s 2008 campaign, and an unofficial adviser to its current one. In those capacities, she adopts the earnest voice of a Washington official who understands any of her unintentionally interesting statements could trigger a scandal that attaches to Clinton. If you ever have a chance to listen to her speak candidly — which (bias confession!) I have on occasion, since my wife once worked for her organization and Tanden lives in my neighborhood and sends her kids to the same schools — you come away impressed and even awed by her ability to summarize any topic with pithy brutality.

Thanks to WikiLeaks, which stole emails from the Clinton campaign and some of its officials, Americans who don’t benefit from accidental geographic proximity to Tanden can benefit from her candid analysis of various people in and around the Democratic Party, including Hillary Clinton. Here are her best burns:

1. Hillary Clinton was fucking insane to use a private email system. 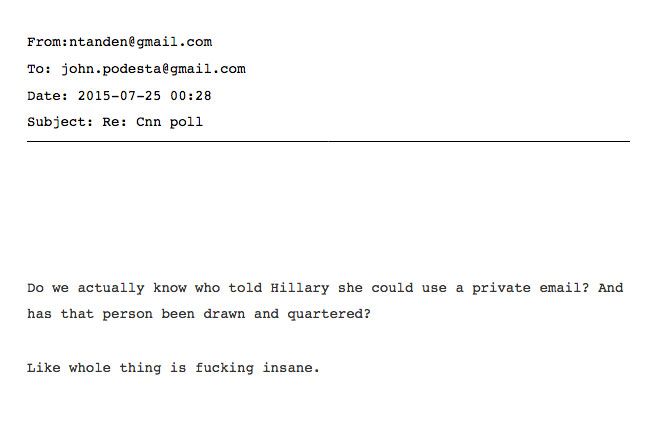 2. Her advisers didn’t release the emails sooner because they “wanted to get away with it.” 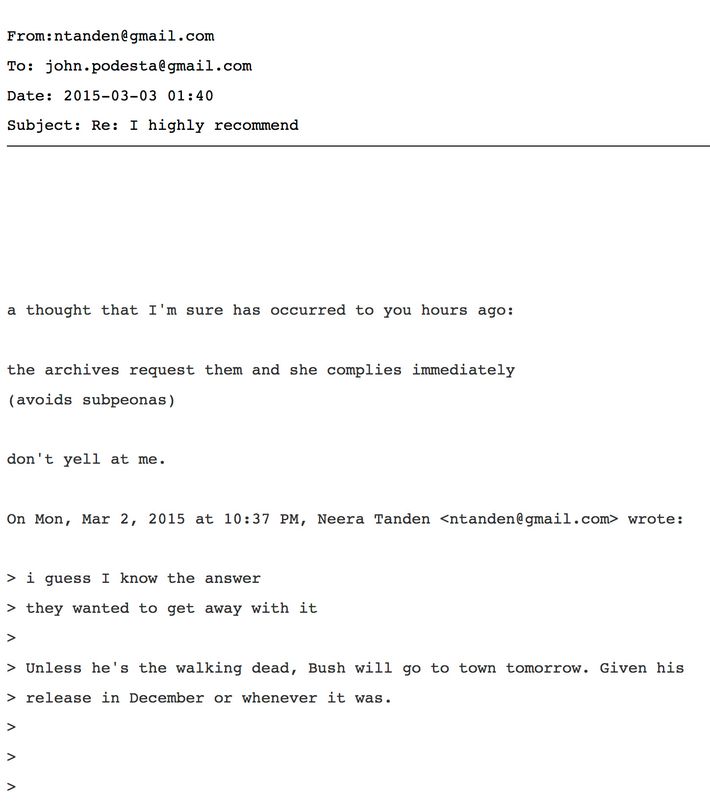 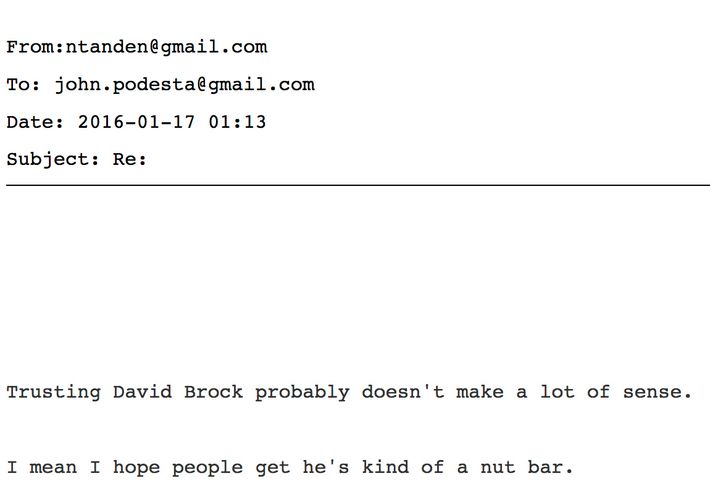 4. Donald Trump is an unhinged narcissist, and David Brock, back for more abuse, is also a conspiracy theorist. 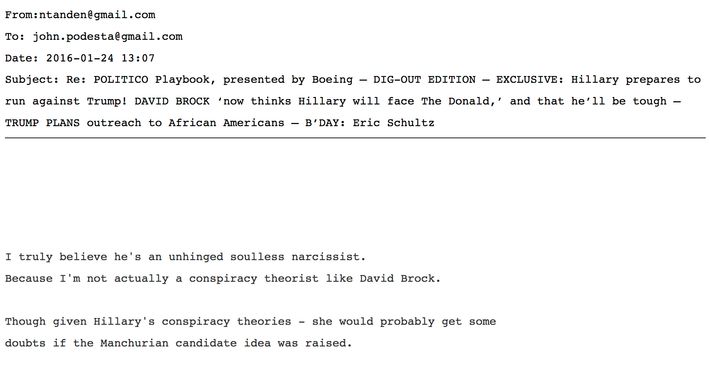 The context of this exchange is Tanden joking that Trump is a “Manchurian candidate” out to secretly undermine the Republican Party from within, but then clarifying that she does not actually mean it because, unlike Brock, she is not crazy. Tanden also implies that Hillary Clinton is herself susceptible to conspiracy theories, which explains her apparent fondness for the nut bar. 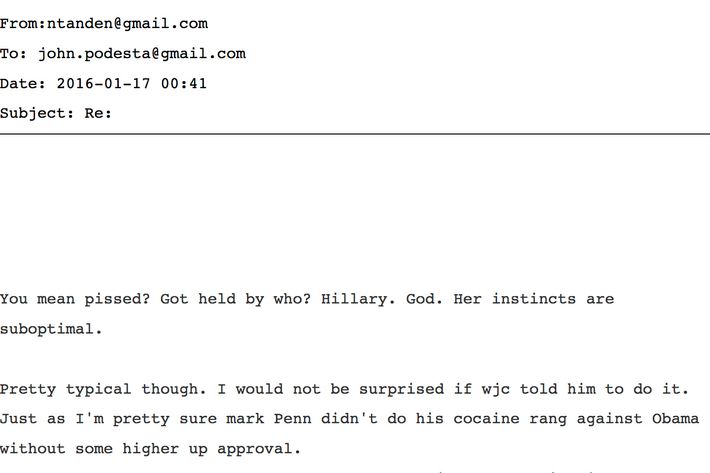 The context is a discussion about whether the campaign should have responded quickly to a controversy, but here Tanden attributes Clinton’s caution to a larger failure of political instincts that causes her to respond badly, and often belatedly, to critical stories. Although, she also considers the possibility that Bill Clinton was behind it and cites as an example her suspicion that Bill apparently approved a sleazy attack on Barack Obama in the 2008 campaign. (Mark Penn, Clinton’s incompetent campaign manager in that election, repeated the word cocaine on television in a clumsily obvious effort to inject the accusation into the campaign without owning it directly.) 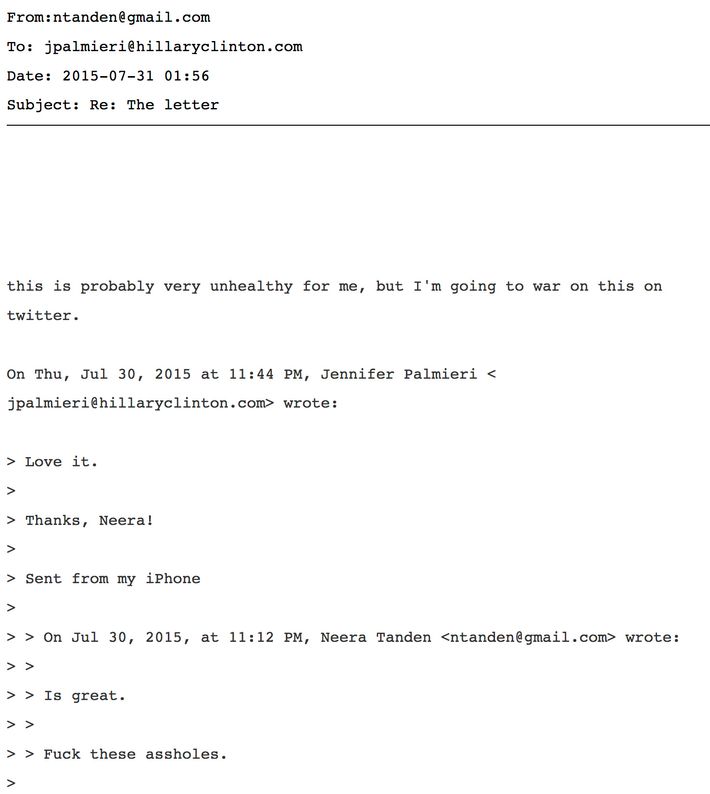 The apparent context is that, in the summer of 2015, some activists were assailing Clinton for using the phrase “all lives matter.” Clinton had also said “black lives matter,” and the point of the phrase is precisely that one can recognize the special threat to black lives by law enforcement without denying the value of other lives.

7. Hillary Clinton should have just returned the damn money she got to speak to the banks: 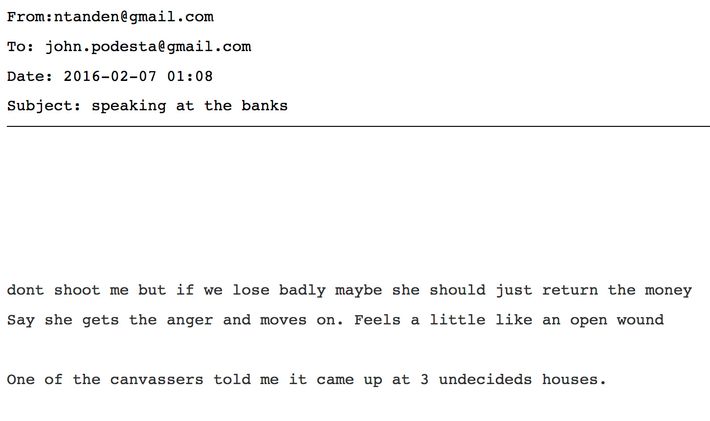 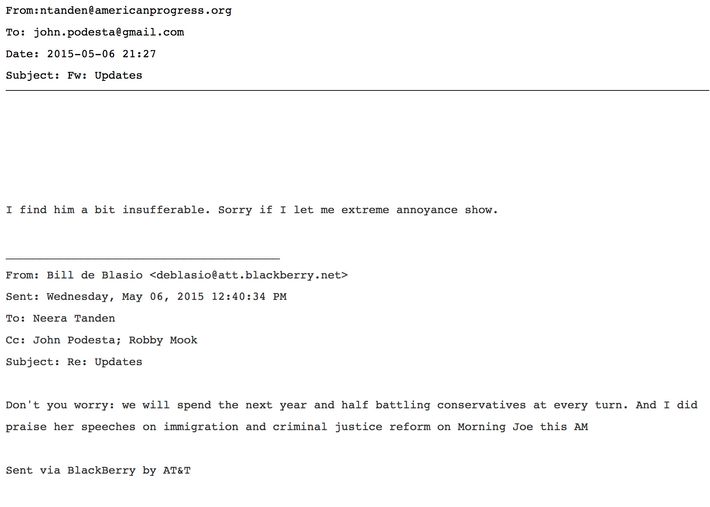 The context is de Blasio’s 2015 publicity tour, in which he attempted to position himself as a national leader of the progressive cause, dismissed Obama and Clinton as insufficiently committed to the progressive agenda, and said, “A lot of people outside New York City understand what happened in the first year of New York City better than people in New York City.”

9. The Center for American Progress spawned some serious anti-Clinton “freaks”: 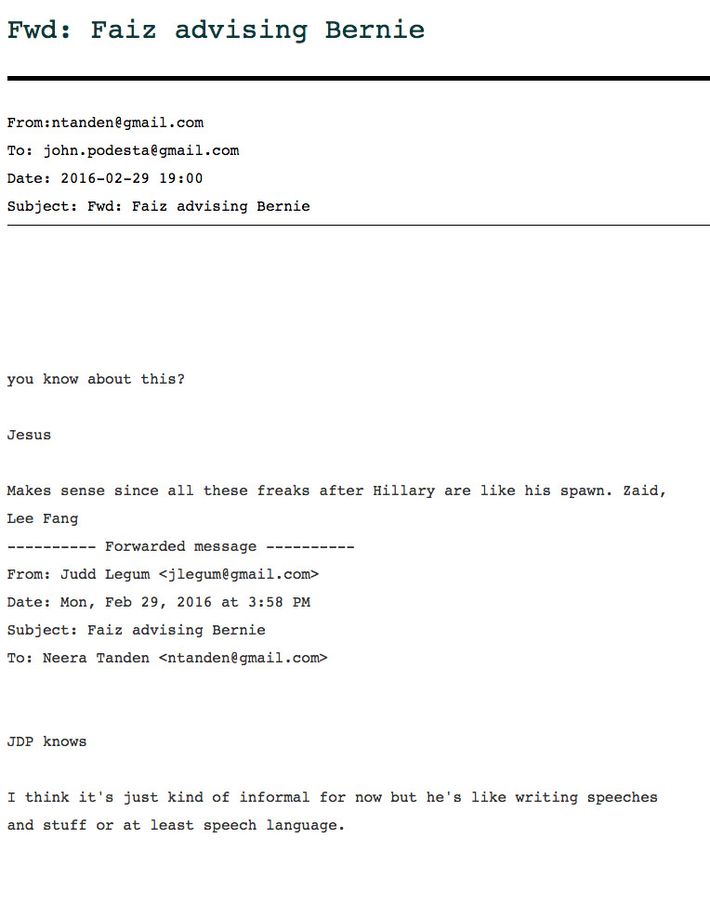 The broader context here is that CAP nurtured a left-wing clique that frequently quarreled with Tanden over such questions as whether Tanden violated their safe space by allowing Benjamin Netanyahu to deliver a speech at CAP or sanctioning one of them for using anti-Semitic terms. Several of those CAP alumni have since become harshly critical of the Democratic Party and liberals in general.

Tanden believes passionately in the liberal cause and has special reverence for Hillary Clinton. But she is able to reconcile those beliefs with the perfectly clear understanding that her candidate of choice has horrendous political instincts. The most reassuring thing to hear about a Clinton presidency would be that Tanden is in the room, saving her from the freaks, hacks, and herself.