Aside from the crotch-grabbing, dictator-loving, refusal to disclose his taxes, Muslim-banning, constant fraud, and other distinct touches Donald Trump has brought to the campaign, it bears mentioning that he would also unleash catastrophic, runaway climate change. Trump and the Republican Congress promise to immediately repudiate the Paris Climate Agreement and tear up all domestic regulation related to climate change.

A new study by Lux Research projects that Trump would reverse eight years of declining emissions under the Obama administration: 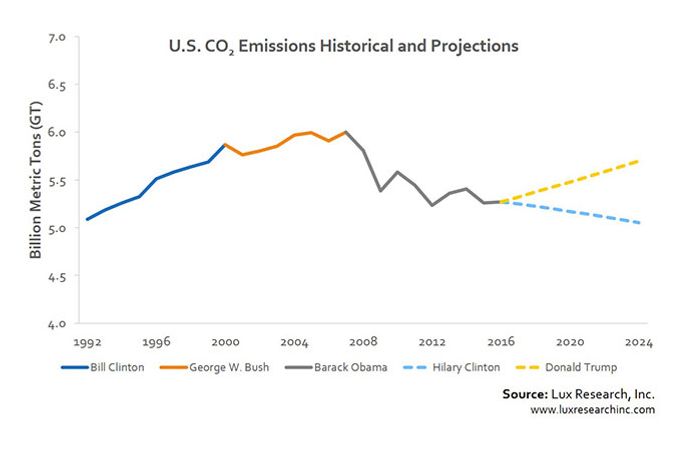 The real damage this would do is harder to calculate directly, since it depends on the overseas ramifications. The first international agreement to reduce greenhouse-gas emissions was forged less than a year ago, and relies upon delicate negotiations in which the Obama administration’s promise to reduce emissions played an integral role. The crucial role of American leadership, and demands for reciprocity by developing countries, suggests that if the United States embraced a drill-baby-drill policy, other countries would respond in kind. It would be very hard to rebuild an international consensus for cooperation once the United States has demonstrated that one of its major parties is willing and able to shut down all limits on carbon emission anytime it wins an election.

At some point, green energy will get affordable enough that there will be little economic incentive to burn fossil fuels. In the meantime, the Paris Climate Agreement is the main thing standing between the planet and rapid, runaway global warming with staggering costs to humanity. Trump’s presidency would probably unleash one of the greatest calamities in human history. And hardly anybody is talking about it! None of the presidential debate moderators brought up climate change, and the issue has barely featured in Clinton’s most prominent attacks (which are, sensibly enough, focused on the ways her opponent veers off from the normal-crazy Republican line rather than the ways he conforms to it). And, to be fair, it is hard to focus on a catastrophe that will mostly plague future generations when we are staring the imminent election of an authoritarian goon in the face.

Still, Trump’s plan to resume unlimited greenhouse-gas emissions is really, really bad, and the chance it might come to pass next week is quite terrifying.

+Comments Leave a Comment
By the Way, a Trump Presidency Would Also Cook the Planet

THE FEED
9 mins ago
early and often
early and often
Trump Won’t Go Away Unless a Republican Actually Beats Him
By Ed Kilgore
The 2024 invisible primary is well underway, and Donald Trump is winning it, wishful thinking aside.
24 mins ago
sports
sports
The Empire State Building Should Stop Doing This
By Benjamin Hart
Commemorating a sports rival’s victory is uncouth and unnecessary.
12:24 p.m.
tyre nichols
tyre nichols
A Sixth Officer Has Been Suspended After Tyre Nichols’s Death: Updates
By Intelligencer Staff
The officer was relieved of duty the same day the five officers charged with murder were fired for the beating.

10:43 a.m.
politics
politics
Tyre Nichols’s Parents Will Attend Biden’s State of the Union
By Nia Prater
The Congressional Black Caucus extended the invitation.
10:00 a.m.
screen time
screen time
Why Does It Feel Like Amazon Is Making Itself Worse?
By John Herrman
The “everything store” has gotten junkier and more chaotic. But, for the company, it’s only good business.
8:00 a.m.
the inside game
the inside game
Joe Biden’s Big Lesson From the Last Debt-Ceiling Fight
By Gabriel Debenedetti
And why this time is totally different from 2011. Hopefully.
1/29/2023
early and often
early and often
Trump’s First 2024 Pitch: It’s Me or World War III
By Chas Danner
The former president had some things to say at his first two official campaign events over the weekend.
1/29/2023
talking about the weather
talking about the weather
This Is a Snow Lover’s Nightmare
By Benjamin Hart
New York has broken a snowless record — and there’s no end in sight to this gray misery.
1/29/2023
2024 vision
2024 vision
2024 Looks Very Dark for Senate Democrats
By Ed Kilgore
Or why the party really, really needs Joe Manchin.
1/28/2023
the system
the system
Tyre Nichols and the End of Police Reform
By Zak Cheney-Rice
His death is evidence that cosmetic change can’t excise the rot of American law enforcement.
1/28/2023
fear vs. fun
fear vs. fun
Phone, Keys, Wallet, Test Strip
By Kyra Breslin
Checking for fentanyl is becoming a necessary ritual of nightlife.
1/27/2023
early and often
early and often
Republicans Want Surrender, Not a Deal, on the Debt Ceiling
By Ed Kilgore
There can be no “bipartisan” solution to the debt-ceiling crisis when one party refuses to talk about the revenue side of the ledger.
1/27/2023
the talented mr. santos
the talented mr. santos
George Santos Commemorates Holocaust After Lying About It
By Nia Prater
The U.S. representative, who doesn’t actually have Jewish heritage but may have made antisemitic remarks, gave a speech on Holocaust Remembrance Day.
1/27/2023
early and often
early and often
McDaniel Hangs Onto RNC Gavel Despite DeSantis Defection
By Ed Kilgore
Harmeet Dhillon threw a scare into the chair of the RNC, but even late support from DeSantis didn’t convince party voters away from backing McDaniel.
1/27/2023
early and often
early and often
Judge Orders Release of Video Showing Attack on Paul Pelosi
By Matt Stieb
The body-cam footage of the responding officer shows Pelosi and assailant David DePape struggling over a hammer before the assault.
1/27/2023
early and often
early and often
Republicans Are Already Burying Their Kooky National Sales-Tax Plan
By Ed Kilgore
McCarthy promised a floor vote on the Fair Tax, which would create a 30 percent national sales tax and abolish the IRS. Now, it may die in committee.
1/27/2023
the talented mr. santos
the talented mr. santos
Here’s Every Single Lie Told by George Santos
By Matt Stieb
Navigating the many exaggerations and falsehoods of New York’s newest representative.
1/27/2023
the national interest
the national interest
The Durham Probe Was Barr’s Witch Hunt
By Jonathan Chait
A shockingly unethical crusade to vindicate Trump.
1/27/2023
just asking questions
just asking questions
How an 18-Year-Old Got His Crossword Puzzle Into the Sunday Times
By Benjamin Hart
High-school senior Garrett Chalfin on winning over the editors — and the jocks at summer camp — with wordplay.
1/27/2023
guns
guns
Coming Soon to Stores: The AR-15 for Kids
By Matt Stieb
Next month, an assault-style rifle could wind up in the hands of children unless regulators step in.
1/27/2023
early and often
early and often
The Data-Driven Strategy Behind Democrats’ State-Level Success in 2022
By Eric Levitz
The president’s party almost always loses state-level power in midterm elections. Here’s how Democrats bucked that trend last year.
1/26/2023
early and often
early and often
Brian Kemp for President Makes a Lot of Sense
By Ed Kilgore
Georgia’s governor doesn’t have the warmest personality. But in trouncing both Donald Trump and Stacey Abrams, he showed world-class political chops.
1/26/2023
master of the garden
master of the garden
James Dolan on Blacklisting His Enemies: I Have Rights, Too
By Matt Stieb
The MSG owner defended his use of facial recognition to ban lawyers who have sued him in a highly entertaining local-TV rant.
1/26/2023
screen time
screen time
How Much Does Unbanning Trump Really Matter?
By John Herrman
On the internet, you can never really go back home.
1/26/2023
2024 senate races
2024 senate races
Adam Schiff Runs for Senate on the Enemies He’s Made
By Ed Kilgore
Trump and Republicans inadvertently elevated a mild-mannered moderate who is taking his shot at Dianne Feinstein’s seat.