The GOP’s decision to crown the birther king as its standard-bearer was an unprecedented triumph for the far-right fever swamp. But it also presented the media personalities who populate that infotainment complex with an unprecedented challenge: In a world where the Republican nominee raves about elections rigged by international bankers, calls for his political rival’s imprisonment (in between joking about her assassination), and insinuates that Barack Obama is in cahoots with ISIS, how, precisely, is an info-warrior supposed to retain his outsider’s edge?

The answer, apparently, is to abandon conspiracy theories that merely span the entire globe, and embrace ones that extend into paranormal realms.

Last month, Trump surrogate and InfoWars host Alex Jones revealed that Hillary Clinton is not simply an especially craven member of the Illuminati, but rather, a literal demon birthed in the bowels of hell.

“She is an abject, psychopathic, demon from hell that as soon as she gets into power is going to try to destroy the planet,” Jones explained. “I mean, I was told by people around her that they think she’s demon-possessed, okay … They say, listen, Obama and Hillary both smell like sulfur … And they say listen, she’s a frickin’ demon and she stinks and so does Obama. I go, like what? Sulfur. They smell like hell.”

Jones has always been a bit of oddball, even among the guns, gold, and food-insurance purveying crew (few right-wing radio hosts are as comfortable playing on “9/11 was an inside job” terrain).

But on Friday, the Drudge Report — along with less-well-known conservative sites Danger and Play and Conservative Outfitters — joined InfoWars in the realm of quasi-theological conspiracy theorizing by covering the “most disturbing email leaked from Hillary Clinton’s inner circle.” 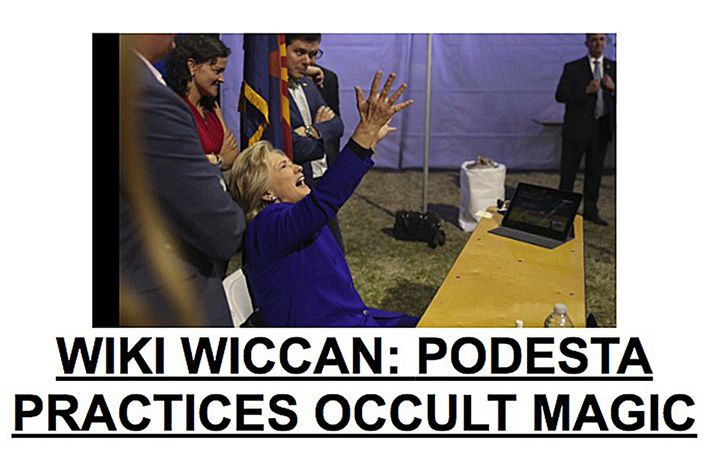 As for the long answer: Late Thursday night, someone discovered this dispatch from the latest WikiLeaks dump of Podesta’s hacked emails:

I am so looking forward to the Spirit Cooking dinner at my place.

Do you think you will be able to let me know if your brother is joining?

The Tony addressed here is John’s brother, a powerful lobbyist and, as Spin’s Andy Cush notes, a prominent collector of contemporary art. The message here is, ostensibly, a dinner invitation that makes playful reference to one of Abramovic’s past works.

But the title of that work made the far-right’s hair rise beneath its tin-foil hat: According to InfoWars, “Spirit Cooking,” refers to “a sacrament in the religion of Thelema,” which was founded by alleged “satanist Aleister Crowley.” (This definition was sourced from Everipedia).

WikiLeaks, for its part, encouraged such sinister interpretations.

The Podestas' "Spirit Cooking" dinner?
It's not what you think.
It's blood, sperm and breastmilk.
But mostly blood.https://t.co/gGPWFS3B2H pic.twitter.com/I43KiiraDh

In fact, “Spirit Cooking” is the name of a series of etchings Abramovic debuted in the mid-’90s, which included absurdist recipes featuring such ingredients as “fingertips of the artist” and “a ruby that has been soaking for three days.”

To its credit, InfoWars does intimate that this famous performance artist’s occult recipes may, perhaps, be performance-art-related, noting that “Spirit Cooking” involves “an occult performance during which menstrual blood, breast milk, urine, and sperm are used to create a ‘painting’.”

Alt-right blogger Mike Cernovich, however, sees through that flimsy alibi, explaining that Abramovic’s “Spirit Cooking” is not done for the edification of museumgoers, but for the titillation of those who attend the Clintons’ “sex-cult rituals.” And while you might be skeptical of that claim, Cernovich has video proof:

Those brainwashed by hoaxing media will find this outrageous, until they watch the video from a 1997 “performance.” Occult symbolism, as I’ve reported on extensively, is done openly to taunt the public. It’s a form of power and control. Secret Societies do not want to remain secret.

Some may look at that video and see a piece of late-’90s performance art. Others, apparently, see a secret society mocking conservatives by rubbing their noses in its satanic deviance (under the guise of self-expression).

The latter view fits the Abramovic email into a broader far-right theory that, hidden in the seemingly mundane WikiLeaks’s missives, are coded instructions pertaining to the Clinton’s secret child-sex ring.

BREAKING: Redditor may have connected a child abductor who was caught stealing children in Haiti with the Clintons.https://t.co/REW7RwPn4S

Search all Podesta emails for these keywords. We are uncovering a child sex ring.#PodestaEmails28 pic.twitter.com/h6N6O76sAw

It’s hard not to think some of this stuff is tongue in cheek. But then, a year and a half ago, “Donald Trump for president” also sounded like a joke. Regardless, if far-right media is forced to keep outflanking a Trumpist GOP, its most impressionable audience members are going to be at a high risk for psychosis.