The alt-right, the loosely affiliated movement of fascists, monarchists, trolls, and hangers-on that spurred much of Trump’s online support this year had been waiting for Tuesday for months.

To anyone reading the Clinton-friendly forecasts of prominent election pundits, the alt-right’s blind faith in Trump’s eventual success has seemed almost quixotic. But now we have to confront how a pundit class missed what bunch of 17-year-old memelords saw. Over the course of the day, and especially the night, Trump’s continual defiance of pundit expectations and polling data brought his most ardent online fans back from the brink. The night ended as it was always going to, regardless of the results: with Trump supporters and trolls ridiculing cucks, women, minorities ethnic and religious, and liberals.

Things got off to a bad start on 4chan’s /pol/ board, an alt-right hive of scum and villainy. Some of the most popular posts floating around yesterday involved people learning that they had to register to vote well in advance of the election. (Worth noting up top: Anyone can post anything on 4chan anonymously. They may very well be exaggerating or, more likely, lying.)

One person managed to vote for Trump, but managed to screw it up on the really important issues.

Another young voter learned an important lesson about fashion. 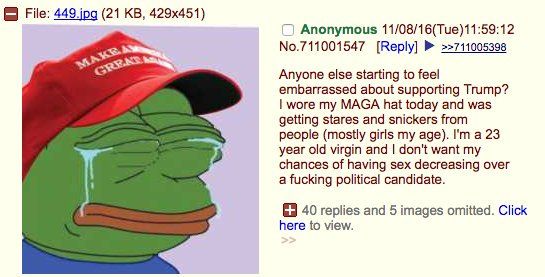 Some expressed concern over the voting machines, which are obviously rigged to discount Republican votes, because they are all built by companies owned by George Soros.

Others were just really scared about reports that Republican turnout was low across the board. What if they had wasted all of their meme magic?

And then … Trump started to win. He won Florida.

He started gaining leads in states that polling had suggested were a lock for Clinton.

Looks like it's going to be extremely close. Let's just put Trump and Hillary in a fight to the death, cage match style. Winner is prez.

They started giving Trump their energy and posting threads of dance GIFs. They started cheering for Trump as if he were a top-tier Dota team. 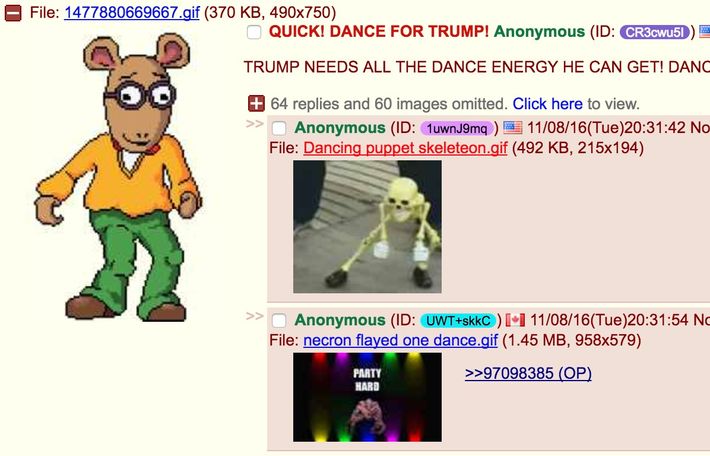 Trumpkins over on the subreddit r/The_Donald perform similar cyber rituals.

Twitter’s crazy conservative uncle, Bill Mitchell, a radio host whose near-mystical predictions of a Trump win made him something like the alt-right Nate Silver, was pretty sedate for most of the night.

I guess maybe it's better to have a ground game in our hearts after all?

And then the conspiracies started.

Then Pennsylvania flipped, which was pretty much the end of the race. 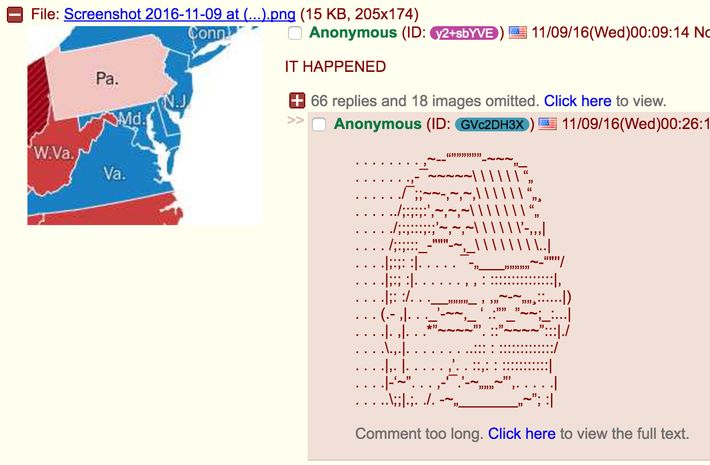 The tone from there through to Trump’s victory speech turned less angry and more astonished. /pol/ read like 4chan had pulled off an upset in a Counter-Strike match, rather than an globally destabilizing electoral victory. 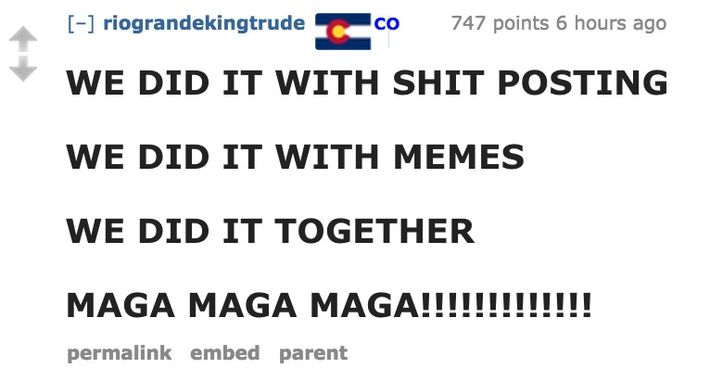 Even Scott Adams, the Dilbert guy, got adoration. 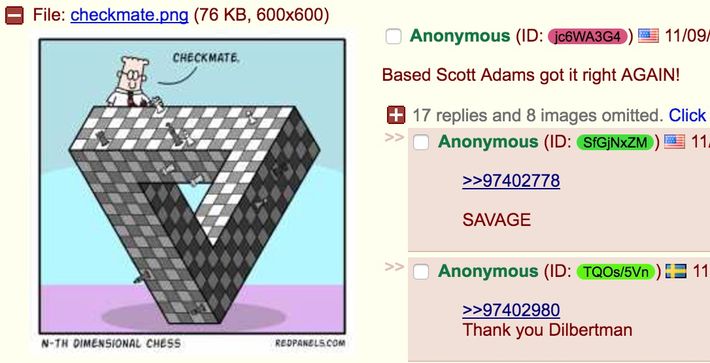 Though, make no mistake, there was plenty of racism, misogyny, and anti-Semitism too. 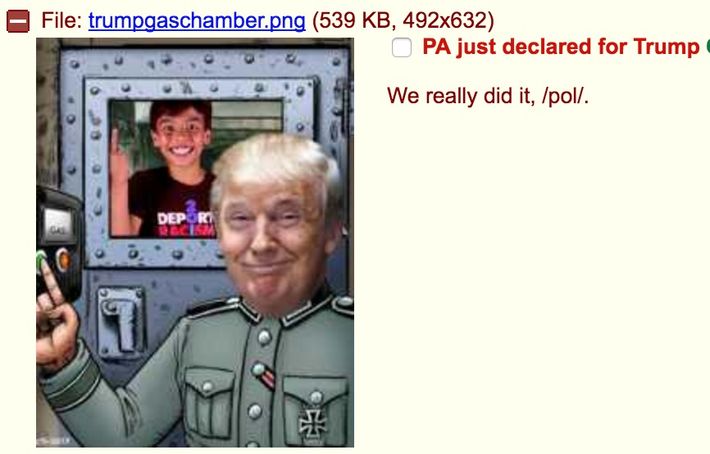 The alt-right memers are bathing in their post-election glow. And then they get back to work. Supporting a Trump presidency with their “meme magic.” For the next four years.

THE FEED
24 mins ago
early and often
early and often
The NYC Media Might Have Cost Democrats the House
By Eric Levitz
After New York outlets hyped rising crime, counties in the NYC media market voted more Republican than their immediate neighbors.
11:37 a.m.
world cup
world cup
The Five Most Dramatic Subplots Ahead of U.S.-Iran
By Benjamin Hart
As the geopolitical foes square off in Qatar, there’s a lot hanging in the balance.
8:00 a.m.
early and often
early and often
Joe Biden Is Realizing Trump’s ‘America First’ Vision
By Eric Levitz
The president is alienating allies and waging economic war on China to ensure America’s industrial supremacy.