In October 2015, as Donald Trump was gaining steam in the Republican primary, a quote began circulating that, for any other GOP member, might have ended their campaign. In 1998, as the story goes, Trump told People, “If I were to run, I’d run as a Republican. They’re the dumbest group of voters in the country. They believe anything on Fox News. I could lie and they’d still eat it up. I bet my numbers would be terrific.”

The quote was too good to be true. Sites like Snopes and Politifact quickly debunked it as a lie, or more specifically, could not find a primary source. There is no record of Trump saying this quote in People, though he has more broadly expressed political ambitions for decades. Despite the quote’s repeated debunking, it has shown up across social media consistently throughout the campaign in an attempt to derail the Trump Train. 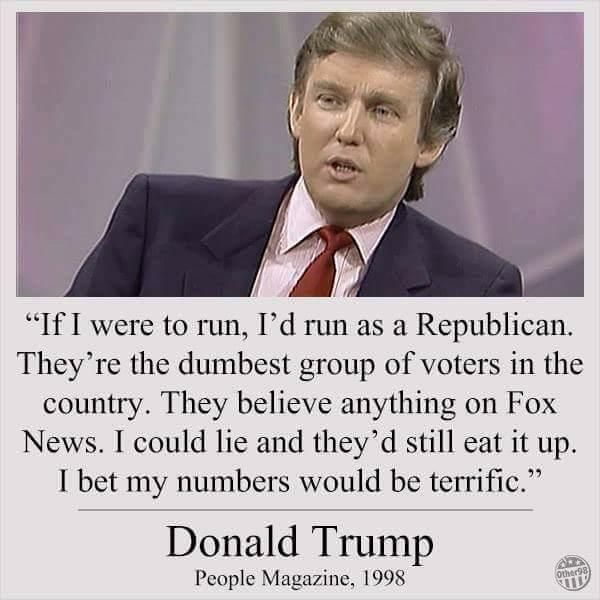 While all of the fact-checking has determined that the quote is most certainly fake, the origins of the fakery are shrouded in mystery.

Snopes obtained the quote via an image emailed to them, one of the type meant to go viral on Facebook, and they first wrote about it on October 16, 2015. The image they cite has a watermark from the popular liberal Facebook page the Other 98%, one of the largest of a new genre of publication that exists mainly on social media and is dedicated to preaching to the choir.

Combing through Other 98%’s archive reveals that the above image has since been removed. Presumably, they were made aware of the quote’s dubiousness and deleted it. A similar but not identical image, from the page of Rude and Rotten Republicans, features the quote as well. Edit history on the post shows that it was debunked within three hours of going live, but rather than remove it, the page left it up with a link to the Snopes entry. “SNOPES HAS THIS QUOTE AS ‘probably false’, which means he MAY or MAY NOT HAVE SAID IT,” the author amended. 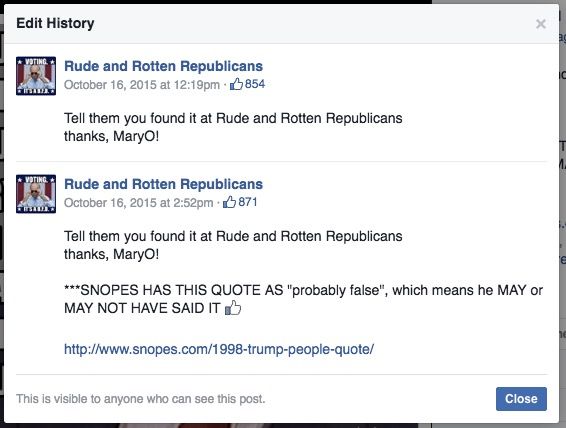 What is clear is that before October 15, 2015, the fake Trump quote simply did not exist at all. Querying multiple search engines and restricting publication date to prior to mid-October reveals no record of the Trump quote. Its appearance on the web (at least, the web indexed by Google and Bing) is like the Big Bang — it was nowhere, and then everywhere all at once. Circumstantial evidence would point to the Other 98%’s post as the flashpoint, such as Snopes’s acquisition of the image via email (a form of dark social). Messages sent to the Other 98% seeking more information about their deleted post went unreturned.

It gets weirder when you travel further down the rabbit hole. The photo of young(er) Trump accompanying the quote is taken from an interview he participated in with Oprah in 1988. A popular clip posted by OWN in late June 2015 called “Donald Trump Teases a President Bid During a 1988 Oprah Show” contains the footage from which the macro’s image was taken.

Below it, however, peppered in the comments section are claims that this excerpt does not contain the entirety of Trump’s statement. Commenters allege that the clip ends prematurely.

Similar comments appear on another version of the clip.

Is this a media conspiracy? Hardly, it’s just an elaborate troll, the origins of which are … unclear. Searching through 4chan archives finds little discussion of the quote, and no centralized organization of a prank. At least one YouTube commenter has admitted to trolling (another’s Dat Boi–inspired username implies a similar origin).

Simple chronology would debunk whether the fake quote, which mentions Fox News, was stated during the 1988 Oprah interview. Fox News launched in 1996, and the general idea of the “Fox News Republican” came to the fore during the Bush-era run of Jon Stewart’s Daily Show.

Still, there is a curious Mandela Effect pervading the quote. The most active Reddit thread on its origins contains repeated assertions from people who claim to have seen the clip, and then, when they tried to watch it again, were unable to find it. Many of the users commenting in the thread show little other Reddit activity.

Sunflowers71 writes, “Yes ! I saw the same video and when I went to search for it this morning to prove for a friend- it’s GONE! Wth! How is this even legal???? How can a video just go missing!??!” It is the only comment tied to their account.

Carem421, whose only two Reddit comments are on the thread about the quote, writes:

I absolutely without an inkling of doubt saw the video!! I thought to myself I can’t wait till it’s plastered everywhere on tv. I had a conversation with my Uber driver 2wks ago, discussing all things insane about Trump. When I mentioned the video she responded with, “you saw that video?” I’m just now realizing why she asked me that with a sort of surprised but affirming reaction..it’s bc it’s gone, no where to be found! Itellecual property laws is the reason why these things disappear. Everyone, the next time a controversial damaging video appears, weather you’re for or against, we need to find away to record it! Use someone else’s phone to video the video if you have to! We then can repost it, even if it’s only for a few days before it gets pulled, we will still have proof! [sic]

I saw the video too. My ex-wife (who I get along well with) forwarded me the link. I watched it and thought, ‘wow, what a gaff, this is going to haunt him in this race.’ After that I didn’t think much of it. Today I tried to find it and saw all these claims from Snopes and others saying that it was false - he never said such a thing in People Magazine (or any other publication or interview). Indeed, it’s been scrubbed from the net. I was never one to believe that the powerful had ‘that’ much power over the net, but after seeing this it appears they do indeed.

It’s obvious why the quote has been so pervasive. It helps “true” Republicans cast Trump as a RINO, and it helps liberals cast Trump as an oligarch with disdain for the average American citizen. Both stand to benefit from the quote’s veracity. But it is fake, and with any luck, it will die out after next week.

Trump’s fake quote is this entire election in a nutshell. Who’s angry, who’s laughing, and who’s just messing with everybody else? There are no clear delineations, because all of our internet comments are presented in the exact same format. Over and over, liberal pundits have said, “Surely, this will be the thing that takes down Trump.” But it never happens. It’s now at the point that people have invented a MacGuffin, hiding out there, sending the desperate on a wild goose chase.