In his interview with the New York Times, Donald Trump expressed more flexibility on climate change, which he has previously called a hoax created by China. That is the good news. The bad news is that Trump’s lack of commitment to the cause of climate-science denial is rooted in a comprehensive failure to grasp the issue. The few snippets of concrete factual information he has to ground his beliefs are mostly false. His New York Times interview forced the president-elect to grapple with the issue in more depth than he did at any time during the campaign (the three debates had no questions on this issue, and climate-change policy in general received vanishingly little attention from the media). The portrait that comes out of the interview is one of almost complete ignorance.

Trump began by promising “an open mind.” Then he began to defend his denialist position:

You know the hottest day ever was in 1890-something, 98. You know, you can make lots of cases for different views. I have a totally open mind.

The hottest single day on record is not relevant to a problem centered on increased average temperatures. The reality is that the Earth has seen a long-term rise in surface temperature:

Trump then cited the authority of his late uncle:

John G. Trump was a physicist and engineer, not a climate scientist. And he died in 1985, a time when the scientific consensus on anthropogenic global warming was far less solid than it is today.

Trump then moved on to hacked emails among climate scientists:

I know we have, they say they have science on one side but then they also have those horrible emails that were sent between the scientists. Where was that, in Geneva or wherever five years ago? Terrible. Where they got caught, you know, so you see that and you say, what’s this all about.

He is referring here to a popular right-wing conspiracy that claimed that scientists were conspiring to falsify climate data to support their theory. This claim has been debunked.

Trump then begins rambling about other environmental issues:

And you know, you mentioned a lot of the courses. I have some great, great, very successful golf courses. I’ve received so many environmental awards for the way I’ve done, you know. I’ve done a tremendous amount of work where I’ve received tremendous numbers. Sometimes I’ll say I’m actually an environmentalist and people will smile in some cases and other people that know me understand that’s true.

What any of these disconnected sentiments have to do with his beliefs about greenhouse-gas emissions is difficult to tell. He seems to want to assert his authority as a good guy for the environment without connecting this element of his self-image to his policy agenda for the U.S. government.

Sensing the drift, the Times tries to refocus Trump on the question of whether he accepts the scientific connection between greenhouse-gas emissions and rising global temperatures. Trump replies:

There are two revealing things about this snippet. First, Trump concedes that there is “some” connection between the atmospheric concentration of heat-trapping gasses and higher temperatures, but will not say how much, or whether this has any bearing on policy. Instead he moves directly to the cost to American companies, saying the answer to the scientific relationship depends on the cost to American companies. Of course, one could make a coherent argument that climate change is real, but any particular policy response fails the cost-benefit test. Indeed, many conservatives embarrassed by having to defend anti-scientific conspiracy theories have urged Republicans to shift their line of defense in just this way. But Trump is giving the game away by explicitly linking the two arguments.

Later in the interview, Trump is asked about using his meeting with Nigel Farage, in which Trump lobbied against an offshore wind farm that he believed would mar the vistas at a Trump-owned golf course. Trump defending this blatant display of self-interest as a consistent application of his overarching hatred for wind energy:

I mean, the wind is a very deceiving thing. First of all, we don’t make the windmills in the United States. They’re made in Germany and Japan.

This is wrong. American wind-turbine manufacturers and their supply-chain have a large domestic presence: 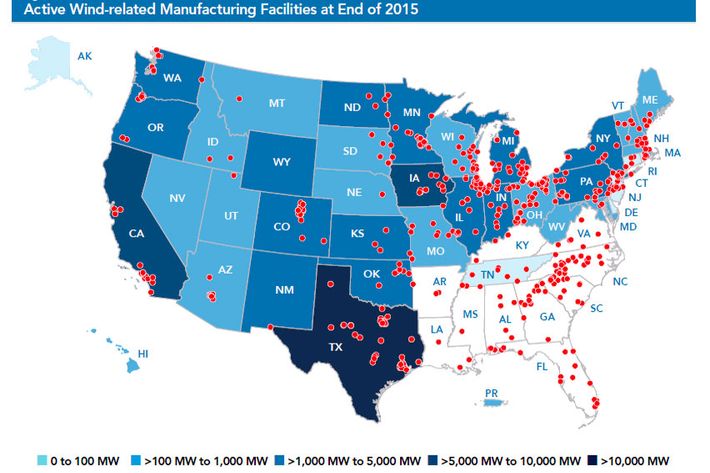 Trump then begins to ramble again:

They’re made out of massive amounts of steel, which goes into the atmosphere, whether it’s in our country or not, it goes into the atmosphere. The windmills kill birds and the windmills need massive subsidies. In other words, we’re subsidizing wind mills all over this country. I mean, for the most part they don’t work. I don’t think they work at all without subsidy, and that bothers me, and they kill all the birds. You go to a windmill, you know in California they have the, what is it? The golden eagle? And they’re like, if you shoot a golden eagle, they go to jail for five years and yet they kill them by, they actually have to get permits that they’re only allowed to kill 30 or something in one year. The windmills are devastating to the bird population, O.K. With that being said, there’s a place for them. But they do need subsidy. So, if I talk negatively. I’ve been saying the same thing for years about you know, the wind industry. I wouldn’t want to subsidize it. Some environmentalists agree with me very much because of all of the things I just said, including the birds, and some don’t.

Yes, the birds. Some birds do die via wind turbine, and it is very sad for them. On the other hand, unchecked climate change will create mass species extinction. Even if Trump somehow cares more about animals than effects on human life, opposing an important component of the response to climate change on animal-loving grounds is bizarre.

10/22/2021
mike pence
mike pence
For Mike Pence, Running a Doomed Presidential Race Is a Living
By Ed Kilgore
The former veep doesn’t have to be a plausible presidential candidate to stay on the gravy train.
10/22/2021
the city politic
the city politic
City Hall Starved Taxi Drivers Before They Went on Hunger Strike
By Errol Louis
How driving a cab became a dead end.
10/22/2021
explainer
explainer
What to Know About Booster Shots, Now
By Paola Rosa-Aquino and Chas Danner
Countless Americans are now eligible for a booster dose of any of the three U.S.-authorized COVID vaccines.
10/22/2021
public safety
public safety
The Police’s Farcical War on Vaccine Mandates
By Zak Cheney-Rice
It turns out cops may not have a special appreciation for the sanctity of life after all.
10/22/2021
politics
politics
Anybody Can Be Joe Manchin Right Now
By Ben Jacobs
A clutch of Democrats threaten to torpedo Biden’s agenda unless he agrees to lower taxes for middle-class blue-staters.
10/22/2021
build back better
build back better
The Democrats Have a Collective-Action Problem
By Eric Levitz
Can Joe Biden’s agenda survive the competing claims within his own party?
10/22/2021
covid-19
covid-19
Booster Shots Are Now Approved for All of the COVID Vaccines
By Nia Prater
Additional dose recommended for all with J&J and many who got Moderna, with “mix and match” allowed for all varieties.
10/22/2021
new york
new york
Chuck Schumer Endorses India Walton for Buffalo Mayor
By Matt Stieb
A major Establishment boost for the socialist candidate.
10/21/2021
rikers island
rikers island
New Photos Show Horrific Overcrowding at Rikers Island
By Matt Stieb
Pictures obtained by the New York Post show up to 26 men held in a cell meant for a single detainee amid deteriorating pandemic conditions.
10/21/2021
the money game
the money game
What’s the Deal With Donald Trump’s SPAC?
By Michelle Celarier
After a surprise announcement, a Trump-linked stock skyrocketed — tripling in price and drawing in waves of retail investors.
10/21/2021
the sports section
the sports section
Baseball Teams Should Get to Pick Their Playoff Opponents
By Joe DeLessio
It’s much more fair-minded than the current system — and much more fun.
10/21/2021
the economy
the economy
Behold the Insane Traffic Jam at the Port of Los Angeles
By Benjamin Hart
The supply-chain crisis, up close.
10/21/2021
politics
politics
House Holds Steve Bannon in Criminal Contempt for Refusing to Testify About 1/6
By Nia Prater
The Justice Department will decide whether to charge him over his refusal to testify in the Capitol riot investigation.
10/21/2021
facebook
facebook
The Next Facebook Will Be an Endless Prison for Humanity. I Can’t Wait.
By Choire Sicha
Building the future one headset and wallet at a time.
10/21/2021
joe manchin
joe manchin
Is Manchin Considering Quitting the Democratic Party?
By Ed Kilgore
The West Virginian wants to issue a credible threat to Democrats to increase his leverage in negotiations over Biden’s agenda.
10/21/2021
sports
sports
Boston Celtics Games Blocked in China After Kanter Calls for a ‘Free Tibet’
By Nia Prater
In a nearly three-minute video, Kanter called Xi Jinping a “brutal dictator” and called for Tibetan independence.
10/21/2021
politics
politics
Trump’s ‘Truth Social’ Bans Telling Truth About His Twitter Rival
By Benjamin Hart
It’s a place where “tweets” are called “truths,” but mockery of the former president’s social-media site is not permitted.
10/21/2021
the national interest
the national interest
Biden Has Two Long-Shot Plans to Placate Kyrsten Sinema
By Jonathan Chait
Hail Mary time.
10/21/2021
racial justice
racial justice
Smearing Popularism Does Not Help Black Voters
By Eric Levitz
Persuasively rebutting David Shor requires scrutinizing his arguments, not stigmatizing them.
10/21/2021
power
power
Katie Couric Is Not for Everyone
By Rebecca Traister
After her long career as America’s beloved morning-news anchor, she has decided to write a wild, unflinching memoir focused on the messy parts. Why?
10/21/2021
the city politic
the city politic
Will Buffalo Elect a Socialist Mayor?
By Ross Barkan
It depends on the success of the incumbent’s extremely unusual write-in campaign.
10/21/2021
crime
crime
What It Was Like to Face the Monster of Sarah Lawrence
By James D. Walsh
My encounters with Larry Ray.