Paul Ryan does not really plan to go through with this, does he? Photo: Dominick Reuter/AFP/Getty Images 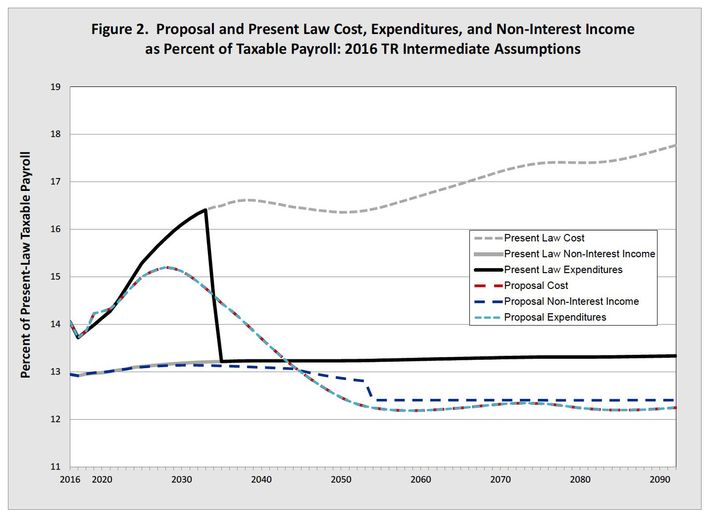 Why go lower than needed to balance the program’s revenue and its spending? Because the plan would clear room for a reduction in income taxes paid by affluent Social Security beneficiaries.

It is really hard to overstate just what a political catastrophe it would be for Republicans to try to pass a plan like this. Republicans have always been extremely skittish about messing with Social Security. When they tried to privatize the system in 2005, they very carefully exempted all current beneficiaries, and framed their plan as a no-lose chance for everybody to get rich through the stock market, with no downside for anybody. (Had their plan passed, the 2008 crash would have blown it to smithereens.) Even Republicans most eager to cut Social Security have promised not to make any cuts for current retirees or anybody retiring within a decade. But Johnson’s plan would beginning cutting as early as 2019.

As a public-opinion matter, it would be insane for Republicans to attempt to pass this bill. It would be almost as insane as a matter of voting mechanics. It would require not only 218 House votes but also 60 Senators to cut Social Security. (The Senate can pass fiscal bills with just a majority, but those bills, called reconciliation bills, are not permitted to touch Social Security.) That means, as in 2005, Democratic support would be needed to pass the bill. And the over/under on the number of Senate Democrats likely to vote for a bill like this is 0.0000000.

Republicans could eliminate the Senate filibuster to pass this bill. But that would still leave the problem that Donald Trump repeatedly promised not to cut the program, ever.

So it’s difficult to understand why Johnson would introduce a bill that stands so little chance of enactment at the cost of enormous pain. Obviously, the mere introduction of a bill in committee does not mean that Republicans will push to bring it to a vote next year. But why bring it up at all? Three possibilities spring to mind, in no particular order of probability:

1. Johnson likes the idea, and wants to start a discussion, with no expectation it will result in a law during the next two years.

2. Republicans actually plan to jam this through, perhaps in a rapid big-bang fiscal bill at the start of Trump’s term.

3. It’s part of a devious plan to introduce a deliberately radical, unpopular version of the idea, with the expectation that it will generate attention but not many Republican endorsements, allowing Trump to publicly attack it, burnishing his populist credibility.

I lean toward explanation No. 1. But who knows? None of these three explanations really makes much sense.

+Comments Leave a Comment
Are Republicans Crazy Enough to Go After Social Security?