The gulf between the scale of the Obama administration’s policy achievements, which run broad and deep, and public understanding of them, is one of the most striking things about his presidency. (Well, it’s striking to me, which is why I wrote a book about it.) The Pew Survey finds that Obama is highly popular, with a 58 percent approval rating. The public rates his likely historical standing fairly well: 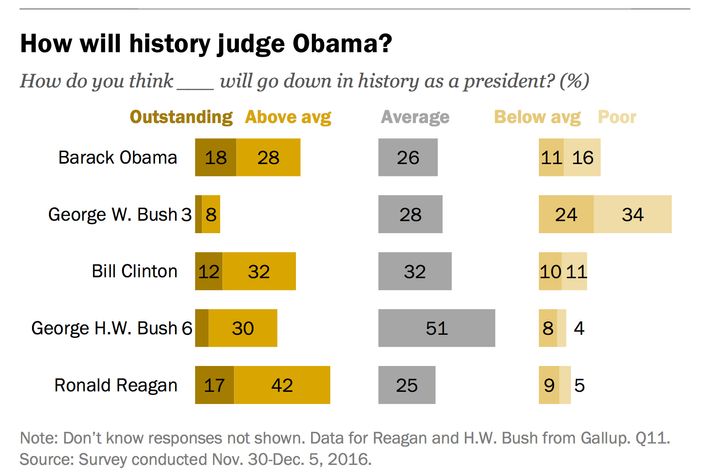 But when asked open-ended questions about his historical achievements, people don’t come up with much. Health-care reform is the most commonly cited Obama success, followed by his status as the first black president. Obama’s success in driving the green-energy revolution, culminating in the first international agreement to curtail climate change, might rank as his most important accomplishment to me, but it does not register at all with the public.

Of course, public opinion does not always capture presidents’ true policy imprint. Polls consistently show that John F. Kennedy is remembered as a great president, despite the paucity of accomplishments, while Lyndon Johnson (who transformed civil rights and the face of government, despite his failure in Vietnam) is viewed as as poor one.

What makes Obama unique is the generational quality of his support. Millennial voters drove both his election victories. And, while they grew disenchanted with gridlock during his presidency, and his popularity did not fully transfer over to Hillary Clinton, they have rekindled their enthusiasm for Obama in a major way: 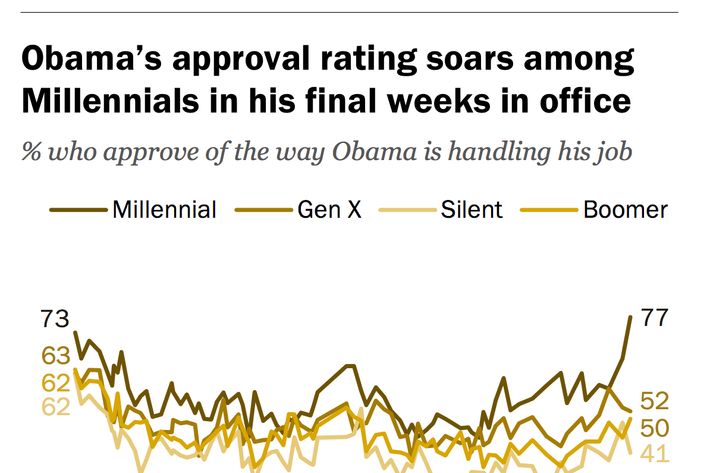 Obama will leave office as he came in: a potent representative of the political ideals of a rising generation of Americans. As his successor threatens much of his work, Obama is in a strong position to defend his legacy and maintain his standing as a broadly popular leader. The next four years may belong to the narrow, retrograde vision of Donald Trump, but the future still lies with the America of Barack Obama.