Going in for the Till. Photo: NICHOLAS KAMM/AFP/Getty Images

I have chosen one of the truly great business leaders of the world, Rex Tillerson, Chairman and CEO of ExxonMobil, to be Secretary of State.

Unlike many of Trump’s other cabinet nominees, Tillerson did not earn his bid on the strength of his sycophancy during the 2016 campaign. While men like Michael Flynn and Stephen Bannon secured their spots in the White House by joining Trump’s insurrection against the GOP Establishment, Tillerson came by his spot thanks to the hearty recommendations of two of that Establishment’s most vaunted members.

Per Politico, the ExxonMobil CEO was brought to Trump Tower for an interview after both former secretary of State (and, now, former anti-Trump Republican) Condoleezza Rice and onetime secretary of Defense Robert Gates put in a good word.

Rice and Gates also both count ExxonMobil among their consulting clients. Which is surely coincidental.

Once Tillerson got his foot in the door, it isn’t surprising that Trump would take a shine to him. The president-elect has a mysterious affinity for old, white, mega-rich businessmen. Add in Tillerson’s decades-long relationship with Putin — and his personal financial interest in ending sanctions on Russia, so as to fully utilize Exxon’s hard-won drilling rights in Siberia — and you have yourself a match made in heaven (and/or the Kremlin).

But if those latter qualities helped Tillerson win Trump’s heart, they also threaten to lose him Senate confirmation. Plenty of Republicans still enjoy rattling sabers toward Moscow. And Tillerson’s selection comes at a particularly inauspicious time — word of his appointment leaked less than 24 hours after news broke that the CIA believes Russia intervened in the U.S. election with the intention of boosting Donald Trump’s candidacy. With Democrats eager to paint Trump as an illegitimate foreign agent and hungry for any opportunity to hand him a defeat, the GOP’s Russia hawks shouldn’t have much trouble forming a bipartisan coalition against Tillerson’s confirmation.

Which means Rice and Gates are going to need to push hard to get their client across the finish line. Immediately following Trump’s announcement, both released statements cheering his decision.

Rice expressed her eagerness to welcome Tillerson to the “family of secretaries of State.” 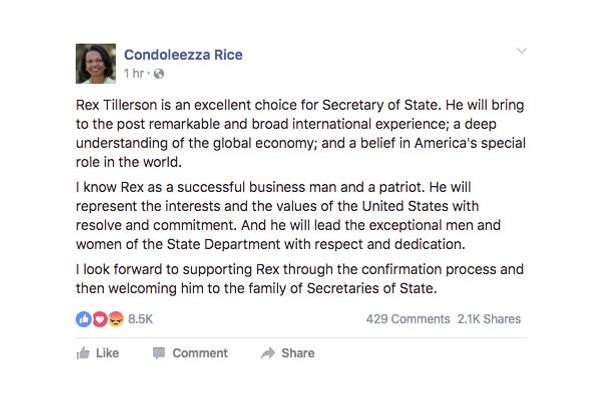 Gates, for his part, touted Tillerson’s “success in dealing with dozens of governments and leaders in every corner of the world.”

To his credit, Gates acknowledged his business relationship with Tillerson, but insisted their bond wasn’t sealed by money, but by their mutual enthusiasm for the Boy Scouts of America.

“While ExxonMobil is one of many clients of RiceHadleyGates Consulting, I met Rex years earlier through our mutual involvement in and leadership of the Boy Scouts of America,” Gates wrote. “I know this Eagle Scout will be a global champion for the best values of our country.”

Tillerson’s confirmation may hinge on his capacity to portray himself as more of an Eagle Scout than a Putin crony.

THE FEED
5:23 p.m.
the city politic
the city politic
Slain Cops Paid the Ultimate Price for Society’s Failures
By Errol Louis
The city must do more than praise the bravery of police it sends into harm’s way.
5:02 p.m.
2022 midterms
2022 midterms
Trump Nod Triggers Tennessee MAGA Carpetbagger Fight
By Ed Kilgore
The ex-president’s superfans are upset that he endorsed a former Fox contributor over their preferred candidate.
4:32 p.m.
economy
economy
Why Wall Street Freaked Out This Week
By Kevin T. Dugan
Nobody knows when the economy will get better.