Donald Trump has humiliated a lot of confident prognosticators over the past 12 months. And his coming administration seems likely to do the same. Over the course of his campaign, Trump’s stances on the issues of taxes, immigration, and foreign policy constantly evolved — while remaining resolutely skimpy on the fine details. At present, it is unclear whether he wants to directly spend billions of dollars on infrastructure investment — or just hand out tax break to his developer friends. It is clear that he wants to repeal Obamacare — or at least the parts he doesn’t like — but is far from certain what “terrific” system he wants to replace it with. And while Trump campaigned on his utter disinterest in risking American lives to promote democracy overseas, one of his first actions as president-elect was to provoke diplomatic tensions with China by offering the democratic government of Taiwan a gesture of support.

All this uncertainty may keep our temporarily embarrassed punditocracy from making bold assertions about what 2017 will look like. But the financial world has no choice but to lay down its bets.

On Wednesday, the Federal Reserve placed one such bet: Under Trump, tamping down inflation will be a greater concern than reducing unemployment. The central bank raised benchmark interest rates by a quarter of a point for the second time since the 2008 crisis, while also increasing the number of rate hikes it expects for 2017 from two to three.

These moves were influenced by many factors beyond Trump’s election. But they nonetheless suggest that the bank does not believe that the president-elect is going to try to pay off the national debt “over a period of eight years” — a campaign promise that would make inflation the least of our worries. Rather, the Fed’s move suggests that the bank shares the conventional wisdom that Trump will accelerate inflation via large tax cuts and an increase in defense and infrastructure spending.

Here are a few more concrete developments that Wall Street sees in its crystal ball.

The “great vampire squid wrapped around the face of humanity” is going to have an excellent four years.

It’s never really been a bad time to be Goldman Sachs. But that bank (which has been memorably likened to an enormous, malevolent squid) has had a spring in its step since November 8. The bank has outperformed all other 29 companies in the Dow Jones Industrial Average since Trump’s triumph. 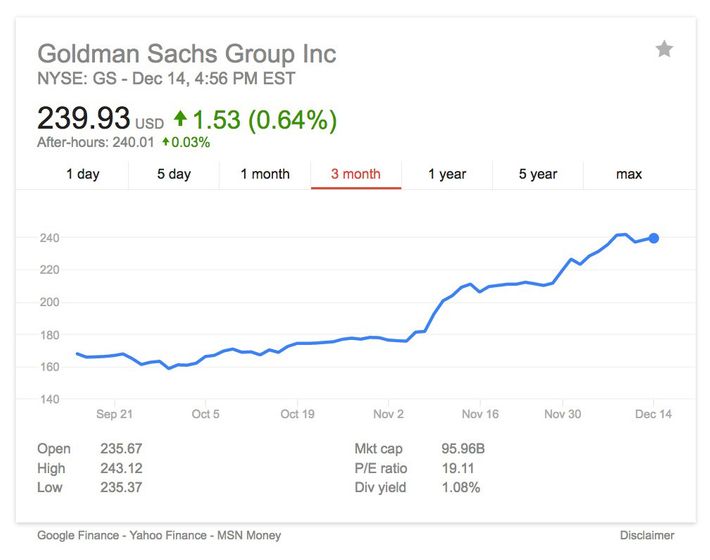 And the past month has been nearly as kind to Goldman’s peers in the financial sector.

Bank stocks highest since 12/2007 as they await Trump's deregulation pic.twitter.com/VCAeXgGsmi

It isn’t hard to see why. A Clinton administration threatened to burden Wall Street with more onerous regulatory requirements. That threat has now been replaced by the hope that Trump will kill off every part of Dodd-Frank that ever caused consternation in a lower Manhattan C-suite. And now that Trump has drawn his economic team exclusively from the ranks of the Illuminati, that hope looks quite safe.

Which is to say: You shouldn’t expect President Trump to honor the Republican platform’s call for the reinstatement of Glass-Steagall.

The infrastructure stimulus will happen.

Since Trump’s election, Caterpillar — the leading manufacturer of construction and mining equipment — has seen its share price rise by roughly 10 points. AK Steel has seen its share price nearly double since November 8, rising from a little over $6 to a little over 10. The raw commodities of steel and iron ore have also seen a post-election bounce.

This is about what you’d expect following the victory of a presidential candidate who campaigned on a $1 trillion infrastructure package. And yet, to lay observers, whether that package will ever be passed is far from clear. Congressional Republicans are far less interested in making new public investments than they are cutting taxes on the rich and taking health care away from poor people. What’s more, Trump’s official infrastructure plan, as of now, is largely a scheme for lining the pockets of construction-sector investors.

But the all-knowing market sees that in the end, the Steve Bannon wing of the White House will triumph, and America’s roads and bridges will crumble no more.

For-profit colleges are very good at attracting students (and their federal loan dollars) via savvy marketing. But they tend to be very bad at providing those students with a quality education. Thus, the Obama administration wrote a new rule that prevents students from using their federal loans at for-profit colleges that consistently leave graduates unable to compete in the job market.

So, it’s been a rough couple years for the “tricking people into spending their one chance at higher education on a well-branded, but deficient product” business.

But now, one of that industry’s own entrepreneurs is moving into the White House. And his choice for Education secretary is a longtime supporter of for-profit education.

And so, Wall Street expects Phoenix University to rise up from the ashes — or, at least, for its parent company, Apollo Education Group, to become more profitable. 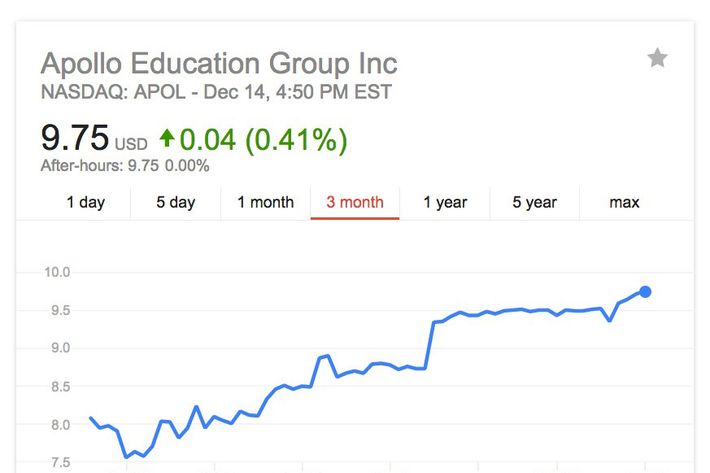 The smart money will be in prisons.

For-profit prisons have followed a similar trajectory. The Obama Justice Department announced plans to phase out its use of private prisons back in August, which did a number on the industry’s stock performance. But since Trump painted the Rust Belt red, CoreCivic — the for-profit jailer formerly known as the Corrections Corporation of America — has seen its share price soar. 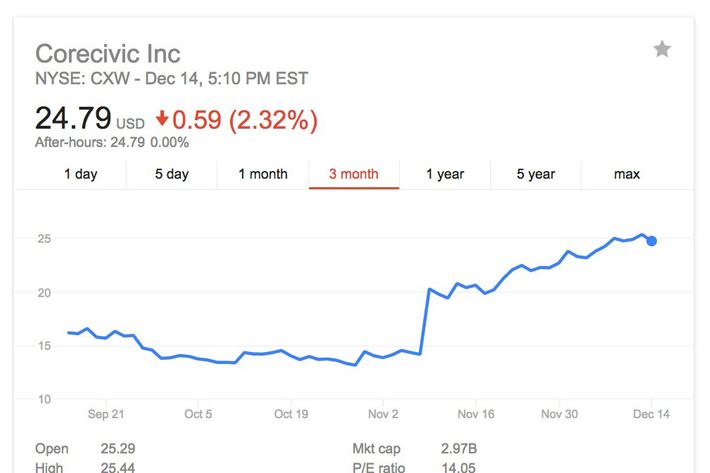 Thus, investors seem to expect that Trump will not only reverse Obama’s policy on private prisons, but also increase demand for their products. Which is to say, Wall Street sees a lot of detained immigrants and jailed lawbreakers in our future.

Post–Election Day, the Hospital Corporation of America’s stock has fallen nearly as sharply as Robby Mook’s.

The market seems to think the GOP will bite the political bullet and throw millions of people off their health insurance. Which would mean, among other things, that many more Americans will wrack up emergency-room bills that they have no means of paying. And that’s likely to put a dent in hospital profitability.

But no president can serve the interests of every economic sector at once. And, at the end of the day, which would you rather have: A thriving private prison industry or financially stable hospitals?