The funeral of a woman who died from an opioid overdose. Photo: Alex Wong/Getty Images

During the worst year of the HIV/AIDS crisis, 43,000 Americans lost their lives to the virus. In 2015, 52,000 died of a drug overdose. Never in recorded history had narcotics killed so many Americans in a single year; the drug-induced death toll was so staggering, it helped reduce life expectancy in the United States for the first time since 1993.

It also, arguably, helped put a demagogue with authoritarian tendencies into the Oval Office.

The opioid epidemic is a disaster with several authors. Economic stagnation may have played a role: Research by Angus Deaton and Anne Case found especially high rates of overdose among non-college-educated whites in economically disadvantaged regions of the country. Separately, a well-intentioned desire to treat chronic pain — an increasingly prevalent symptom in an aging population — was doubtlessly a factor.

But a great deal of blame belongs to our system of pharmaceutical patents, and the sociopathic greed that it incentivizes.

There is an irony to this: Drug patents’ ostensible reason for being is the virtuous incentives that they create. Pharmaceutical research is an expensive and uncertain endeavor — a company can invest millions in a potential treatment, only to see it fail during clinical trials. And yet, those investments are critical for the advancement of public health. Thus, the government provides pharmaceutical companies with a motivation for researching new drugs — and a means of recouping losses from failed experiments — by offering those companies a temporary monopoly on newly discovered medications.

This formula for pharmaceutical innovation has many downsides, the most well-appreciated being the price-gouging that patent monopolies enable. The American public is well aware that drug prices are too damn high. When breakthrough Hepatitis C treatments retail at $28,000 a month, or the price of an EpiPen shoots up 400 percent, the costs of patent-driven innovation are unmistakable. These stories have inspired such widespread political support for price controls on pharmaceuticals, drug companies spend upwards of $200 million a year lobbying Congress to ensure that no such controls — or any other profit-reducing regulations — are imposed on them.

But a less-well-understood hazard of the patent system is the enormous incentive it gives drug companies to conceal the harmful effects of their products: When you can sell a prescription painkiller at a price orders of magnitude higher than the cost of production, you end up with a multibillion-dollar motivation to ignore — or suppress — evidence that your drug does more harm than good.

For the past two decades, the makes of OxyContin have done just that, and generated $35 billion in revenue in the process. 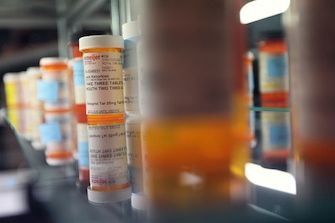 American doctors have been free to prescribe morphine and other generic opioid painkillers since the early 20th century. But they started prescribing such narcotics at drastically higher rates in the mid-1990s, when Purdue Pharma patented OxyContin, and began aggressively marketing the drug to doctors and patients.

The company held all-expenses-paid conferences for specialists, in which they treated the assembled physicians to fine food and wine — and seminars on OxyContin’s capacity to relieve chronic pain with little risk of engendering abuse or addiction.

Purdue conveyed that same message to patients in lay terms through media advertisements. The Drug Enforcement Agency would later claim that this “aggressive, excessive and inappropriate” marketing “very much exacerbated” the abuse of OxyContin. And in 2007, Purdue and three of its executives pleaded guilty to federal charges of misbranding drugs — and were forced to pay a $635 million fine (a sum far lower than $35 billion). But by then, 29,600 Americans had already died of OxyContin overdoses – and the notion that opioids were a low-risk treatment for chronic pain had become widespread.

A recent study by the Center for Economic and Policy Research found that the total cost of OxyContin abuse in the U.S. between 1998 and 2007 — as measured by spending on “abuse treatment, medical complications, productivity loss (minus mortality), and criminal justice proceedings” — totaled $38.6 billion.

In other words: The cost of incentivizing Purdue Pharma to innovate in the painkiller market can be measured in tens of thousands of American lives and tens of billions of dollars. (If the company hadn’t been granted a highly profitable patent monopoly, it likely would not have had the resources to wage the aggressive marketing campaign that helped fuel the overdose epidemic).

And that cost is ever-growing. While American doctors have soured on the medication in recent years — prescriptions for OxyContin have dropped by nearly 40 percent since 2010 — Purdue has buffered profits by enabling our country’s least responsible physicians, and aggressively marketing their wares overseas.

Last weekend, the Charleston Gazette-Mail revealed that, over a two-year period, out-of-state drug companies had shipped nearly 9 million hydrocodone pills to a single pharmacy in a West Virginia town with a population of 392 people. (It’s true that both hydrocodone and oxycodone are now available in generic form. The point here isn’t that generic painkillers haven’t contributed to the opioid epidemic, but rather, that the widespread use of opioids for the treatment of chronic pain can be traced to Purdue’s initial marketing of OxyContin for that purpose).

In the state’s Wyoming County, shipments of OxyContin doubled over that period, even as the county’s overdose death rate became the highest in America. And as the opioid epidemic grew in severity, Purdue sent fewer low-dosage OxyContin pills — and more and more high-dosage ones — a clear sign that its customers in the state were growing more addicted and dependent on the substance.

The proximate responsibility for this grotesque overprescription of opioid painkillers lies with West Virginia’s doctors. But no conscientious wholesaler could look at how many painkillers they were shipping to low-population areas of the state — and at how many people were dying from overdoses in those areas — and not realize that they were enabling a deadly epidemic.

Meanwhile, Purdue is working to export America’s opioid crisis to Europe and the developing world. All around the globe, Purdue’s international brand, Mundipharma, is working to overcome “opiophobia” — its term for foreign doctors’ mistaken belief that prescription opioids carry a high risk of abuse. According to the Los Angeles Times:

For generations, physicians have been taught that opioid painkillers are highly addictive and should be used sparingly and primarily in patients near death. Mundipharma executives and consultants call this “opiophobia” and top company officials have said publicly that success in new markets depends on defeating this mind-set.

Thus, in “Brazil, China and elsewhere,” Mundipharma is “running training seminars where doctors are urged to overcome ‘opiophobia’ and prescribe painkillers.”

At the same time, the company is spending millions encouraging potential patients to recognize their chronic pain as an illness that requires lifelong opioid use.

Seeking new patients in Spain, Mundipharma chose ambassadors guaranteed to attract attention: Naked celebrities. A string of topless actors, musicians and models looked into the camera and told fellow Spaniards to stop dismissing aches and pains as a normal part of life. “Don’t resign yourself,” Maria Reyes, a model and former Miss Spain, said in the 2014 television spot.

These tactics are nearly identical to those the company deployed in the United States in the mid-’90s. If the effects of that marketing prove identical, the results will be catastrophic; many of the developing countries that Mundipharma is targeting have far fewer resources than America does for providing drug treatment and rehabilitation.

To be sure, there is untreated pain, here and abroad, that can and should be relieved by opioid medications. Each year millions with terminal cancer and AIDS die in needless agony, according to the United Nations. Providing such people with potent painkillers is a legitimate goal for policy makers and drug companies to pursue.

But Purdue Pharma has farther-reaching ambitions. While the company does provide pain relief to the dying, its core business is the treatment of chronic pain — a focus that derives from the fact that generic morphine works pretty well for terminal patients, and the reality that it is difficult to make large sums of money off of customers who aren’t going to be around for very long.

The problem with this focus is that there’s little evidence that treating chronic pain with opioids is effective — and a lot of evidence that it’s dangerous. The Centers for Disease Control and Prevention have concluded that there is “insufficient evidence” that opioids provide effective pain relief when taken for a period of longer than three months.

The CDC has also concluded that roughly a quarter of those who use opioids on a long-term basis become addicted. But you can make a lot of money selling dope to addicts; and Mundipharma has shown little deference to the CDC’s findings.

When one fully accounts for the costs of our system of incentivizing pharmaceutical research, the virtues of simply funding that research through direct public investment become apparent. There are multiple ways we could do this. Nobel Prize–winning economist Joseph Stiglitz has suggested a prize system in which the government buys up the patents of drugs that prove themselves effective, and then allows them to be retailed as generics. Economist Dean Baker has made the case for directly financing drug research:

The United States already spends more than $30 billion a year on publicly funded biomedical research through the National Institutes of Health. If this sum was tripled, it could likely replace the funding now being supported through patent monopolies and then all new drugs could be sold at generic prices.

The fact that our elected leaders have so little interest in alternatives to our current system — despite its exorbitant costs, in both lives and dollars — suggests that America’s wealthiest drug dealers have gotten our political system hooked on their money.