Like all other president-elects in the modern era, Donald Trump has enjoyed a surge in popularity since winning the White House. But if you surge up a mile from the bottom of the deep sea, you’ll still find yourself underwater. And after securing the honor of “least popular major-party nominee in recorded history,” Trump now lays claim to the title of least popular president-elect in modern memory.

Recent polls from YouGov and Morning Consult have put Trump’s approval rating in the mid-40s. At around this point in 2008, Gallup put Obama’s favorable rating at 68 percent; that figure was 59 percent for George W. Bush in mid-December 2000, and 58 percent for Bill Clinton in November 1992.

And when voters are asked to judge Trump’s performance as president-elect, he gets even worse marks. A new Pew poll finds that only 40 percent of Americans approve of Trump’s cabinet choices, while just 41 percent approve of the job he’s done so far in detailing his policies and plans for the future. As you can see from this graphic, both those figures are historically low. 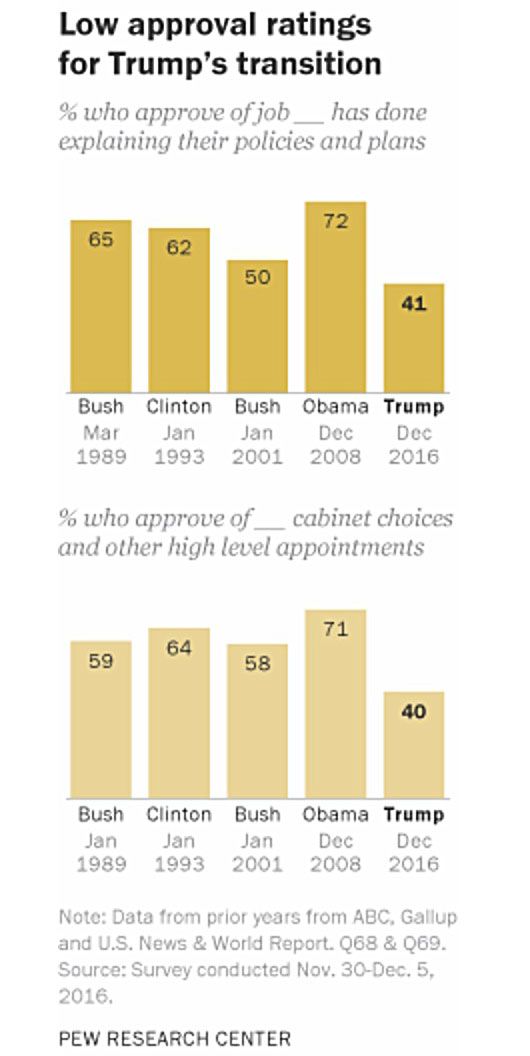 What’s more, 38 percent of Americans expect Trump to make a poor or terrible president — 3 percent more than those who believe he will be a good or great one (18 percent think he will be just average).

A majority of Americans (54 percent) also say that their president-elect has “done too little” to distance himself from “white nationalist groups.” And nearly everyone in America — Democrat or Republican — thinks Trump needs to think more before he tweets: 82 percent of the public says Trump “will need to be more cautious about the kinds of things he says and tweets” once he takes office.

Separately, Pew’s survey suggests that liberals have one thing to thank Trump for — the president-elect has dramatically raised awareness about the level of bigotry that Muslims and African-Americans face in the United States.

In 2013, 45 percent of Americans told Pew there was “a lot” of discrimination against Muslims in America, while 22 percent said the same about African-Americans — today, those figures are 57 and 41 percent respectively.

4: A growing share of Americans say blacks and Muslims face "a lot" of discrimination. Campaigns have consequences. pic.twitter.com/rz9ApCq1fn

So, a majority of America sees its president-elect as a reckless loudmouth who is soft on white nationalism, running a historically bad transition, and likely to have a presidency that’s average at best, and terrible at worst.

If only America were a democracy.