Yahoo Answers represents both the best and worst of the internet, all in one extremely and wonderfully batty site. You have obvious trolling (“Why did Americans elect a moron for president?”) next to sweet earnestness (“What kind of human shampoo can i use on my cat?”) next to hard-core racism (go find it yourself) next to complete incomprehensibility (“OK I want a frip!!!!!?”).

One problem, though, is that its front page has become, well, kinda a cesspool: 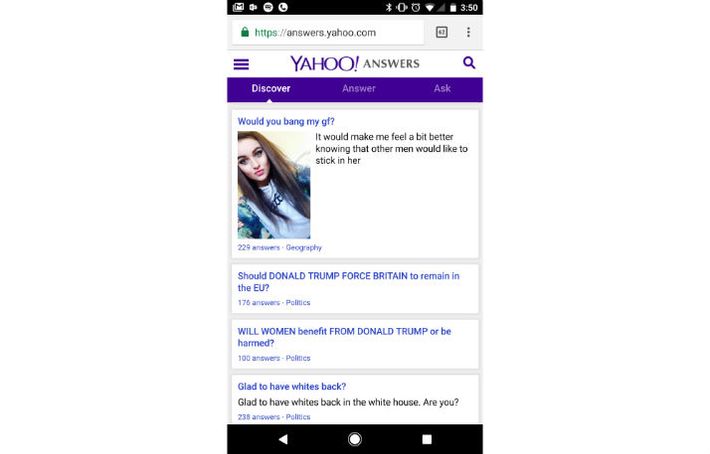 It’s not really what I want to see when I just want to kill time looking at oddball questions. Which is why I’m actually pretty into the Yahoo Answers Now app, out today for iOS and Android. The app does several things, all of which I think are improvements over the current experience you can get on either desktop or on your phone’s browser.

Which isn’t to say it’s any less crazy than plain Yahoo Answers; it’s just that crazy is less Stormfront, more surreal. For example: 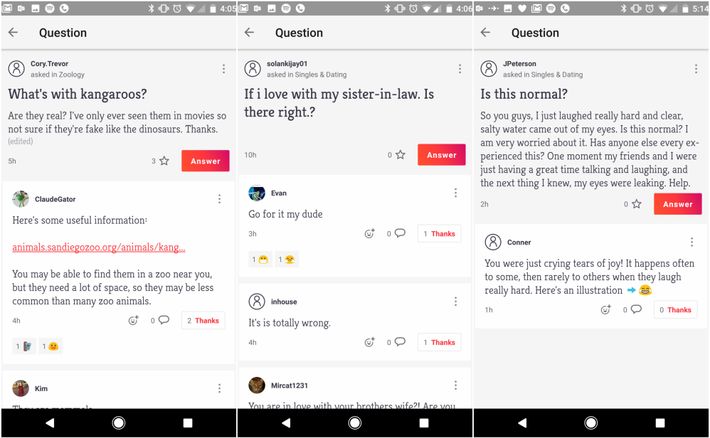 Sure, half the of the charmingly out-there questions are more subtle forms of trolling, but I’m okay with that; I’m using this as an alternative to pulling “refresh” on Twitter for the hundredth time today, not as a place to get Hard-Hitting Truths.

There are a few other ancillary benefits as well. While you do have to sign up using your phone number, you don’t give a password or need to use a Yahoo ID — somewhat comforting considering Yahoo’s shaky data security history. And, per Yahoo’s Tumblr post announcing the change, there’s apparently some algorithmic work going on to match questions asked to users who can actually answer them.

Which is all well and good, but I’m never going to ask or answer a question on the app. But what I will do is use Yahoo Answers Now as an enjoyable way of killing time waiting for a train, looking in on the concerns of random strangers. The fact that I don’t have to step over race-baiting questions or queries into whether someone is a cuck or not is just icing on the loony little cake of Yahoo Answers Now.