Donald Trump in Russia in 2013, during a trip in which he probably didn’t — but maybe, just maybe, possibly did — engage in salacious sexual acts. Photo: Epsilon/Getty Images

There’s a lot we don’t know about what went on, or is still going on, between Trump and Russia. We know that, last night, BuzzFeed published a memo containing some truly outlandish allegations, including that Trump had two prostitutes put on a “golden shower” urination show in a Moscow Ritz-Carlton, and that there has been all sorts of backdoor dealing between Trump and his people and the Russians, some of which sounds if not treasonous then at least treason-y.

We also know that that memo had been circulating around D.C. for a while, and that the allegations contained in it are being actively investigated by intelligence agencies. Those agencies agree that none of the damning specifics have been proven validated, at least not yet (that explains the hesitancy to publish it, which gave BuzzFeed the opportunity to break the ice spectacularly), but also claim that the oppo researcher who originally started putting this all together back during the GOP primary — a former British intelligence guy who may be named Christopher Steele — has had a historically good track record. On the other hand, we know that the report contains some simple errors, such as misspelling a company’s name, describing a Russian city incorrectly, and identifying the wrong “Michael Cohen” as having gone to Prague.

Other than that, there’s tons of confusion. And who better to step into a confusing situation, shouting more confusing things, than 4chan? Last night, shortly after the story broke, and as everyone on the internet was going crazy about it, rumors began to spread that the whole thing was just a chan op. Pissgate Truthers — as we’ll call them — began linking to an archived 4chan thread in which, indeed, it appears that at least one channer had been trolling Rick Wilson, a Republican operative who has been quite critical of Trump, by feeding him false information. The thinking goes that Wilson accepted the veracity of this false info, passed it onto his intel buddies, and the whole thing spiraled from there.

Quickly this rumor was picked up by individuals and outlets who couldn’t resist the idea of the media having fallen so catastrophically for such over-the-top trollery. Zero Hedge, for example, ran a piece this morning which not only leveled this accusation, but included a helpful chart explaining exactly how it all went down: 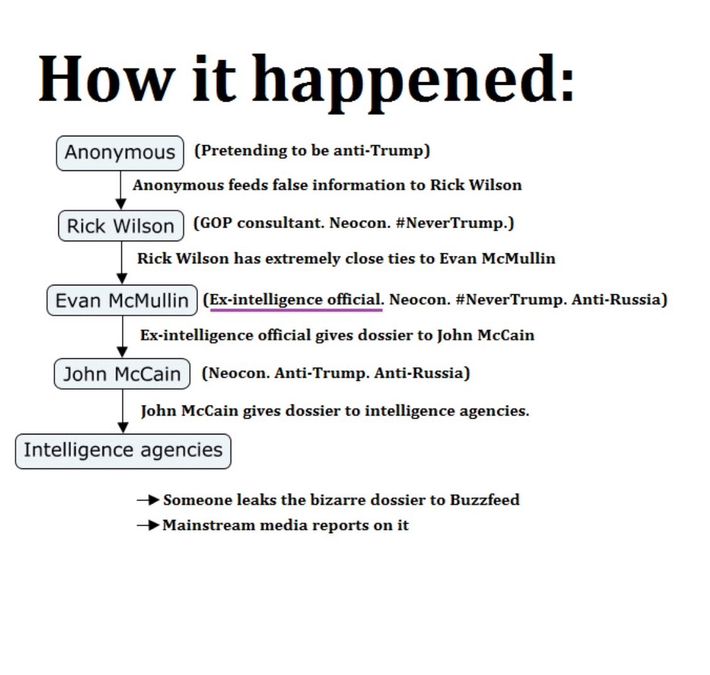 Other bits of “evidence” have emerged as well. For example, here’s an excerpt from a, uh, block of text posted on PasteBin that some are holding up as proof of 4chan’s involvement:

The remarkable thing? It’s all fake. And not only fake; it’s a prank perpetuated by 4chan, on Rick Wilson himself. A post on 4chan on october 26 stated “mfw managed to convince CTR and certain (((journalists))) on Twitter there’ll be an October surprise on Trump this Friday” along with a picture of a smug face with a hash name.

http://archive.4plebs.org/pol/thread/94704894/#94705224 || on november 1, a person without a picture but is assumed to be the same person posted “So they took what I told Rick Wilson and added a Russian spy angle to it. They still believe it. Guys, they’re truly fucking desperate - there’s no remaining Trump scandal that’s credible.”

In addition, last night or early today, a Twitter user who goes by the handle @trsprudence began claiming, in a series of tweets that gained some traction, that he (let’s go ahead and assume it was a he) was the guy who had launched the whole thing — that he’d fed it all to Wilson. Since then, though, his account has been deleted (hmmmm), though Zero Hedge has screengrabs here and here.

Trolling someone like Rick Wilson is exactly the sort of thing 4chan would do. The image board does love to carve out a niche in public discussions and debates, and has been quite successful at doing so. But getting from Someone on 4chan sent stuff to Rick Wilson to 4chan fabricated the entire contents of an oppo dossier that multiple outlets have reported was created by a real-life person with a spy background, and which the intel community is taking seriously requires a perhaps unattainable quantity of meme magic. So this is, in all likelihood, false. That said, it’s fun to watch the channers, who revel in a culture of anonymous fakery, insist that this time they should be taken seriously.

Despite how much of a stretch this rumor is, in all likelihood a lot of people probably believe it. That’s in large part because the internet is rife with bad actors who will spread anything that is salacious without checking it (an ironic problem to mention in this particular instance). Naturally, there was a Gateway Pundit post pinning the whole thing on 4chan last night. Naturally, Mike Cernovich, both tweeted and Periscoped about the rumor, spreading it further. “Right now it is looking like 4chan hoaxed the fake news media,” he opined in his video, allowing that “right now I don’t know for sure.” But probably!

Hahahahaha! Holy fucking shit! The big anti Trump story may have originated at 4Chan as a hoax. https://t.co/YQq7AI47rv

Was that Buzzfeed Trump report a 4Chan hoax? Tipster says it was! pic.twitter.com/4a33tx5mN0

Anytime an attention-getting news story breaks, the fake takes follow seemingly moments later, with the same handful of usual suspects, it feels, helping spread them every time. That’s just how things work now, and it makes for a weird, foggy information environment.