Behind every great man stands a team of PR professionals to make sure he stays great. Photo-Illustration: David Ramos/Getty Images

There’s a certain tone to Mark Zuckerberg’s Facebook (unblockable!) posts, a kind of “aw shucks” white-bread earnestness — not unpleasant, not offensive, just friendly and happy to be here.

Look, Zuck runs the world’s largest social network, so he can’t just issue a boilerplate PR press release for the hoi polloi, like the CEO of an oil company or auto manufacturer, and be done with it — he has to connect, to show the power of Facebook’s platform to allow people to share moments from their lives. That means charming anecdotes about his dog alongside announcements about new charity initiatives. The means s 360° video of his child’s first steps. The means bland platitudes about personal plans to read more books or run a mile a day. That means warm, inviting photography. And it means a team of at least a dozen people helping run his Facebook page. 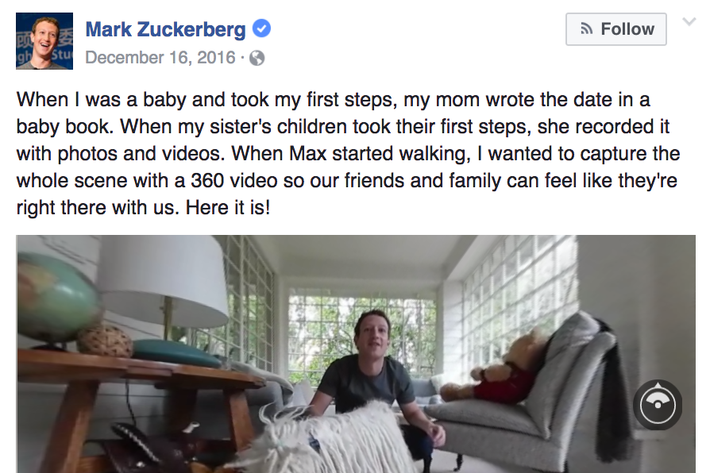 As Bloomberg reports, Zuck doesn’t do this on his own. He has a whole team of at least 12 people who help write his posts for him, shoot those beautiful candid photographs he posts — including Washington Post stringer Charles Ommanney — and moderate his comments to keep the incredibly racist and vile stuff off Zuck’s page.

None of this should be any surprise. Most major social-media presences are managed by a team of people, and why should Zuck be any different? And Zuck seems to realize he still has some serious image rehab to do after years of being painted as a cold, socially awkward boy genius. As court documents show, Zuck unfiltered was an odd and aggressive creature (though, granted, he was much, much younger when typing those IMs than he is today — and God forbid we all be judged on what we type into ostensibly secret chat windows). And Jesse Eisenberg’s alternatively insecure and ruthless portrayal of Zuckerberg in 2010’s The Social Network probably did him no favors ether.

So one of his Zuck’s strategic goals, both for himself and for Facebook, has to been to turn “Mark Zuckerberg, billionaire tech weirdo” into “Mark Zuckerberg, goofy nerd who cares about the world’s problem’s, especially yours.” This is especially true because, with Steve Jobs gone, there simply is no other tech company than Facebook that is so thoroughly seen through the lens of its CEO. A strange and creepy Zuck translates into a strange and creepy social network. A happy-go-lucky Zuck that goes on safaris, builds his own personal home-AI, and loves to play with his dog translates into a social network meant for moments from your personal life, both big and small.

The latest manifestation of this? A series of posts from Texas, which Zuckerberg is posting as if it’s part of his 2017 promise to visit all 50 states of the United States this year. 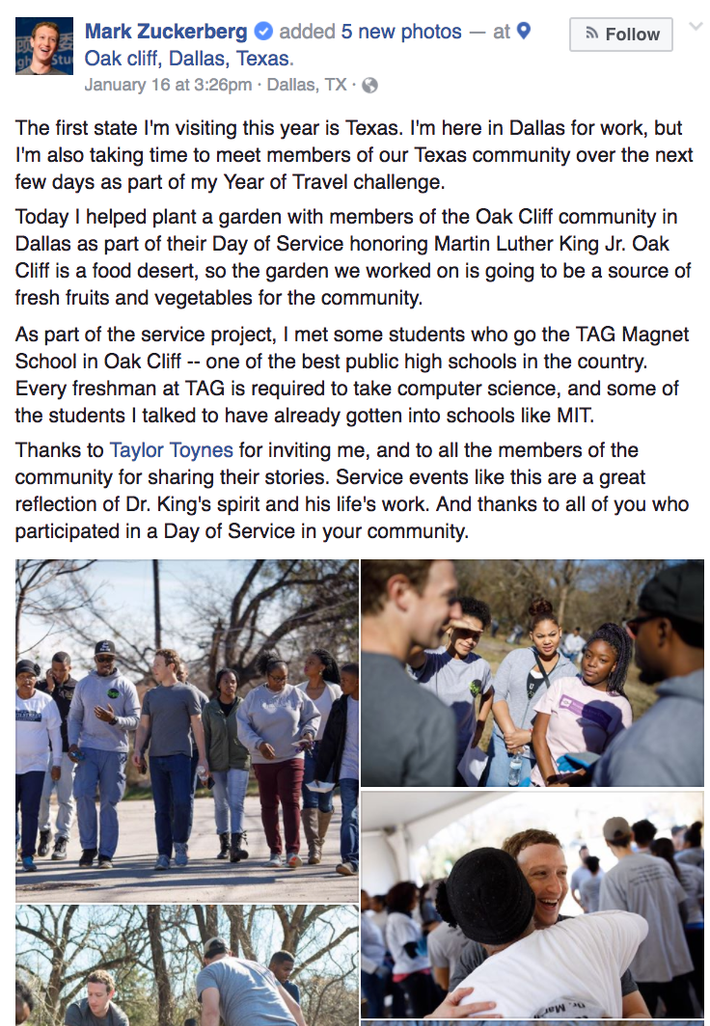 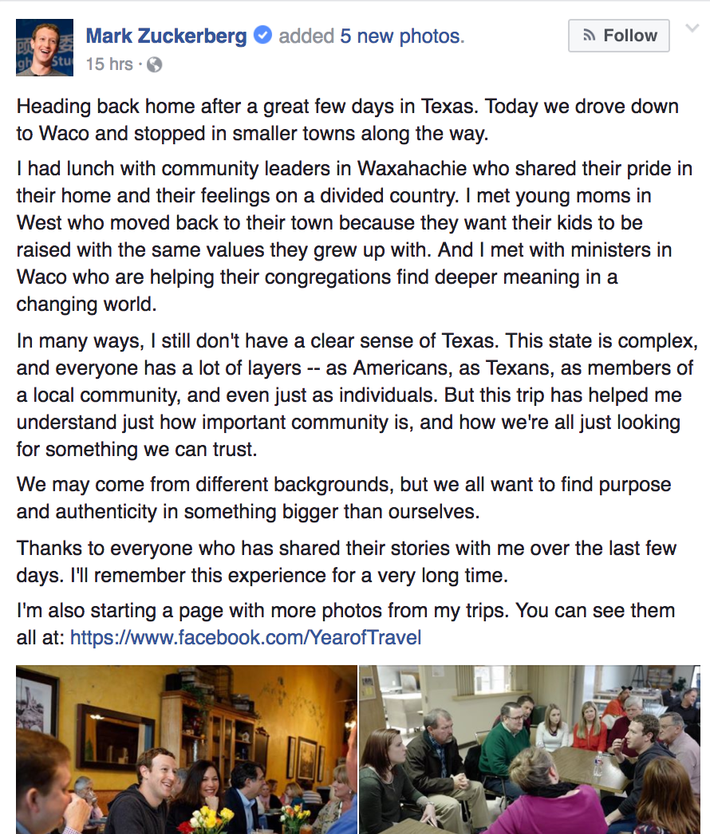 There’s Zuck taking part in a cultural tradition outside his own Northeastern upbringing: 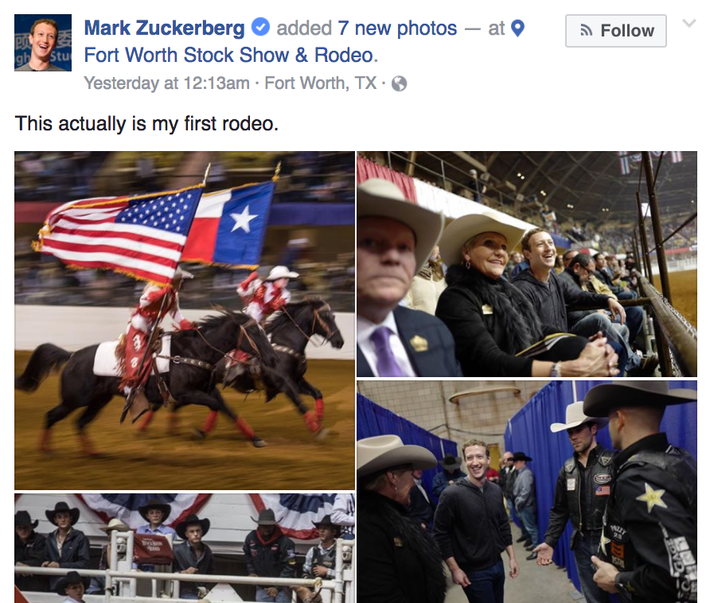 And there’s Zuck doing the classic factory tour, in case a data center for Facebook:

Plenty of people have pointed out these posts — and Zuck’s overall plan to visit all 50 states in 2017 — feel an awful lot like what someone would do if they were getting ready to run for political office. And it was recently revealed Zuckerberg asked for — and got — permission to serve for two years in government without relinquishing control of Facebook.

But maybe you don’t need to see political machinations at play here. Two years isn’t a long time to serve in government. At most Zuckerberg could serve one term in the House of Representatives if elected (or serve in an another position if appointed by a president, which seems unlikely under Trump). Maybe all these rodeos and community gardens and local diner sit-downs are just Zuckerberg and his team’s awkward attempt to make him seem like exactly what he is not — just another average Facebook user.

THE FEED
21 mins ago
the national interest
the national interest
Trump Brought Nazis Into the GOP. DeSantis Won’t Expel Them.
By Jonathan Chait
White nationalism is not just a Trump problem.
10:25 a.m.
the money game
the money game
13 More Disturbing Revelations About Sam Bankman-Fried
By Kevin T. Dugan and Matt Stieb
It’s been weeks since the dramatic crumbling of his crypto empire, and we’re still learning about the mess left behind by Bankman-Fried.
8:00 a.m.
social studies
social studies
Do You Have a Right Not to Be Lied To?
By Jeff Wise
Freedom of speech is being reconsidered by a group of legal scholars, who argue it is not absolute and may be outdated in a world of disinformation.