Unlimited data plans, like MySpace, good Judd Apatow movies, and a booming housing market, were a defining feature of the mid-’00s. Before the iPhone, most telecoms saw no reason to restrict the amount of data you could download. How many emails could you really download to your BlackBerry or Treo?

And during the early days of the smartphone revolution, when a free iPhone was the carrot to get you to sign a two-year contract, unlimited data was almost always part of that deal. Indeed, many plans in the aughts still hinged not on how much data you could download, but on how many voice minutes you got or how many text messages you could send.

By the turn of the decade, as the number of voice calls plunged and data usage surged, telecom companies began to realize the mistake they had made. AT&T announced in mid-2010 they would be eliminating their unlimited-data plan for new customers, “grandfathering” in any customers that were already on such a plan. Verizon did the same in 2011, again allowing unlimited-data customers to continue on their plans, but not offering new customers the option of unlimited data.

The next five years was a period of tiered data plans, usually enforced by either hard throttling or large overage charges if you went over your data limit. Throttling was annoying; overage charges could be disastrous for someone who forget to switch over to their Wi-Fi network when they got home.

But during the past five years, people have only been using more and more data. When AT&T announced it was discontinuing its unlimited plan in 2010, the telecom company said the average user was downloading about 200 MB per month. By 2015, Swedish telecom giant Ericsson estimated the average North American smartphone owner used about 5.1 GB of data per month — and forecasts that by 2022, smartphone users will use 22 GB per month. North Americans’ total overall data usage was nearly doubling every year — here’s how much total data in petabytes North Americans were using on their smartphones, for every year since 2010. 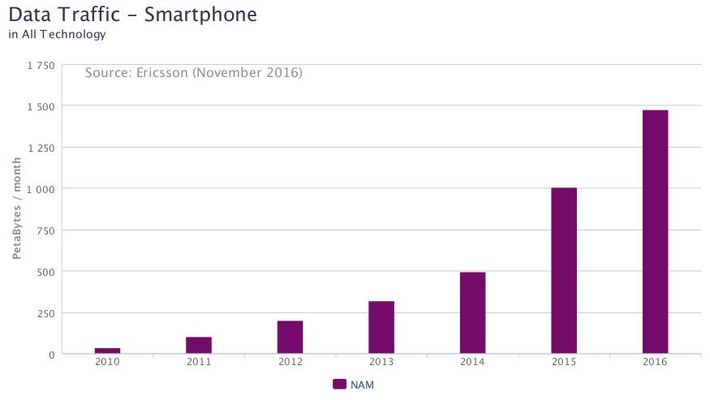 In other words, at the same time that everyone suddenly was using a lot more data, data was becoming a more complicated thing to buy. Tiered data plans made life a pain, forcing customers to be cautious about streaming a video and audio in the wild, lest they blow through their data cap. And the idea of commoditized mobile data, paid for like a gallon of milk or metered out like electricity, grated on many users who first started using smartphones during the days of unlimited data.

T-Mobile already did mobile customers a great service several years ago, when it forced every other telecom to kill off the onerous two-year contract (even if it meant that those “free” upgrades and phones also went away). Now, it’s once again forcing change in the industry, killing off every single one of its cell-phone plans except for an “Unlimited” package for $60 a month. While not every carrier is following suit, they’re all making progress toward something slightly less antagonistic toward their customers.

Much like Sprint’s own unlimited package, T-Mobile’s unlimited plan isn’t truly unlimited. Both start throttling that data if you go over certain data limits — 28 GB per month in T-Mobile’s case, 23 GB per month in Sprint’s case. For those that live with smaller data caps, that may seem like a lot. For someone expecting to be able to use their phone’s data plan as much as they want, that’s streaming four or five HD Netflix movies.

Meanwhile, Sprint, Verizon, and AT&T are at least getting better about those overage charges. All are now offering plans that will start throttling users down to 2G speeds once you go past your data cap — instead of slapping on an overage charge because you went 500 KB over your limit for the month. It’s not perfect, and Verizon and AT&T’s data plans can still be confounding, especially when trying to figure out a multi-phone family package — but it’s better than it was even a year ago.

But what about those lucky few souls still grandfathered in on Verizon and AT&T’s old-school unlimited plans? They’re getting the squeeze. AT&T has slowly been raising the price of their unlimited data service — it used to be $30 per month just for data, and now is at $45 — usually bringing your total bill somewhere in the range of $90 per month. There’s also throttling involved — go beyond 22 GB a month and your unlimited plan will suddenly slow down. And if you try to use your unlimited data plan to tether your phone to your laptop to get work done on the road, AT&T will simply boot you from the service.

Meanwhile, Verizon users that were grandfathered into unlimited data only pay $45 per month — with an important caveat. The company announced on Wednesday that it will automatically switch any consumers that use more than 200 GBs of data per month over to a tiered plan. Now, it’s very fair to point out that you’d have to really burn through your data plan to break that 200 GB cap. Per Netflix, you’d need to stream about 285 hours of SD video or 67 hours of HD video in order hit that number. But let’s say you really do use all that data — 67 hours of HD video is easily doable if you’re watching one HD movie per night and maybe bingeing a show or two on weekends. And if you do blow past that 200 GB cap, the closest thing Verizon will offer after it kicks you from the unlimited service is its 100 GB per month plan — which starts at $450 per month.

Telecoms say there’s a valid reason why people shouldn’t get unlimited data. If you’ve ever tried to use your phone at an extremely crowded event or concert and found yourself unable to check your map directions or send an SMS, you’ve dealt with a congested data network. Even more so than local wired ISP networks (which can get congested during heavy usage times, like Sunday evenings), wireless data networks suffer from too many users — especially heavy users — all attempting to ping the same cell tower. But if you paid for an unlimited data connection in 2010, it still seems fair to say that a company should honor that agreement. My guess? Within the next year or two, Verizon and AT&T will simply cancel out all the grandfathered unlimited data plans, period, perhaps offering discounted plans in return, or “unlimited” plans that throttle.

So what if you truly want unlimited internet? You can do what I did. Donate $500 to the Calyx Institute and get a free Netgear mobile hotspot that piggybacks off Sprint’s LTE network and gets you unlimited data for as long as you’d like, with no monthly charges and no throttling. (It’ll cost you $300 to sign up for another year of service after year one.) Amortized out over 12 months, that’s just under $42 a month for unlimited data at $500 a year, or $25 a month at $300 a year. Combine that with a cheap MVNO plan like Project Fi or Republic Wireless for voice and text, and it’s still possible to get unlimited data at reasonable rates — but you’re going to have to go outside the major carriers to do it.

3:47 p.m.
politics
politics
Cuomo’s War on Tish James Continues
By Nia Prater
The ex-governor’s attorney reemerged to “correct” the attorney general’s damning report.
2:13 p.m.
the national interest
the national interest
Hoping Republicans Extend Your Social Agenda Is Not a Plan
By Jonathan Chait
The perils of Biden’s short-term program strategy.
12:19 p.m.
vision 2020
vision 2020
2020 Was a Victory That Quietly Crushed Democrats’ Hopes
By Ed Kilgore
Winning the White House and Congress was obviously better than losing, but many current Democratic struggles are rooted in 2020 underperformance.
9:45 a.m.
covid-19
covid-19
NYC to Mandate Vaccination for All Public Workers
By Benjamin Hart
The city’s biggest police union has already promised legal action.
7:00 a.m.
iraq war
iraq war
Colin Powell Doesn’t Need You to Defend Him
By Zak Cheney-Rice
The former secretary of State was perfectly comfortable with his bloody legacy.
10/19/2021
politics
politics
FBI Raids Homes of Russian Oligarch Oleg Deripaska
By Matt Stieb
The searches in D.C. and New York are reportedly related to potential violations of sanctions against the billionaire with ties to Paul Manafort.
10/19/2021
international affairs
international affairs
Haitian Kidnappers Demand $17 Million for Return of American Missionaries
By Chas Danner
What we know about the unfolding situation.
10/19/2021
politics
politics
GOP Congressman Predicted Feds Would Indict Him in Bizarre Video
By Matt Stieb
Jeff Fortenberry allegedly misled federal investigators about $30,000 funneled to him in 2016 by a Nigerian billionaire.
10/19/2021
politics
politics
Never Trump ‘Red Dogs,’ Democrats’ Litmus Tests Are Not About You
By Ed Kilgore
Democrats spent years achieving a progressive consensus and are far from total unity. But they can’t turn back the clock to please ex-Republicans.
10/19/2021
sports
sports
Move Over, Kyrie, It’s Ben Simmons Drama Time
By Nia Prater
After Simmons was suspended for a game, his teammate Joel Embiid said, “At the end of the day, our job is not to babysit somebody.”
10/19/2021
impossible dreams
impossible dreams
Brave de Blasio Eyes Governorship Despite Incredible Unpopularity
By Benjamin Hart
When you’re less liked than Trump, the natural next step is to seek even higher office.
10/19/2021
explainer
explainer
What Is Congress Even Doing Right Now? A Brief Guide.
By Ed Kilgore
Congress is tangled in interlocking bills and delayed crises. Here’s the real status and deadline on infrastructure, reconciliation, and the rest.
10/19/2021

There he goes again

Manchin: “a carbon tax is not on the board right now”
—@burgessev

10/18/2021
Just How Disastrous Is Manchin’s Climate Obstruction?
By Benjamin Hart and David Wallace-Wells
10/19/2021
the national interest
the national interest
Conservatives Are Starting to Say Covid Is a Positive Good
By Jonathan Chait
The creepy final stage of denial.
10/19/2021
games
games
The NBA Would Like You to Stop Talking About Kyrie Irving
By Will Leitch
The league is now a culture-war lightning rod, even as its on-court product dazzles.
10/19/2021
the inside game
the inside game
Virginia’s Election Is Breaking the Rules
By Gabriel Debenedetti
Democrats nationalize the governor’s race despite the mess in Biden’s Washington.
10/18/2021
sports
sports
NHL Player Suspended 21 Games After Forging Vaccination Card
By Matt Stieb
Evander Kane will forfeit almost $2 million and miss around a quarter of the season after the league found that he submitted a fake vaccination card.
10/18/2021
politics
politics
Democratic Boss Uses David Duke in Analogy About India Walton
By Nia Prater
Jay Jacobs was asked about whether he must endorse Buffalo’s socialist candidate for mayor who won the primary.
10/18/2021
2022 midterms
2022 midterms
Are Fears of 2022 Losses Driving House Democrats to Retire?
By Ed Kilgore
Sometimes senior House members bail in anticipation of their party losing the majority. A wave of 2022 retirements could be a bad sign for Democrats.
10/18/2021
build back better
build back better
Manchin Hasn’t Killed Biden’s Climate Agenda (Yet)
By Eric Levitz
Biden’s best green policy looks dead. But there’s still a fair amount Congress can do.
10/18/2021
intelligencer chats
intelligencer chats
Just How Disastrous Is Manchin’s Climate Obstruction?
By Benjamin Hart and David Wallace-Wells
U.S. credibility is on the line, not to mention the fate of the planet.
10/18/2021
politics
politics
Is It Time for Democrats to Panic About Virginia — and the Midterms?
By Ed Kilgore
Here’s some reassurance even for Democrats who are worried Glenn Youngkin’s defeat of Terry McAuliffe for governor would foretell a 2022 disaster.
10/18/2021
politics
politics
Whistleblower Cop Says Eric Adams’s Sexist Smear Job Ruined Her Life
By Nia Prater
He accused a female officer who exposed a dirty cop of doing it because she was a scorned lover, and showed a photo of her in a bikini.