Kellyanne Conway, counselor to the president and Ivanka endorser.

President Trump has been obliterating existing norms about using his office for personal enrichment. “Norms” is the key word — federal law strictly regulates conflicts of interest of every federal employee except the president, who is assumed (or was assumed, before Trump came along) to refrain from using his office for personal gain. In their few weeks in office, Trump’s staff have apparently gotten comfortable enough with the arrangement that they are now routinely blending their roles as spokespeople for Trump the president and Trump the brand. Kellyanne Conway used an interview from the White House this morning to officially endorse the Ivanka Trump product line.

This appears to be completely illegal. Federal law is pretty clear about this: 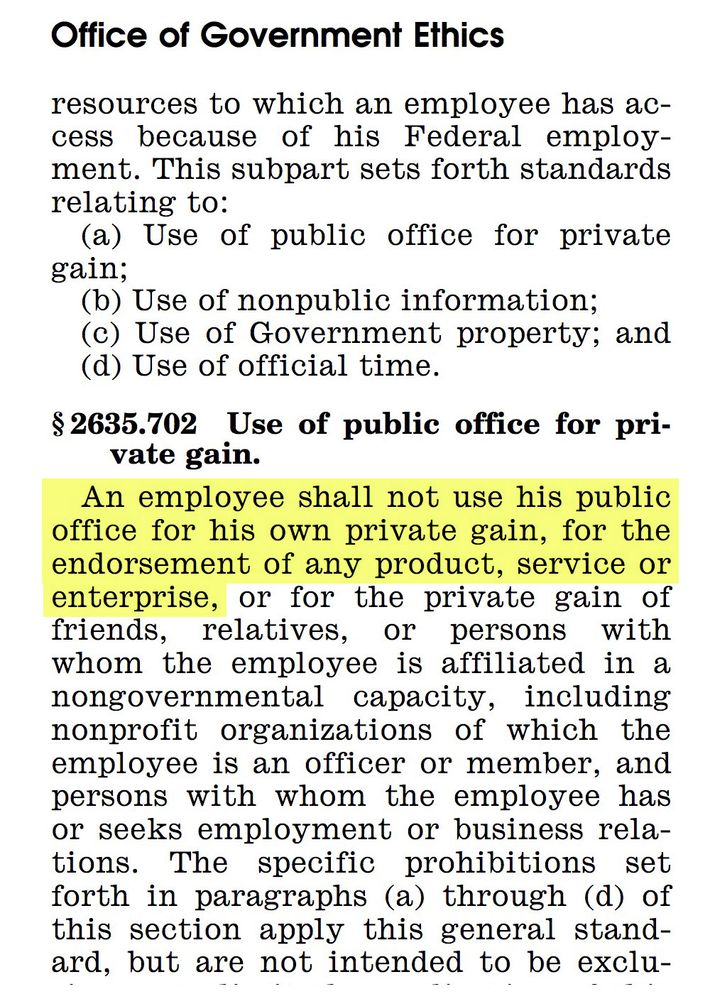 Kellyanne Conway is a federal employee. A federal employee may not “use his public office for his own private gain [or] for the endorsement of any product, service or enterprise.” And this was definitely an endorsement. Conway said, “This is just wonderful line. I own some of it. I fully — I’m going to give a free commercial here. Go buy it today, everybody. You can find it online.”

Conway has gotten used to channeling Trump’s beliefs and advocating his interests. But she seems to have forgotten that a legal loophole allows him to engage in wildly kleptocratic behavior without any legal consequences, but if she does the same it’s not merely unethical but actually illegal.

Update: The Washington Post adds more reporting, confirming that Conway appears to have clearly violated federal ethics laws. While the violation seems undisputable, enforcement is typically handled by the employee’s federal agency: “Enforcement measures are largely left to the head of the federal agency — in Conway’s case, the White House,” reports the Post, “One lawyer said a typical executive-branch employee who violated the rule could face significant disciplinary action, including a multi-day suspension and loss of pay.”

THE FEED
6:00 a.m.
vision 2024
vision 2024
Democrats Quietly Search for an Alternative to Biden in 2024
By Gabriel Debenedetti
Inside the 2024 soul-searching that’s happening in every corner of the Democratic Party — except the White House.
5/23/2022
new york
new york
Sean Patrick Maloney Is Getting Primaried After Ticking Off Democrats
By Matt Stieb
Progressive state senator Alessandra Biaggi is expected to challenge Maloney after he ditched his own seat to run in a less competitive district.
5/23/2022
politics
politics
House Ethics Committee Investigates Madison Cawthorn for Promoting Crypto
By Matt Stieb
Cawthorn is leaving in January, but he may be in trouble before then.

5/23/2022
life after roe
life after roe
Nancy Pelosi Communion Ban Is a Challenge to Pope Francis
By Ed Kilgore
The Vatican opposes the weaponization of Communion and stopped bishops from barring President Biden. Will Francis intervene on Pelosi’s behalf?
5/23/2022
just checking in
just checking in
So What Is Rudy Giuliani Up to These Days?
By Margaret Hartmann
Trump’s former attorney has been keeping busy by dealing with January 6–related legal woes, making weird videos, and arguing with parade hecklers.
5/23/2022
plagued
plagued
The COVID Vaccine News Many Parents Have Been Waiting For
By Matt Stieb
Pfizer has finally filed for FDA approval for a three-dose COVID vaccine for kids under the age of 5.
5/23/2022
foreign interests
foreign interests
Biden Says U.S. Will Defend Taiwan Against China — or Maybe Not
By Chas Danner
The president’s comment indicated an aggressive change in policy. The White House quickly walked it back.
5/23/2022
religion
religion
Southern Baptists Hit by Bombshell Report on Sexual Abuse
By Ed Kilgore
The ever more conservative leadership of America’s largest Protestant denomination gets a wake-up call about its own sins.
5/23/2022
the city politic
the city politic
Maybe Bill de Blasio Deserves a Comeback
By Ross Barkan
The former mayor stooping to run for Congress is absurd, but a little less so when considering his record.
5/23/2022
early and often
early and often
The Drama-Lover’s Guide to the New Trump Books
By Margaret Hartmann
Love gossip, but not enough to actually read the new batch of Trump books? Here are all the juicy, disturbing, and darkly amusing tidbits you missed.
5/23/2022
the money game
the money game
Buy Now. Pay (and Pay, and Pay, and Pay) Later.
By Scott Galloway
The bill for the finance hack of the pandemic is coming due — for all of us.
5/22/2022

Federal appeals court says undated Pa. mail ballots should be counted, a decision that breaks with state courts and could have immediate impact
—The Philadelphia Inquirer
5/21/2022
early and often
early and often
Trump Faces Another Round of Humiliation in Georgia
By Ed Kilgore
Trump hoped to get his revenge in Tuesday’s primary. Instead, his pick for governor, David Perdue, is sure to lose, and his other prospects look iffy.
5/20/2022
early and often
early and often
Trump Is Upset That Android Hasn’t Approved His Nonexistent App
By Margaret Hartmann
He’s wondered, “Is Google trying to f- - - me?” Maybe, but the more immediate issue is his own company hasn’t submitted an app for Android.
5/20/2022
the bottom line
the bottom line
Nationalize Baby Formula
By Ross Barkan
And other ideas to end the corporate stranglehold over mothers and children.
5/20/2022
money
money
Black Lives Matter’s National Organization Opens Its Books
By Sean Campbell
What do they reveal?
5/20/2022
the disinformation war
the disinformation war
The Liberal Obsession With ‘Disinformation’ Is Not Helping
By Sam Adler-Bell
Why the swift death of the White House’s disinformation board is probably a good thing.
5/20/2022
the money game
the money game
Money-Losing Season Is Here
By Kevin T. Dugan
It’s been a dismal year for everything from 401(k)s to cash savings to crypto. Expect more pain.
5/19/2022
life after roe
life after roe
Oklahoma Outdoes Itself in Race to Wipe Out Abortion Rights
By Ed Kilgore
This heavily Republican state offers an unsettling glimpse at what politics will be like in a post-Roe America.
5/19/2022
early and often
early and often
Tucker Carlson Used to Like Hunter Biden’s Nepotism
By Matt Stieb
Verified emails show that the Fox News host, who’s gone after Hunter for trading on his last name, asked him to write a recommendation for his son.
5/19/2022
politics
politics
A Lot of Democrats Are Mad at Sean Patrick Maloney
By Nia Prater
His decision to challenge a fellow incumbent Democrat is rubbing many colleagues the wrong way.
5/19/2022
early and often
early and often
AOC’s New Fiancé Is Charmingly Normal
By Josh Gondelman
Riley Roberts seems supportive, unpretentious, and comfortable with being invisible.
5/19/2022
early and often
early and often
How Doug Mastriano’s Primary Victory Threatens the 2024 Election
By Ed Kilgore
The GOP gubernatorial nominee in Pennsylvania backed Trump’s failed election coup in 2020 and could be well positioned to help him succeed next time.