This morning, McDonald’s, or at least whoever controls the company’s Twitter account, shared some polarizing opinions about POTUS 44 and POTUS 45. In a now-deleted missive, the company tweeted at Donald Trump’s personal account, @RealDonaldTrump, calling him a “disgusting excuse of a President” and mocking his “tiny hands.” The tweet also said “we [McDonald’s] would love to have @BarackObama back.” The tweet wasn’t live for more than 20 minutes before, unsurprisingly, it was deleted. But receipts live forever, and we have them. 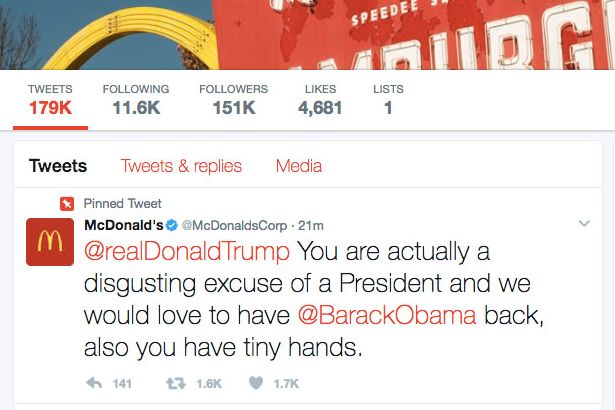 It’s unclear if the McDonald’s account was hacked, or if someone with the company’s Twitter password just decided to go rogue on this cold March morning. Given how quickly the tweet was removed, the latter seems more likely. Especially since the tweet was pinned to the top of the account until it was deleted. Select All has reached out to McDonald’s and will update this post if we hear back. In the meanwhile, enjoy the memory of this short-lived, dramatic tweet. I know I’m lovin’ it.

Update 10:41 a.m.: McDonald’s responded via Twitter, saying its account had been compromised and that the company is investigating.