Obama’s economy was not enough to save Hillary Clinton. Photo: Joe Raedle/Getty Images

The liberal explanation for the result of the election emphasizes Hillary Clinton’s deep personal unpopularity, which grew out of a combination of her own bad decisions, hostile media coverage, an overblown email scandal, and the decisive intervention of FBI director James Comey. Both the right and the far left have drawn different conclusions, which use Clinton’s defeat as an indictment of the entire liberal policy agenda. David Brady, a political scientist at the conservative Hoover Institute, tells Tom Edsall, “Why did Kankakee, Illinois, and Green Bay vote Obama and then Trump? They didn’t become racist and misogynistic over the last 8 years. It has to do with the effects of slow-growth economies over time on people’s psyches.”

The left-wing writer Matt Stoller has made the same point repeatedly. “Obama can’t place the blame for Clinton’s poor performance purely on her campaign. On the contrary, the past eight years of policy-making have damaged Democrats at all levels,” he wrote in January. Trump is “the price we’ll be paying for more than 25 years of failed Democratic policy-making,” he writes this month.

The argument boils down Clinton’s election to a simple causal chain. Obama’s policies led to slow economic growth, which led to voter anger or disillusionment with Obama’s presidency, which voters transferred by proxy onto his successor candidate, Hillary Clinton. This line of reasoning has come to appear so self-evidently true that many analysts on the right and the left have discussed the election as though Trump defeated Obama, with Clinton’s role almost incidental. Many of them assert that those of us who don’t share this belief are in a bubble of elitist denial, failing to grasp the popular discontent with Obama’s status quo.

The supposition that Clinton lost because of her association with Obama, rather than despite it, ignores a great deal of publicly available data about both figures. At election time, Obama was quite popular, and Clinton quite unpopular. While Clinton was less unpopular than her opponent through most of the campaign, one recent analysis shows that the floor dropped beneath her support after the Comey letter came out: 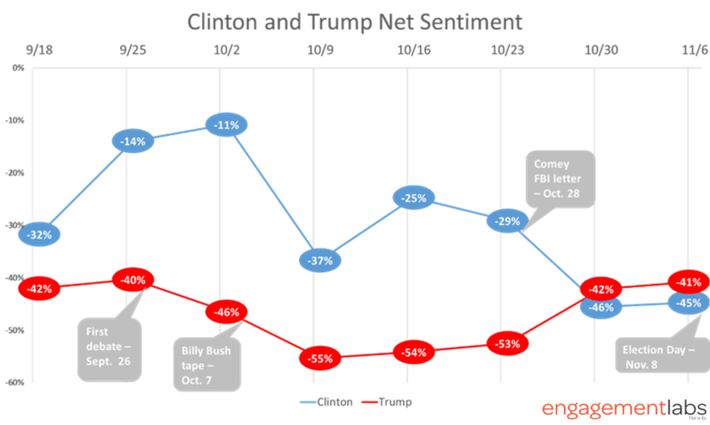 If there was a bubble, it was political insiders who saw Clinton’s email issue as a small-bore routine problem, not the image-defining scandal most Americans came to see it as. I know several Democratic political operatives who heard from swing voters who believe Clinton routinely had people murdered. Insiders never saw how badly the email issue poisoned her image, holding queasy Republicans in Trump’s corner and depressing her turnout.

The theory that Obama’s economic policies hurt Clinton also has trouble explaining why Obama was able to win comfortably in 2012. After all, the economy was in worse shape in 2012 than in 2016, and Obama’s approval was higher. So why did economic discontent with Obama hurt Democrats more in 2016 than in 2012?

Indeed, the more we learn about the economy, the harder it gets to sustain the theory that Obama’s economy hurt Clinton. Economic data arrives in lags, and is often revised years later before a truly accurate picture forms. Many of the indictments of Obama’s economy rely on old data that does not capture his entire presidency. This turns out to be especially significant. Financial crises tend to produce slow recoveries. The elevated unemployment caused by the worldwide collapse of the financial system took about half a dozen years to come down. During that time, a glut of workers led to stagnant wages. Many of the indictments of the economy during this period reflect data collected in 2013 or 2014. Bernie Sanders repeatedly insisted on the campaign that some huge percentage of wage growth was accruing to the richest 1 percent, which was accurate in the early, slow-growth years of the recovery, but was no longer true at the time he said it.

Since 2015, low unemployment has had the predictable effect of forcing employers to offer better wages to attract and keep their labor force. While incomplete, the data so far suggests wages up and down the income ladder have grown smartly for two years. In 2015, wages actually grew more rapidly at the bottom of the income ladder than at the top: 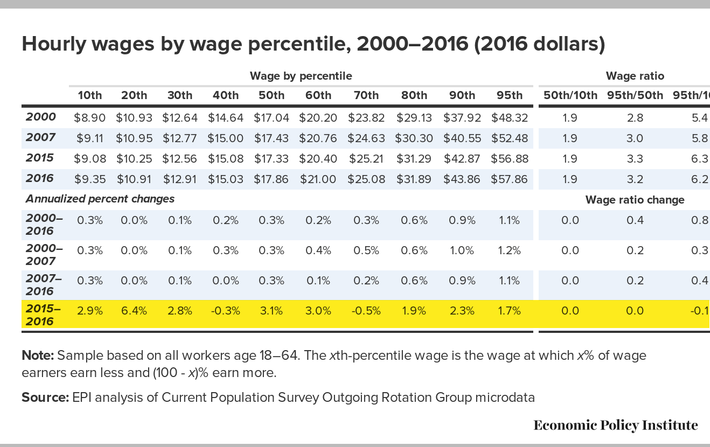 Growth of jobs and wages continued through 2016 and into 2017, and income trends are likely to show that last year extended the same broad-based growth dynamic as the year before. The slow recovery from the financial crisis eventually yielded an impressive, still-ongoing recovery that is producing broad-based increases in the standard of living.

Many of the indictments of Obama’s policies were formed early in his administration. (Stoller, among others, has been making this critique since Obama’s first term.) There is a case to be made that the fiscal response to the recession was too small, unnecessarily elongating the recovery. That said, the economy under Obama did reach low unemployment and it has, at last, produced impressive wage gains for the working class. If any number of factors had turned out differently, from Comey to WikiLeaks, people would be talking about the Obama-Clinton boom. The evaluations of his economic record that are able to account for all the data will yield conclusions far more favorable than most people afforded Obama at the time. In the meantime, the political credit will accrue to the president who inherited an economy humming along at low unemployment.

THE FEED
8:00 a.m.
gun violence
gun violence
The Mass Shooter’s Other Tool
By Matt Stieb
Legal to buy online in 49 states, body armor is becoming more common in mass shootings — and making them more lethal.
5/28/2022
what we know
what we know
Texas Officials Acknowledge Botched Police Response to School Shooting
By Intelligencer Staff
The local police chief in charge delayed confronting the gunman — while kids trapped inside the classroom repeatedly called 911 asking for help.
5/28/2022
the city politic
the city politic
Is New York Ready for Recession?
By Errol Louis
The economic warning lights are flashing red.

5/28/2022
texas school shooting
texas school shooting
Will the ‘School-Shooting Generation’ Change Politics?
By Ed Kilgore
Congress failed to act after Sandy Hook, and it feels just as paralyzed on gun violence today. But there are reasons for renewed hope.
5/28/2022
texas school shooting
texas school shooting
For Trump and Other NRA Speakers, the Answer to Uvalde Was More Guns
By Ben Jacobs
The horror of Tuesday’s school shooting in Texas left an impression at the NRA’s annual conference, but it didn’t make a difference.
5/27/2022
student loans
student loans
Biden Searches for the Political Sweet Spot on Student-Loan Debt Relief
By Ed Kilgore
His long-overdue promises to provide loan forgiveness are colliding with fiscal realities and differences of opinion between generations.
5/27/2022
early and often
early and often
Will Trump Ruin Georgia Republicans Out of Spite?
By Ed Kilgore
Trump really dislikes Governor Brian Kemp, who thwarted his primary purge attempt. But Georgia Republicans want a united front against Stacey Abrams.
5/27/2022
the national interest
the national interest
Republicans Block Bill to Monitor Their Violent Allies
By Jonathan Chait
“Domestic extremists — hey, that’s us!”
5/27/2022
just asking questions
just asking questions
A Different Way to Prevent Mass Shootings
By Benjamin Hart
Talking with Mark Follman, whose new book explores how behavioral threat assessment could help a country paralyzed by gun violence.
5/26/2022
early and often
early and often
Is Trump Really a Republican Kingmaker?
By Ed Kilgore
The former president is still touting his highly inflated endorsement record, but his humiliating losses in Georgia tell a different story.
5/26/2022
gun violence
gun violence
There Is a Future for Gun Control
By Kevin T. Dugan
The NRA won after Sandy Hook, but today the gun lobby is in disarray and gun safety is slowly making gains in states.
5/26/2022
the money game
the money game
The Rise and Fall of Wall Street’s Most Controversial Investor
By Jen Wieczner
Cathie Wood built a thriving brand out of price-prediction porn — then the tech bubble popped.
5/25/2022
the national interest
the national interest
The Conservative Playbook for Deflecting Anger After Mass Shootings
By Jonathan Chait
Ignoring the obvious connection between gun deaths and lax gun laws in three easy steps.
5/25/2022
texas school shooting
texas school shooting
Beto O’Rourke Confronts Greg Abbott Over Shooting: ‘This Is on You!’
By Matt Stieb
The Democratic candidate for governor interrupted a press conference about the elementary-school shooting before he was pulled away by security.
5/25/2022
early and often
early and often
2022 Midterms: A Guide to the Races Worth Watching
By Ed Kilgore
A cheat sheet to keep track of all the crucial races, primary upsets, and campaign drama — Trump-fueled and otherwise — from now through Election Day.
5/25/2022
early and often
early and often
The Bush Political Dynasty Ends With a Whimper
By Ed Kilgore
The once-dazzling George P. Bush lost badly to Trump-backed Attorney General Ken Paxton, whom he called a “philandering felon.”
5/25/2022
gun violence
gun violence
Why We Keep Letting This Happen
By Ross Barkan
A non-exhaustive list includes the filibuster, radical red states, the archconservative Supreme Court, and a toxic national tradition.
5/25/2022
early and often
early and often
Trump Dumped Mo Brooks. He Made the Senate Runoff Anyway.
By Ed Kilgore
The January 6 speaker survived Trump’s ludicrous “woke” accusation and will face Katie Britt in next month’s Alabama GOP Senate runoff.
5/25/2022
early and often
early and often
The Devil Went Down to Georgia and Lost
By Ed Kilgore
Trump spent the past two years working to exile Brian Kemp and Brad Raffensperger from the GOP, but he couldn’t do it.
5/25/2022
early and often
early and often
President Mike Pence Would Be Worse Than Trump
By Ross Barkan
The former vice-president is attempting to bolster his chances in 2024, but Democrats would be wise to beware any attempt to rehabilitate his image.
5/25/2022
foreign affairs
foreign affairs
The American Running Rescue Missions in Ukraine
By Rachel Nostrant
Kathy Stickel has pulled dozens of people out of harm’s way by putting herself in it.
5/25/2022
plagued
plagued
Welcome to the Next COVID Wave
By Chas Danner
The new wave fueled by the BA.2.12.1 subvariant might not be as big or bad as the last one, but there are still plenty of ways it can go wrong.
5/24/2022
2022 midterms
2022 midterms
Republicans May Have Sabotaged Their Best Chance to Beat Whitmer
By Matt Stieb
Five GOP candidates for governor in Michigan — including the top two contenders — faked signatures to get their names on the ballot.
5/24/2022
adam neumann
adam neumann
Adam Neumann’s New Business Plan
By Kevin T. Dugan
The former WeWork CEO wants to get rich(er) by helping corporations appear more environmentally sustainable than they really are.
5/24/2022
partygate
partygate
Millionth Boris Johnson Pandemic Party Exposed
By Benjamin Hart
Will this be the one that forces his resignation? Nah, probably not.