Yesterday, House Speaker Paul Ryan boasted that his party would follow a deliberate, transparent process to repeal and replace Obamacare. “This is how the legislative process is supposed to be designed,” he told the Today show. “We’re not hatching some bill in a backroom and plopping it on the American people’s front door.” Today, House Republicans made it known that they will release their plan tomorrow and that it will only be made available to House Republicans. Representative Chris Collins tells the Washington Examiner the plan “would be made available Thursday morning to Republicans in a basement room of an office building that adjoins the Capitol.”

It is not clear what distinction Ryan draws between a “backroom” and a “basement room” only members of his party may access.

The reason Republicans want to keep their plan hidden is fairly obvious. It would leave millions of Americans who currently have insurance unable to afford coverage. The Kaiser Family Foundation, working off an early “discussion draft” that Republicans circulated, calculates the difference in subsidy levels between the current system and what House Republicans reportedly would offer. Bottom line, if you have relatively low income, your life is about to get a lot less healthy: 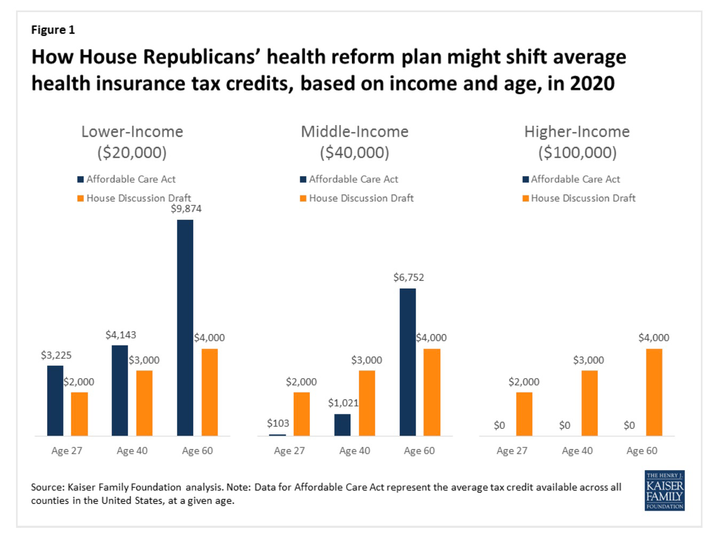 Republicans say the real version of their plan will differ in some regard from the discussion draft, but they have not yet said how. The Congressional Budget Office will officially estimate the bill’s effects on insurance coverage and the deficit. Alas, Collins also tells the Hill newspaper that the committee will vote on the bill before CBO releases its score, so exactly who will get hurt will not be known precisely. “It looks like unfortunately, based on the delays, we may be marking this up and voting on it before we have a score,” Collins said.

Unfortunately. But it’s not like the House Republicans have any control over things like when they schedule their votes on major social legislation.