On Thursday, the House GOP unveiled its latest draft of an Obamacare replacement bill — to select members of their own caucus, in an undisclosed basement room guarded by Capitol Hill police.

Congressional Republicans have long disdained “backroom deals,” particularly ones concerning health-care reform. And, just days earlier, Paul Ryan had boasted that his party wasn’t “hatching some bill in a backroom and plopping it on the American people’s front door.”

So, it isn’t hard to see why liberal pundits would have a field day with the bill’s basement debut. Why Rand Paul did, however, is a bit less intuitive.

I have been told that the House Obamacare bill is under lock & key, in a secure location, & not available for me or the public to view.

I am heading to the secure location where they are keeping the House obamacare bill. I will demand a copy for the American people.

The Kentucky senator proceeded to take the Capitol Hill press corps on a whimsical journey designed to paint his own party’s legislative process as a Kafkafesque absurdity.

.@RandPaul outside the "secret office for the secret bill." pic.twitter.com/fY8BAVqwvd

He was joined on this quest by the Republican chair of the House Ways and Means Committee Kevin Brady, along with some disgruntled Democrats, including House Minority Whip Steny Hoyer and House Minority Leader Nancy Pelosi (and/or, her hounds).

Word spread that the bill was in Room H-157, a nondescript conference room in the House of Representatives. But by the time Paul and his aggrieved colleagues arrived there, the legislation had been moved to a more secure location, according to BuzzFeed News.

The metaphoric had become literal — congressional Republicans could not find their alternative to the Affordable Care Act.

Thus, Ryan’s attempt to give his caucus a sneak peek at their new Obamacare replacement bill — while avoiding press scrutiny — ended in a PR disaster of Rand Paul’s creation.

One reason this whole hunt for a bill thing got so much traction is that it started within the GOP, from Sen. Paul, rather than from Dems.

On one level, Paul’s endgame is fairly obvious: The Kentucky senator wants to sabotage Ryan’s bill because it isn’t conservative enough. Specifically, the legislation appears to preserve some form of Medicaid expansion, along with tax credits to subsidize the health-care costs of low-income Americans. Of course, the bill is far less generous on both these fronts than Obamacare is — as the Kaiser Family Foundation’s scoring of a leaked “discussion draft” makes clear: 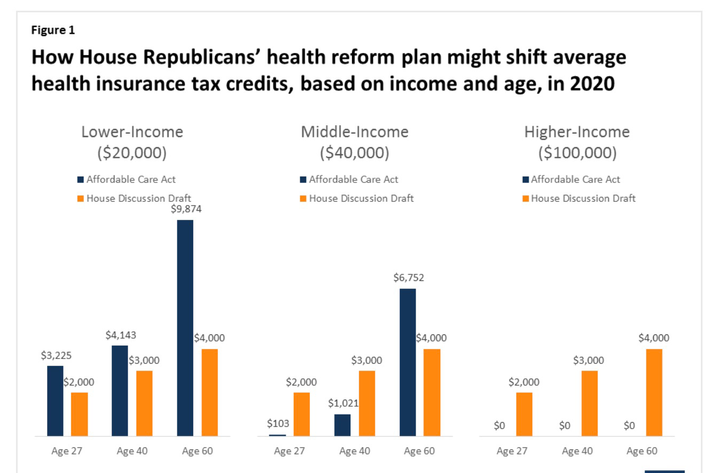 Still, the bill would condemn too few poor people to preventable deaths for the tastes of Rand Paul and the House Freedom Caucus: Their position is full repeal or bust.

Now, there’s no reason to doubt the sincerity of Rand Paul’s commitment to protecting personal liberty (by amplifying the suffering of the indigent). But the same can be said about Paul Ryan’s.

The House Speaker isn’t against fully abolishing the ACA’s redistributive aspects for ideological reasons, but for practical ones: Several Republican senators have made it clear that they have no interest in throwing large numbers of their constituents off of Medicaid. And even if they did, the GOP still needs eight Democratic votes to get their Obamacare replacement through the Senate.

It’s hard to believe that Rand Paul doesn’t understand this. But if he’s cognizant of the fact that Ryan’s bill — or something like it — is his party’s best hope for repealing Obamacare, why is he trying to sabotage it?

One answer is that he understands the political realities of ACA repeal all too well: Medicaid expansion is quite popular in Kentucky, where it has provided 400,000 people with access to health insurance. By supporting an extreme, unpassable version of Obamacare repeal, Paul can keep his tea-party base happy, while avoiding the backlash that might result from making hundreds of thousands of his constituents’ lives appreciably worse.

Sweet spot for Rand Paul is to oppose Obamacare repeal from the right, thus maintaining his constituents’ health care AND his purism.

When Paul wishes to shame Capitol Hill’s RINOs, he notes how they were happy to fully repeal Obamacare — back when they were powerless to actually do so. But that’s precisely what the Kentucky senator is still doing, today.