Some of Donald Trump’s irresponsible statements are difficult to debunk. For instance, it’s hard to prove that Obama didn’t wiretap Trump’s conversations at Trump Tower, even if there’s no affirmative evidence he did. Others, on the other hand, are very easy to knock down, like this tweet from this morning:

122 vicious prisoners, released by the Obama Administration from Gitmo, have returned to the battlefield. Just another terrible decision!

Trump is right that 122 Gitmo prisoners have “reengaged,” as the government puts it. But a look at the government’s own statistics shows that the vast majority of those who did were released by the George W. Bush administration: 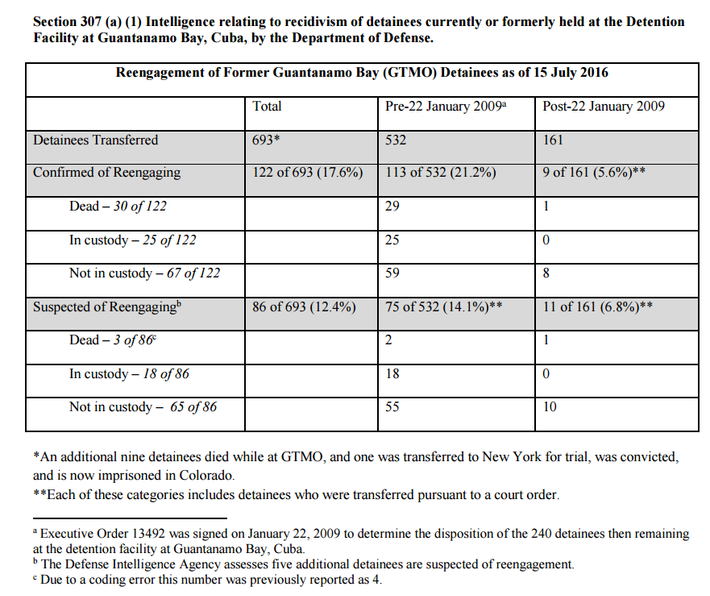 It’s not a small difference: Fewer than 10 percent of the confirmed reengagers were released under Obama, who, as the bottom of the chart indicates, signed an executive order beefing up the vetting process (that same document ordered Gitmo to be shuttered within a year, which obviously didn’t happen). Obama’s new vetting process seems have worked – 17.6 percent of Guantanamo prisoners released by Bush are confirmed to have returned to militant activity, while under Obama that number fell below 6 percent.

Trump’s misleading statement about Obama’s Gitmo record is part of a pattern in the new administration — in late February, Sebastian Gorka, one of Trump’s top counterterrorism advisers, made a similar claim on Fox & Friends. “We know there’s at least 30 if not more than 40 percent recidivism rate from the people released at Gitmo,” Gorka said. “President Obama released lots and lots of people that were there for very good reason, and what happened? Almost half the time they returned to the battlefield.” And back during the campaign, Trump famously contrasted Obama’s shut-it-down promise with his own stance: “We are keeping [Guantánamo] open … and we’re gonna load it up with some bad dudes, believe me, we’re gonna load it up.”

It isn’t yet clear exactly how Trump is going to fill Guantánamo Bay with “bad dudes.” But what is clear is the story he’s trying to tell: Obama had a weak, feckless Guantánamo Bay policy that has put us at risk by releasing scads of dangerous people into the world, and Trump is going to fix Obama’s errors on this front by toughening things up. But the numbers don’t back up that claim, no matter how many times it’s repeated.