The Congressional Budget Office’s analysis of the American Health Care Act describes, in dry budgetary language, a social catastrophe. The bill would deprive 14 million American citizens of their health insurance next year, a number that would rise to 24 million by the end of the decade. It is a proposal that could only be enacted by a party in the grips of an combination of ideological and partisan fanaticism unfathomable to most of the world, and even to most Americans.

The changes Trumpcare would impose upon the health-care system are easy to understand. It is, quite simply, a redistribution bill. It would reduce taxes on the rich, and thus reduce the amount of subsidies for coverage for people who can’t obtain it through their job or Medicare. By 2026, CBO finds, the average subsidy would be about half as large. But the cut would not be distributed evenly. Middle- to upper-middle class customers buying insurance, especially young and healthy ones, would get larger subsidies. Poor, sick, and old customers would get enormous cuts in their subsidy levels. CBO has a graph showing the bill’s effect on Americans who make less than 200 percent of the federal poverty level. The dark-blue bars represent the status quo. The light-blue bars show what Republicans hope to “achieve”: 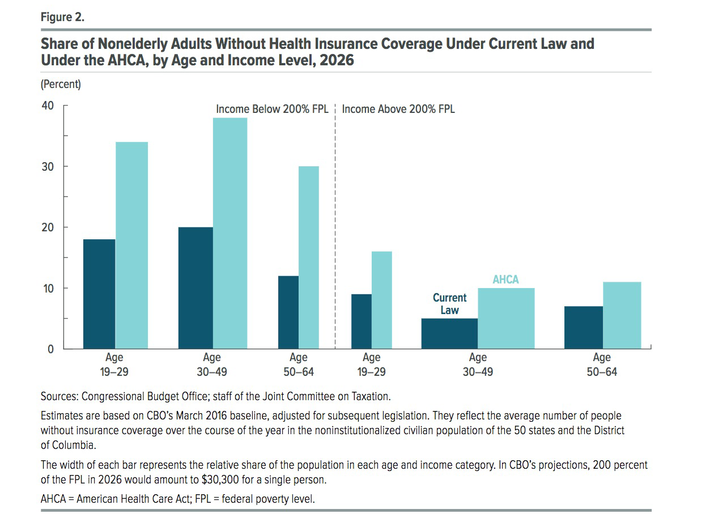 Since the pain would be especially acute among older and rural voters — Obamacare calibrates its subsidies to the cost of insurance, which is higher in rural areas, while Trumpcare would not — many of the victims would be Republican voters themselves. An analysis quoted in today’s Wall Street Journal finds that, in one Nebraska county, a 62-year-old who earns $18,000 a year, who currently pays $760 a year for insurance, would have to pay $20,000 a year under the Republican plan. Which is to say, that person would not be able to obtain insurance, since the cost of care would exceed his entire salary. The moral proposition undergirding this plan is that, if you can’t afford the cost of your own insurance, that is your own problem. It would reduce average premiums, by making insurance unaffordable to people with high medical expenses, and thus driving them out of the risk pool.

This proposal, the centerpiece of the new all-Republican government’s legislative agenda, is an expression of its shared philosophy. Donald Trump has altered the Republican stance on trade and immigration, not to mention self-enrichment by the First Family and the routine propagation of conspiracy theories by the chief executive. But he has hewed closely to the party’s conviction that the central problem in American life is a government that redistributes too much from the privileged to the underprivileged.

It remains to be seen whether enough Republicans have the courage of their convictions to follow through on this plan. Depriving millions of Americans access to medical care would impose pain more directly and widely than any legislative act in modern U.S. history.