The failure of Trumpcare was the product of a crusade to destroy Obamacare that had outlived any factual predicate — Republicans decided Obamacare was a socialist monstrosity that would collapse, and when it failed to collapse, tried to destroy it anyway. Many of the same characteristics can be seen in Donald Trump’s plans to destroy Barack Obama’s climate legacy. It is an angry reflex in search of an idea.

To see the vacuousness of Trump’s proposal, you don’t need to go any farther than its name: the Energy Independence Executive Order. It would make sense if Trump were proposing to replace imported energy with domestic sources. But the entire goal of Trump’s panoply of executive orders — enabling more oil and gas development and weakening regulations on carbon emissions — is to prioritize dirty domestic energy sources (oil and coal) over clean domestic energy sources (natural gas, wind and solar). Whatever reasons Trump may have to favor carbon-intensive energy sources over cleaner ones, “energy independence” has literally nothing to do with it whatsoever.

Trump’s plan will slow the decline of the coal sector, but it will not stop it. The economic and political momentum behind the green-energy revolution is strong enough that Trump could not possibly hope to reverse it. In the power sector, coal plants are wildly expensive to run, even without Obama’s regulations. The only factor keeping coal in place is that it’s often cheaper to continue running an old energy plant than to incur the costs of building new ones. Even so, coal plants continue to shut down and new ones will not replace them. What’s more, energy firms make decisions based on long time horizons. A four- or possible eight-year presidency run by dirty-energy enthusiasts is not a sufficiently strong incentive to make investment decisions that will play out over decades. “Going forward, we anticipate an increase in renewable generation capacity and declining utilization of coal,” one utility executive tells The Wall Street Journal today.

The Trump administration has previously announced its intent to weaken auto-emissions standards. But that may not make much difference if California and other states keep their stringent standards in place — automakers have to sell cars in California, so they’ll meet the tougher state standards even if the federals standards are looser. And the states are going to fight to keep their standards.

Meanwhile, as green energy continues to come down in price, developing countries are meeting their energy needs with wind and solar rather than coal. For the last decade, Republicans have insisted that any domestic reductions in greenhouse-gas emissions would make no difference to climate change, since China and India would simply continue to ramp up their emissions regardless. “Every 18 months, its emissions grow enough to replace the emissions savings the United States will accomplish by hitting the president’s 15-year target,” argued one very typical example of the conservative movement line. “Simply, without China’s cooperation, U.S. efforts are futile.”

This prediction has proven utterly false. Last year, according to the International Energy Agency, renewables accounted for two-thirds of new energy in China. Overall, Chinese emissions dropped by 1 percent even as its electricity use rose by 5.4 percent. Global climate-change efforts have reached a milestone. For the first time in recorded history, carbon dioxide emissions actually dropped without a recession having caused it: 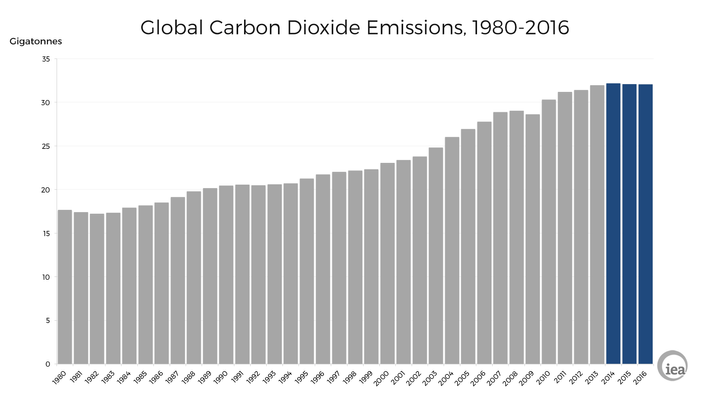 Can Trump do damage to the environment? Yes, he can do a lot of damage. Merely continuing the pace of the green-energy revolution will not be enough to protect the planet from dire effects of climate change. We need to accelerate the pace of decarbonization. Trump’s policies will make it difficult, perhaps even impossible, for the world to wring carbon out of its economy at a fast enough pace.

At the same time, he has no plan or policy vision that can displace the one Obama left behind. Wind turbines and solar panels are still going up, coal is declining. The Tesla Model 3, an electric car with a $35,000 sticker price, begins production this summer. Trump’s irritable gestures against environmentalists and promises to restore the glories of coal will do more damage to the world than his failed crusade to kill Obamacare. What the two policies have in common is that they are the ultimately doomed effort by a brain-dead party to ignore a problem with which their dogma cannot grapple.

More Americans are quitting their jobs than at any other time in at least two decades, adding to the struggle many companies face trying to keep up with the economic recovery. The wave of resignations marks a sharp turn from the darkest days of the pandemic, when many workers craved job security while weathering a national health and economic crisis. In April, the share of U.S. workers leaving jobs was 2.7%, according to the Labor Department, a jump from 1.6% a year earlier to the highest level since at least 2000. …

Several factors are driving the job turnover. Many people are spurning a return to business as usual, preferring the flexibility of remote work or reluctant to be in an office before the virus is vanquished. Others are burned out from extra pandemic workloads and stress, while some are looking for higher pay to make up for a spouse’s job loss or used the past year to reconsider their career path and shift gears.

Forget Going Back to the Office—People Are Just Quitting Instead
—The Wall Street Journal
7:00 a.m.
ideas
ideas
The Delusions of the Radical Centrist
By Eric Levitz
Why Michael Lind’s iconoclastic brand of populist politics fails to convince.
6/12/2021
2022 midterms
2022 midterms
Brian Kemp May Be Outfoxing Donald Trump
By Ed Kilgore
Despite Trump’s vows of vengeance against the Georgia governor, he cannot find a top-tier candidate to run against him.

6/12/2021
covid-19
covid-19
The Implications of the Lab-Leak Hypothesis
By David Wallace-Wells
The epidemiologist Marc Lipsitch explains the risks of the virus research done at the Wuhan Institute.
6/12/2021

'I was completely inside': Lobster diver swallowed by humpback whale off Provincetown
—Cape Cod Times
6/12/2021
the national interest
the national interest
Biden’s Biggest Danger is Congressional Democrats Afraid to Tax the Rich
By Jonathan Chait
Behind the scenes, Democrats are knifing the administration’s legacy.
6/11/2021
awards
awards
Darnella Frazier, Who Filmed George Floyd’s Murder, Gets Pulitzer Nod
By Nia Prater
The Pulitzer board awarded her a special citation, saying her video showed ”the crucial role of citizens in journalists’ quest for truth and justice.”
6/11/2021
politics
politics
Merrick Garland Unveils Plan B for Protecting Voting Rights
By Ed Kilgore
As new congressional legislation stalls, the Justice Department will utilize the powers it already possesses to fight voter-suppression measures.
6/11/2021
explainer
explainer
What’s Driving the Surge in Ransomware Attacks?
By Matt Stieb
From gas to meat, hackers keep disrupting large sectors of the economy. Here’s why the attacks are getting easier and what’s being done to stop them.
6/11/2021
nyc mayoral race
nyc mayoral race
Maya Wiley and Eric Adams Trade Jabs Over Cops and Guns
By Nia Prater
During the most recent NYC mayoral debate, Wiley declined to say whether she would disarm NYPD officers. Adams called her answer “alarming.”
6/11/2021
covid vaccines
covid vaccines
Johnson & Johnson Must Toss 60 Million Vaccine Doses Made at Troubled Plant
By Chas Danner
Only ten million J&J doses produced by Emergent BioSolutions’ Baltimore facility have been cleared for use.
6/11/2021
2021 california recall election
2021 california recall election
Why Recall Fever Is Sweeping California
By Ed Kilgore
Easy rules, intense reaction to COVID-19 restrictions, and a Republican Party with nothing better to do have all fueled a wave of recall drives.
6/11/2021
poltiics
poltiics
Will Women Be Required to Register for the Military Draft?
By Ed Kilgore
After the Supreme Court dodged the question, Congress could move to include women — or abolish registration altogether for the first time since 1940.
6/11/2021
department of justice
department of justice
Trump DOJ Seized Adam Schiff’s Records in Search for Leaks
By Matt Stieb
Prosecutors seized metadata of the top House Intelligence Democrat, Eric Swalwell, and a minor in a failed hunt to find those leaking to reporters.
6/11/2021
side effects
side effects
CDC Flags Rare Cases of Heart Swelling in Young People After COVID Jab
By Paola Rosa-Aquino
Reported myocarditis cases make up a tiny fraction of the nearly 130 million Americans who have had both doses of the Pfizer or Moderna vaccine.
6/11/2021
intelligencer chats
intelligencer chats
Why It’s So Hard to Hire Restaurant Workers Right Now
By Chris Crowley and Benjamin Hart
For one thing, the pandemic allowed servers, cooks, and others to reevaluate their place in a precarious industry.
6/11/2021

Feinstein, asked about some Dems saying they’d choose democracy over the filibuster: “If democracy were in jeopardy, I would want to protect it. But I don’t see it being in jeopardy right now.”
—@AndrewSolender
6/10/2021
politics
politics
Joe Manchin’s Silent Partners in the Senate
By Ed Kilgore
The West Virginian is happy to take the heat for Democrats who quietly oppose filibuster reform, and they are happy he’s happy.
6/10/2021
inflation
inflation
Why Inflation Is Lower Than It Looks
By Eric Levitz
Prices are returning to the pre-pandemic norm, which looks like a giant spike in annual inflation.
6/10/2021
environment
environment
Keystone XL Pipeline Canceled
By Paola Rosa-Aquino
The developer is ending the controversial pipeline project, which would have pumped 800,000 barrels of Canadian crude oil to Nebraska per day.
6/10/2021
d.c.
d.c.
Inside the Big-Donor Scramble for a Biden Ambassadorship
By Gabriel Debenedetti
“They are the closest things we have to somebody being declared a lord or a lady.” But the White House might be changing the rules.
6/10/2021
covid-19
covid-19
The People Who Transformed Themselves During the Pandemic
By Eve Peyser
Is there such a thing as post-traumatic growth?