A man shovels snow in the sleet and snow on March 14, 2017, in New York City. Photo: Spencer Platt/Getty Images

New York City is getting back to normal Tuesday evening, after the blizzard that wasn’t still disrupted transit, closed schools, and kept much of the city, except those snow crews, shut in or “working from home.”

The blizzard warning winter-weather advisory is finished, though the National Weather Service still warns of wind gusts of up to 50 miles per hour until early evening. Aboveground subway service will start up again at 6 p.m., after being shut down since before dawn. Mayor Bill de Blasio promises school will be open tomorrow.

Forecasts until Monday night threatened New York City with around 20 inches of snow. The National Weather service reportedly knew by Monday afternoon that the models were calling for far less snowfall, but, for some reason, decided not to fill the public in. Either way, the nor’easter shifted westward, dumping one to two feet of snow in the regions northwest of the city, and leaving the city with a nasty combination of snow, sleet, and rain.

The snow accumulation for New York City had been downgraded to a measly four to six inches, and that’s about where five boroughs ended up. Central Park logged 7.2 inches. LaGuardia Airport recorded 5.9 inches; JFK came in just shy of 4 inches. The Bronx’s Parkchester neighborhood won, with 8.3 inches. 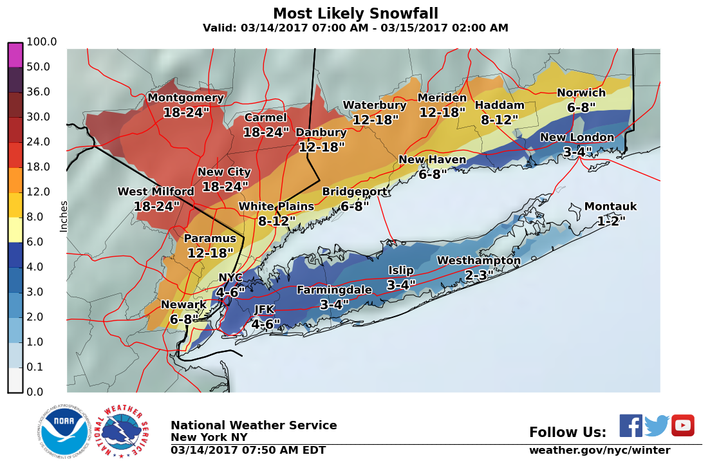 At least take consolation that the storm delivered with some thundersnow.

#thundersnow spotted on radar. Video also shows the dividing line between snow in blue, sleet in purple, & a mix in #nyc. #blizzard2017 pic.twitter.com/34Po1XVof8

New York City Transit buses are still operating, though definitely check for service changes before venturing out to catch one. Cuomo shut down Metro-North as of noon Tuesday because of the extreme snowfall inland; limited service has resumed as of early evening. The Long Island Rail Road is operating on a regular weekday schedule, but with some delays and cancellations. MTA officials indicated that they expect subways and commuter lines to be back to normal by Wednesday morning.

It remains bitterly cold outside, and temperatures will dip overnight into the low 20s, with windchills in the teens. Officials are still urging people to be careful venturing out on the roads; the brutal cold puts slick roadways at risk of refreezing.

Now for the people who actually got the snow downstate New Yorkers were promised. Counties such as Putnam, Rockland, and Orange saw more than a foot of snow, and some spots in northern New Jersey also got within range of a foot. Close to 13 inches has fallen in Albany so far. Roads are closed and a travel ban is in effect in upstate Broome County, which includes Binghamton. That city could see close to 30 inches, and the National Weather Service reports that snow is still bearing down at the rate of two to four inches per hour in central New York:

Persistent band of #heavysnow across central NY continues to drop snow at rates of 2-4" per hour. #NYwx #winter pic.twitter.com/9r0PLUcdxT

This is what we are dealing with in Binghamton, NY! Dont just watch- listen to it as well. Its a good snow day laughter❄️☃️😂 pic.twitter.com/TbvKArokh8

We're nearing 26" of snow on my Eastside yard... we're snowing at a clip of 3" an hour in Binghamton! @weatherchannel pic.twitter.com/oQQKq6lhoT

Parts of New England could still get hammered, though it won’t be as bad as first predicted in many parts. Boston may get just shy of a foot, though the city’s public schools will remain closed Wednesday. Parts of Vermont could get up to 22 inches.

Meh. #StellaBlizzard was meh. This is on south side of #Boston. pic.twitter.com/3duGSgkoug

The Washington, D.C., metro area got a couple of inches, and the federal government opened after a morning delay. Luckily, President Donald Trump was on top of it.

And though the blizzard went bust in New York City, it still looked pretty nice for awhile:

Here's a look at the snow along Broadway in Midtown Manhattan this morning. Tag your tweets with #abc7ny to send us your pics #noreaster2017 pic.twitter.com/IB8WOFLLRw

Trying to walk on #CentralPark What are you doing on YOUR snow day? pic.twitter.com/3z5xS4FIPt

NYC Sanitation update. Since the start crews have salted 87% and plowed 96%. There are 2269 spreaders and plows out. @NBCNewYork pic.twitter.com/EANAX7MTdH

Current scene outside my office in Albany. What does your view look like on this snow day? pic.twitter.com/77nnQq2vZ3

THE FEED
3:56 p.m.
what we know
what we know
Highland Park Shooting Death Toll Rises to 7: Updates
By Intelligencer Staff
The 21-year-old gunman appears to have picked his targets at random, police said, and his motive remains unclear.
3:02 p.m.
plagued
plagued
The BA.5 COVID Surge Is Here
By Chas Danner
The worrisome Omicron subvariant, which is better at reinfecting people than any other, is now the most dominant strain in the U.S.
12:00 p.m.
sticker shock
sticker shock
Why Don’t Democrats Care About the Housing Emergency?
By Ross Barkan
Once the domain of big cities, the surging cost of rent across the country is driving record inflation.