The Art of Data

A throng of well-dressed people weave between exhibits in West Soho, admiring the likenesses of seven of history’s most important thinkers: Marie Curie, Nikola Tesla, Paul Rand, Charles Darwin, Eleanor Roosevelt, Josephine Baker, and IBM’s Thomas J. Watson. However, Art With Watson: Hidden Portraits, which runs through May 7 at Cadillac House, is far from your typical art show. The subjects on display are rendered in a manner lightyears beyond traditional oil portraits or sepia-toned photos of old: The artworks – UV-reactive screen prints, mirrored cubes, even 3-D projections set to music – are modern, even futuristic-feeling. 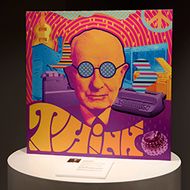 But most importantly, when crafting the works, the artists had deeply hidden insights on their subjects top of mind. Consider the fact that Marie Curie identified as a mother first and foremost, contrary to the cold, solely scientific image history has painted. Or, at the core, Tesla was an artist trapped within the wrappings of an inventor.

Surfacing the Truth Via Data

So, what exactly does this mean, and how were the “true natures” of these subjects — the insights that have eluded our perception for decades — determined? Contrary to what you might expect, artificial intelligence is at the heart of it: IBM Watson. Watson is a cloud-based cognitive system that understands, reasons, learns, and interacts with humans — Watson continuously gains knowledge from these exchanges, sifting through and interpreting data. You may have heard of Watson’s Jeopardy! victory in 2011, his ability to help physicians evaluate treatment options, or his role in helping designers create the first “cognitive dress” for the 2016 Met Gala. In short, Watson’s quite accomplished, and in multiple disciplines.

When it comes to the installation at Cadillac House, Watson’s role was that of collaborator, processing and unpacking data galore to inform the artists’ works. In the case of Marie Curie, Watson was fed her autobiography, her public and private writings, her lectures, a biography penned by her daughter, articles about her, her correspondences, photos, and more. Using several APIs, including one focused on understanding language, Watson was able to recognize common semantic features and themes — even when they weren’t explicitly called out in the text. Watson found that Curie’s strongest association was with children, and that this association was typically paired with joy: Curie’s greatest passion in life was her family, even above her research.

From there, artists took the reins and interpreted Watson’s findings in their preferred mediums. Sean Freeman, a typographer, illustrator, and photographer, and Eve Steben, a creative producer, both of London’s THERE IS, joined forces to surface Watson’s discoveries on Curie through art. “We were really interested in all the data that came from Watson, which was a strong dichotomy … Watson tapped into a rather unknown side of Marie Curie – a loving person, a very warm mother,” explains Steben. “We thought we would bring that to life inspired by her discoveries with radioactivity through glowing elements. And, play with colors and lights and man-made things and machine-made things to create a piece that would reflect all these dimensions.”

So, what’s it actually like to collaborate with the world’s most advanced cognitive system? To find out, we caught up with several of the individuals behind Taylor James, the creative collective that brought to life Watson’s analysis of Charles Darwin. Watson uncovered that the concepts Darwin outlines in his books on evolution are very much like those behind puzzles and board games.

What were the key takeaways from Watson’s analysis that most resonated with you and helped form your vision?

Mark Knowles (executive creative director, Taylor James): I think what was really interesting was that we were trying to transport the viewer into a situation where Darwin had gone to the Galapagos Islands and he’d seen all of these characters – these weird, magical, wonderful creatures – for the first time himself. We were looking to kind of put the viewer in that same situation. We’re used to seeing those creatures now, but we’ve illustrated these beautiful designs, so it’s about transporting the viewer into that same sort of situation, but also tying in the unexpected. All of the insights that Watson turned up were very, very unexpected: It was also about the fact that he loved puzzles, and he would play backgammon with his wife at eight o’clock every night. It was also about how everybody thinks he’s this adventurer, but in actual fact, he hated the sea and he hated going on The Beagle. Watson had analyzed that process, and collated all this material together, and brought to the fore all of these really deep understandings that you wouldn’t necessarily get by just kind of skimming through textbooks yourself.

It’s like marrying the actual man and his work.

MK: Exactly. And it was also about us interpreting that from a creative perspective, because it was very abstract. We weren’t trying to recreate something that was already out there, so we had to take all that information and turn it into a visual that people could understand.

Adam Isidore (managing director, Taylor James): We typically look at Darwin from a good distance a good long time ago. So, how do we keep that refreshed, and add some sort of modernity to what the look of that is? Then, I think the process of scientific discovery, and the process of creative discovery are very similar. There’s something you’re just trying to clear away to understand the essence of something, and to make connections between what you see and what you can’t see, and what’s left brain and right brain. I think our illustrator did a wonderful job of intuiting what that would be like.

A lot of the time art is very subjective, so we create things that we think look beautiful and they’re amazing, but it’s great to have some form of logic to build that on.

MK: A lot of the time art is very subjective, so we create things that we think look beautiful and they’re amazing, but it’s great to have some form of logic to build that on. What we did here was take all that information to create this kind of underlying thread and logic to the decisions that we made throughout the creative process … so that was really fun for us.

How were the actual aesthetic decisions made? For example, the choice of the style of illustrations, or constructing the puzzle from wood.

Jason Guerrero (creative director, Taylor James): Well, when we started off, the representation was sort of more traditionally how you would think of things. We started off with drawings more like da Vinci – kind of old school. But, one of the things we discovered was that in order to highlight the fact that Watson was giving us unexpected results and insights that nobody had really thought about, our visuals needed to reflect that. We changed the visuals from something that you would expect from those times, and made sure that it was something unexpected in representation to reflect the unexpected nature of the data that we were getting from Watson.

There’s another layer: People can actually physically interact with the puzzle. Was that always the intent?

AI: Originally, ideas go through a whole bunch of incarnations before you end up with something, and at one point, this was supposed to be a digital game. Time did not permit, and I think that was a great benefit, because it seems much better as an analog puzzle.

AI: So, we’re really glad that the constraints of the time-space continuum made us have to do something that was physical instead of digital.

What do you think about the fact that this sort of collaboration with man and machine can exist? What does this mean for the art world?

MK: It kind of goes back to what I was saying a little bit earlier: A lot of the time it’s very difficult to take all these disparate sources and combine them to pull out and extrapolate reasoning. We don’t have time to do that on projects. It’s great to have a very impartial analysis of all of those things, and I think it’s bringing logic to creative reasoning, which is actually the major kind of influence behind the work with Watson. It’s this collaboration between man and machine that actually yields very different results.

AI: Our whole industry’s sort of built around utilizing technology in the pursuit of creativity, so it’s not a stretch. We fight our computers all the time. We live and die by their strength, and their power, and how they can unharness our creativity, so it was nice to feel like a piece of technology was one of our co-creators as opposed to just a tool.

Taking It All a Step Further

The unexpected revelations in the Art With Watson: Hidden Portraits installation extend beyond the seven major works on display. A “cognitive photo booth” in the center of the space leverages Watson’s Tone Analyzer API to tell us more about the subjects it captures, namely gallery-goers. If you opt in, Watson asks you several questions to inform your print-out, which is a portrait comprised of tiny emojis – a sort of nod to pointillism. Watson’s findings on Paul Rand, and designers’ Blake Rutledge, Chris Rowson, and Robyn Makinson’s interpretation of these findings, inspired the concept. Watson uncovered that Rand’s own writings are fraught with anger and in stark contrast to the lighter themes in his graphic design work. When you look closely, you’ll find that the installation’s plexiglass portrait of Rand is similarly made up of hundreds of emojis … the majority of which (67%, to be precise) are not pleased.

Speaking of looking closely, as patrons interacted with Watson to reveal their own true personality traits, peals of laughter and surprise filled the space. The collaboration between the artists and Watson had accomplished its goal: opening our eyes to a new perspective, and beyond even that, a deeper understanding of ourselves.

Art With Watson: Hidden Portraits runs through May 7 at Cadillac House.

Artists Worked with IBM Watson to Turn Data Into Art