As The Fate of the Furious races toward theaters this Friday, moviegoers might ask themselves: “What internet destination could I visit in order to find more information about, or celebrate the career of, longtime Fast and Furious anchor Vin Diesel?” For this question, there is only one answer: the Vinbook.

There are few destinations on the internet more joyous, or perplexing, than the Vinbook, the name of Diesel’s official Facebook page. Diesel, who administers the page himself, uses it as an outlet to send love to his fans; in turn, his fans use the page as an outlet to send love to Vin. Diesel rarely goes a day without posting something online, reflecting on his good fortune, the love of friends and family, or the sheer size of the Vinbook community.

And the Vinbook is huge. To his great credit, Diesel realized early on how powerful a Facebook following could be, and his success on the platform has earned him a legion of admirers, including Mark Zuckerberg himself. The Vinbook currently has more than 101 million “Likes,” trailing behind only Coca-Cola, Shakira, Cristiano Ronaldo, and Facebook itself.

For a time, the Vinbook was unique among A-list celebrities for how much of its content was generated by fans: Every day, for years, fans have been uploading vast libraries of amateur art to the page, and Diesel would take the time to recognize and comment on the art — sharing his favorites from the page itself. One need only browse through his 879 cover photos, 1,359 timeline photos, or 569 profile pictures to see thousands of examples.

Vinbook’s artistic production has slowed lately, but in anticipation of the latest Fast and Furious movie hitting theaters, I plucked a few of my favorites and sat down with esteemed New York art critic Jerry Saltz to discuss the artistic output of Vinbook. 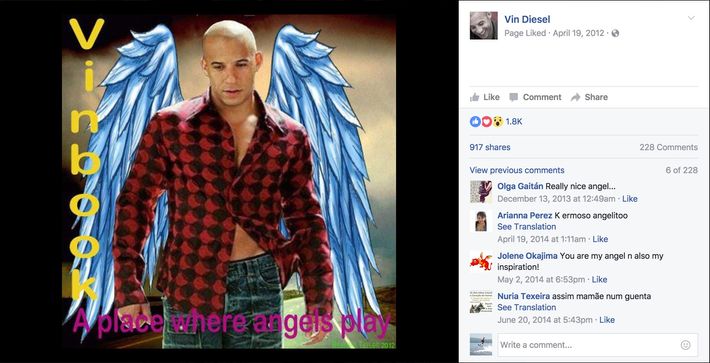 Jerry Saltz: I’m guessing many of these are made by men, for Vin. My guess is, they’re made by straight men, about Vin, who use the Vin body as a device for nonsexual male love. Like worshipping a Greek god. Needless to say his whole look is modeled on Greek sculpture — it has no features, it has no hair. In this case, he has wings — no less — like a risen god.

Brian Feldman: What do you think of the angel wings?
I think they’re completely clichéd. They show everything at once, like nonart does. This image will always look the same. It can’t change; in that sense, it is graphic art. It is supposed to give a message; it gives it; it is done. So we use it instantaneously; it is supposed to pierce us so we go, “a place where angels play? Vinbook.” It could be an ad for Calvin Klein jeans.

The Vinbook branding is very strong throughout all of these images. The Vinbook itself is a place people go. 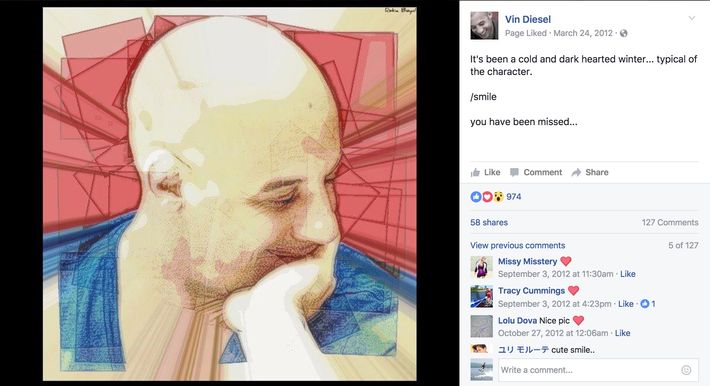 He sometimes writes captions. “It’s been a cold and dark-hearted winter, typical of the character.” I’m not sure which character he’s talking about.
Again, this is a classic kind of graphic illustration. Not creative. It’s by an amateur. Like the other one, it has total sincerity, total admiration. And again, as with the last one, in my opinion it has male content. Straight, male content. But I could be wrong on this one.

It’s got a name in the corner. It was made by Robin Boyd. A lot of the comments are just hearts.
Yeah, “We love you, Vin!” The more we idolize, the greater we are in our idolatry of a star; we join this gigantic group of people. My heart is just one of billions, and we’re feeding him. It’s like the great Chinese emperors or the Pharaohs, where you can worship. It’s organizing chaos. 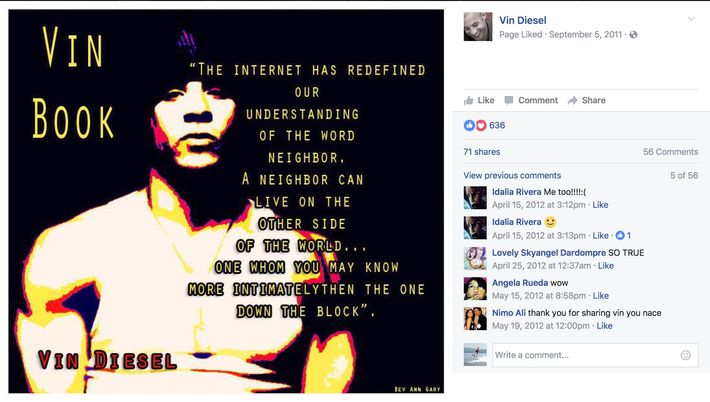 Well, I think because it relies so much on text.
Very good, I agree. That tells us that the other images are being carried by the Vin body, and the Vin identity. And once you change it, it’s gone.

I don’t know how much you look at memes, but the idea of putting a bunch of text on an image is a very new sort of internet thing. Put an inspirational quote on it; you say, “Vinbook,” but also “Vin Diesel.”
This person in 2011 is inventing, without knowing it, a new format that we now use. The new form of meming. And our videos that we watch in bed, where we don’t turn the sound on. Can I just see the signature?

It says “Bev Ann Gary” in the corner.
Amazing. 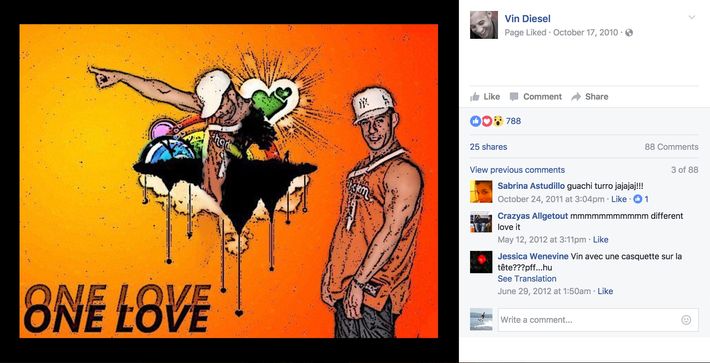 One Love, One Love. He’s an open-cultural signifier of both black, white, masculinity, and a loner. It’s important to recognize that Vin has been alone in all these shots. He dominates the frame; he is all there is.

I like that there are two of him in this one. I feel like they’re interacting with each other a little bit.
Oh? How do you read the narrative?

This guy in the cloud is clearly performing for the crowd in some way. And this guy is just like, “Do you see my friend? Who is also me, Vin Diesel?” He’s like his hype man.
I think you’re absolutely right, and I think that you’re right that there’s two of him. So he’s a split character, but to me, what it also shows is the lack of depth in the Vin, because he’s the same character to me in both. That is unlike another male body that can be worshipped across genders, which is the Rock. Where the Rock brings a lot of irony, self-awareness, humor, and is therefore a better person, [leans in close to tape recorder] and a better actor. 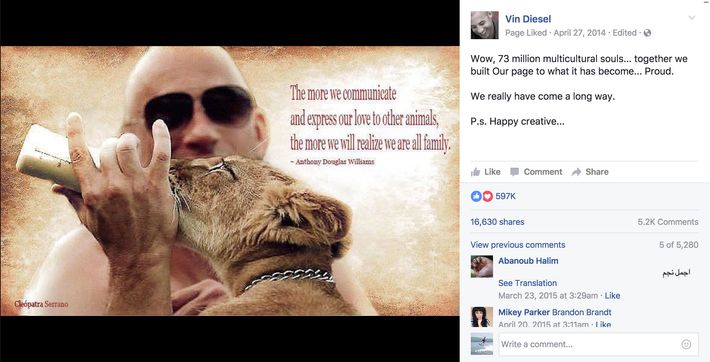 This one is a milestone. They hit 73 million likes on the Vinbook.
Jesus.

The caption is “Wow, 73 million multicultural souls … together we built Our page” — with a capital O — “to what it has become … Proud. We really have come a long way. P.s. Happy creative …”
Wow.

He says “happy creative” a lot on the Vinbook.
What do you think that means?

I can’t tell if “creative” is a noun or an adjective. So it’s either he is happy and creative, or being creative makes him happy. Or he is a happy creative.
I think that’s beautiful, what you’re saying. And he also loves puppies, in this case a little baby lion. So even though he’s a killer, he also is a sensitive soul. So he’s benign, omnipotent, and again, of course, a man with no eyes. 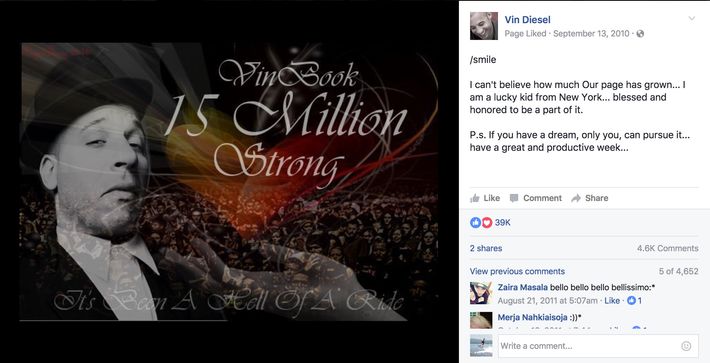 The one we looked at before was from 2014, so in four years, he gained about 60 million Likes.
Okay, to his great credit, this image is from 2010, and he’s very ahead of the curve, if you really get honest. It doesn’t matter that he’s easy to make fun of. But I will say that’s really admirable. I don’t like his style, his graphic style, but I am stunned by how far in front of things he was. You know why, I think? Because the rest of the culture doesn’t embrace Vin, so he — like you, like me, like all of his idolaters — has to be an individual and go alone. And that’s the most beautiful part of his brand. “We are strong.” He’s the first Trump.

In a way …
Is he pro-Trump or anti-Trump?

You know, the Fast movies are all about a diverse cast of people taking on the system.
They are? I saw the first two alone, sitting in theaters. 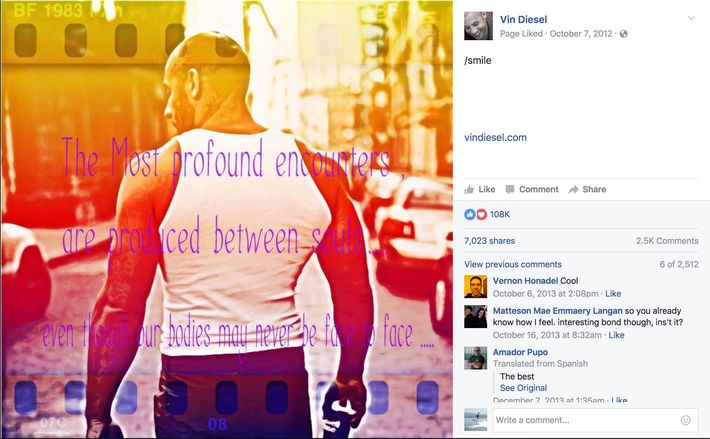 What do you think of the analog film trimming?
I think that’s super neat, and I didn’t even notice that. So I guess that’s nostalgic, back to a more authentic era of 1983 — the picture says. It’s like when things were burned out, and we walked the streets together. I want to say something, Brian: It’s important that Vin is the curator of this. That I’d completely missed, and I forgot that. I think that you’re on to something here — you do want him to pick you. Like any sexual selection, the animal presents — like a baboon, an estrus presents. And then the great alpha male selects.

As is the case in the Fast and Furious movies. He’s a sensitive soul.
How many people has he killed? Do you think it’s in the thousands? Tens of thousands?

It’s gotta be hundreds at most. Actually, probably a couple dozen.
And who are they that he usually has to kill? Spies and such?

The franchise has changed so much. It’s a lot of organized crime, corrupt cops.
The system, the man.

Generally, he’s not killing people as much as forcing them to get into bad car wrecks. 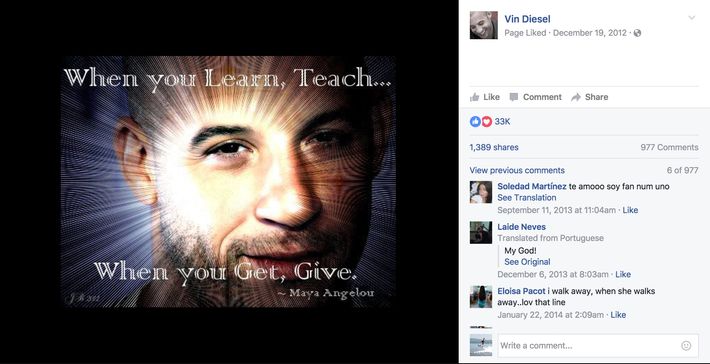 This is like Jesus teaching the meek, the young. And who did this one? JB … something. What do you make of this one? 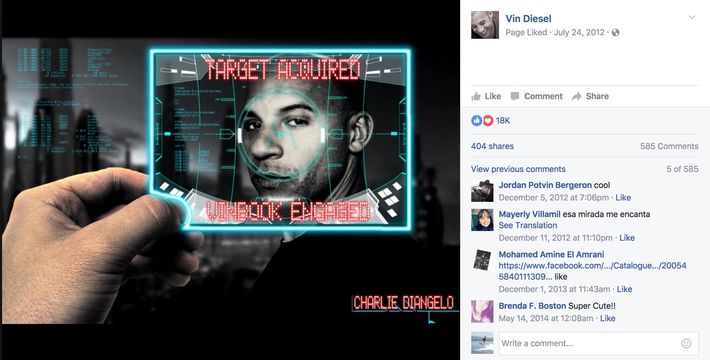 This one’s a little sci-fi.
“Target acquired … Vinbook engaged.” That’s my favorite one. I love that it’s self-referential. It’s Vin about Vin about Vin; it’s a hall of mirrors.

I think the fans are holding it.
That’s the you, one of the 100 million. It’s like a selfie, too, isn’t it? This is a very creative non-selfie. But Vin posted it, so it is a selfie.

I’m looking at some of the comments. They’re saying, “cool,” “super cute,” and “always in the mix.”
What do you think that language is? I have an idea, but what’s yours?

They’re praising him.
It’s praise. And it’s done — again back to the Greeks — in a very short, almost epigrammatic way. All of them are short, unlike my Facebook page (I would like to brag that I have about a half-million followers). On my page, in the art world, people talk on and on; it drives me crazy. I always say to them, “Keep it simple, stupid,” and these people are brilliant because they do. 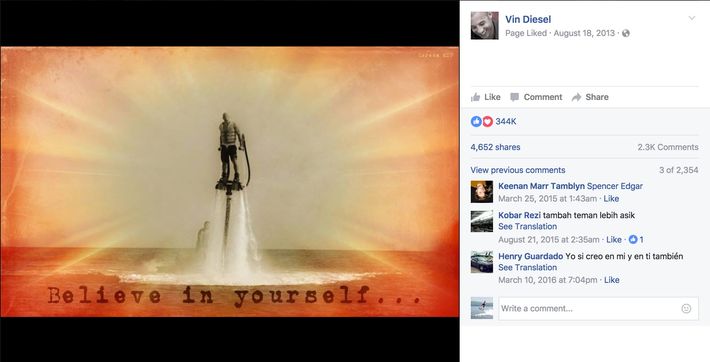 So this is Vin on one of those water-propelled hoverboards. He’s on vacation somewhere. It says, “Believe in yourself …”
That’s a great message. It’s positivist. I think it’s probably empty, but it’s what we’ve got right now.

He posted this one Valentine’s Day. The thing I like is, it’s clear that it’s just him and one other person filming this, and he’s still like, “Yeah, let’s do this.” It’s very amateur and sincere.
Can I quote Oscar Wilde?

I’m not going to stop you.
Oscar Wilde once said, “All bad poetry is sincere.” So sometimes you have to be careful of sincerity.