Obamacare is a Trojan horse filled with these people. Photo: Ronen Tivony/NurPhoto via Getty Images

The Affordable Care Act (a.k.a. Obamacare) has done a lot of material good. Through the expansion of Medicaid and the provision of federal subsidies, the law provided access to basic medical care to 20 million Americans who’d previously gone without it. Through its various cost reforms, it brought medical inflation lower than it had been in decades.

But Obamacare also remained resolutely unpopular throughout its author’s tenure in the Oval Office, and did few favors to its Democratic boosters down-ballot. This led many liberals to see the law as a policy success and a political failure. Which is clearly true, from one angle.

But recent weeks have provided fodder for a contrarian take. Without question, the ACA has made great progress on its core objectives. But the law’s signature marketplaces did not replace much of the nation’s employer-based insurance system, as health economists once hoped. And the individual mandate has proven far too lenient to induce young, healthy people onto the rolls. Combined with the GOP’s various acts of sabotage, this flaw has left many of the law’s rural marketplaces devoid of competition.

What’s more, if we define the law’s ultimate policy goal as providing affordable health care to all Americans, then it has been a failure: More than 25 million people remain uninsured (a figure that’s been inflated by Republican governors’ rejection of Medicaid expansion), and many who are insured cannot afford to take full advantage of their benefits.

But in the long run, these policy defects may be overshadowed by the ACA’s great political achievement: popularizing the idea that the government should guarantee health care to its citizens as a right.

This is not a radical idea. Every other advanced democracy arrived at it long ago, and many Americans already subscribed to the notion before Obamacare was ever introduced.

But as the Trumpcare debate illustrated, the ACA grew the constituency for government-provided health care while fostering the American public’s sense of entitlement to affordable insurance.

The GOP anticipated this development, which is why it fought so hard, on so many fronts, to kill the law. When those efforts failed, for short-term political gain, many Republicans chose not to attack Obamacare’s core premise — that the government should facilitate universal access to basic health care — but rather to attack the law for failing to realize that left-wing ideal.

“What you need to understand is that there are 25 million Americans who aren’t covered now,” Mitch McConnell told Face the Nation back in January. “And many Americans who actually did get insurance when they did not have it before have really bad insurance that they have to pay for, and the deductibles are so high that it’s really not worth much to them.”

Republicans notched some electoral wins by pairing this argument with other attack lines that painted Obamacare as an act of austerity (see: death panels, keep the government’s hands off my Medicare). But the long-term effect of these attacks was to shift the terms of America’s health-care debate dramatically leftward. Once the GOP got itself back in power, and substituted its actual policy agenda for its cynical rhetoric, it promptly discovered that said agenda was unpassable.

And once the public understood that its (current) options on health-care policy were Obamacare or throwing millions of people off Medicaid to ease the economic anxiety of millionaires, Obamacare became much more popular. 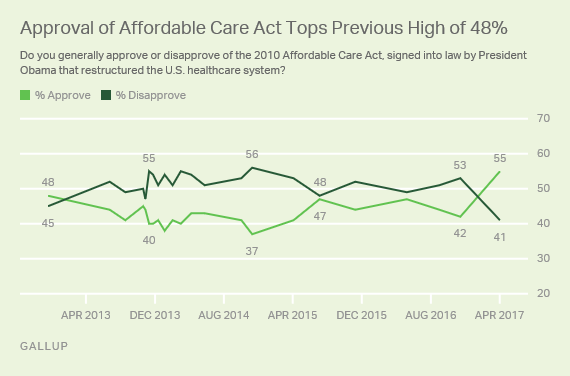 61% of Americans, including 39% of conservatives, favor "creating a federally funded health insurance system that covers every American" pic.twitter.com/FPheyrQifP

Recently, Vox’s Sarah Kliff conducted a focus group with Obamacare enrollees who had voted for Trump. Her findings offer an anecdotal testament to those of YouGov:

We were in Harrisburg, Pennsylvania, sitting in a sparse conference room at a big white table. Perry, who co-owns the research firm PerryUndem, asked the six-member group a question: Who likes Canada’s health insurance system? Who wishes we had something like that?

Half of the hands shot up.

“There’s a lot of countries that it works very successfully in,” Michelle said of a Canadian-style single-payer system. (Focus group participants agreed to have their first names published.)

“Everybody, despite income, should be encouraged to take care of their health,” Eric added.

“I actually like socialized medicine,” Sharon, another of the focus group participants, told us.

The Republicans didn’t just lose the battle on health care — they lost the war.

+Comments Leave a Comment
Obamacare Was a Political Success

THE FEED
9 mins ago
early and often
early and often
Judge Orders Release of Video Showing Attack on Paul Pelosi
By Matt Stieb
The body-cam footage of the responding officer shows Pelosi and assailant David DePape struggling over a hammer before the assault.
13 mins ago
the national interest
the national interest
The Durham Probe Was Barr’s Witch Hunt
By Jonathan Chait
A shockingly unethical crusade to vindicate Trump.
16 mins ago
what we know
what we know
Memphis Police Set to Release Tyre Nichols Footage: Updates
By Chas Danner
The video will be made public tonight. Five officers have already been arrested and charged with Nichols’s murder.

11:25 a.m.
just asking questions
just asking questions
How an 18-Year-Old Got His Crossword Puzzle Into the Sunday Times
By Benjamin Hart
High-school senior Garrett Chalfin on winning over the editors — and the jocks at summer camp — with wordplay.
9:00 a.m.
guns
guns
Coming Soon to Stores: The AR-15 for Kids
By Matt Stieb
Next month, an assault-style rifle could wind up in the hands of children unless regulators step in.
8:00 a.m.
early and often
early and often
The Data-Driven Strategy Behind Democrats’ State-Level Success in 2022
By Eric Levitz
The president’s party almost always loses state-level power in midterm elections. Here’s how Democrats bucked that trend last year.
1/26/2023
the talented mr. santos
the talented mr. santos
Here’s Every Single Lie Told by George Santos
By Matt Stieb
Navigating the many exaggerations and falsehoods of New York’s newest representative.
1/26/2023
early and often
early and often
Brian Kemp for President Makes a Lot of Sense
By Ed Kilgore
Georgia’s governor doesn’t have the warmest personality. But in trouncing both Donald Trump and Stacey Abrams, he showed world-class political chops.
1/26/2023
master of the garden
master of the garden
James Dolan on Blacklisting His Enemies: I Have Rights, Too
By Matt Stieb
The MSG owner defended his use of facial recognition to ban lawyers who have sued him in a highly entertaining local-TV rant.
1/26/2023
screen time
screen time
How Much Does Unbanning Trump Really Matter?
By John Herrman
On the internet, you can never really go back home.
1/26/2023
2024 senate races
2024 senate races
Adam Schiff Runs for Senate on the Enemies He’s Made
By Ed Kilgore
Trump and Republicans inadvertently elevated a mild-mannered moderate who is taking his shot at Dianne Feinstein’s seat.
1/26/2023
just asking questions
just asking questions
Why the College Rankings Are Getting Less and Less Relevant
By Benjamin Hart
Former college president and longtime rankings critic Colin Diver on U.S. News & World Report’s moment of reckoning.
1/26/2023
the national interest
the national interest
Ron DeSantis’s Long War on Black Political Power
By Jonathan Chait
It’s not just a “culture war” — it’s about political representation.
1/26/2023
chinese democracy
chinese democracy
The Radical, Lonely, Suddenly Shocking Life of Wang Juntao
By Christopher Beam
After half a century of resisting the Chinese Communist Party, a dissident confronts murder and espionage in Queens.
1/25/2023
early and often
early and often
Marjorie Taylor Greene’s Desperate Plan to Be Trump’s Vice-President
By Ed Kilgore
MTG just got her first committee assignments and can’t control her mouth, but she might be on Trump’s shortlist. He’d be nuts to pick her.
1/25/2023
tremendous content
tremendous content
Why Jeff Bezos and Lauren Sánchez Are Relationship Goals
By Margaret Hartmann
Think they’re just disgustingly wealthy? Think again! Sánchez’s ‘Wall Street Journal’ Q&A reveals they’re hardworking, humble, and totally adorable!
1/25/2023
early and often
early and often
Trump’s Terrified 2024 Rivals Show It’s His Race to Lose
By Ed Kilgore
Republicans’ reluctance to enter the presidential race is telling, and the longer they wait, the more likely Trump’s renomination becomes.
1/25/2023
wyd
wyd
Trump Has Reportedly Discovered the Modern Magic of Texting
By Matt Stieb
Welcome to 2023, sir.
1/25/2023
sports
sports
Something’s Still Not Quite Right at the Baseball Hall of Fame
By Ben Jacobs
Barry Bonds and Roger Clemens are finally off the ballot, but the steroid era’s influence lingers.
1/25/2023
war in ukraine
war in ukraine
U.S. Tanks Are on Their Way to Fight Russians in Ukraine
By Matt Stieb
It may be Washington’s biggest escalation, though Biden downplayed the move.
1/25/2023
politics
politics
New Yorkers Will Get to Vote on Their Own Equal-Rights Amendment
By Nia Prater
Lawmakers passed legislation that would add new protection classes to the state’s constitution.
1/25/2023
early and often
early and often
Pat Buchanan, a Vindicated Extremist, Packs It In
By Ed Kilgore
A man who once seemed marginalized is now a MAGA prophet who is retiring with a lot of malign accomplishments.
1/25/2023
poll positioin
poll positioin
Why Republicans Won’t Name Their Debt-Ceiling Demands
By Ed Kilgore
Polls show the public agrees with the GOP on the need for spending cuts — but only if it keeps its proposals abstract.
1/25/2023
the system
the system
The Uprising That Ran Out
By Zak Cheney-Rice
The death of Keenan Anderson marks the end of an era.
1/24/2023
early and often
early and often
Centrist House Democrats Picked a Bad Time to Have an Identity Crisis
By Ed Kilgore
With Congress closely divided, the Blue Dog Coalition could be having a moment. Instead, it’s falling apart over a proposed name change.