By the time Republicans abandoned their plan to repeal and replace Obamacare, the bill had fallen to 17 percent in the polls, which is extremely bad. That’s the sort of thing that can happen when people on all sides of the political spectrum are criticizing a bill. President Trump and some of his allies in Congress continue to talk up the prospect of reviving their bill somehow, in some form.

But a new ABC News poll shows that the public opposes not only the Republican plan but the entire concept of repealing and replacing Obamacare. By landslide margins, the public wants Trump and Congress to keep and improve the law rather than try to replace it. And his threats to make the law implode if Democrats don’t agree to his terms are even more unpopular — 79 percent of the country wants him to make the law work, and only 13 percent wants him to make it fail: 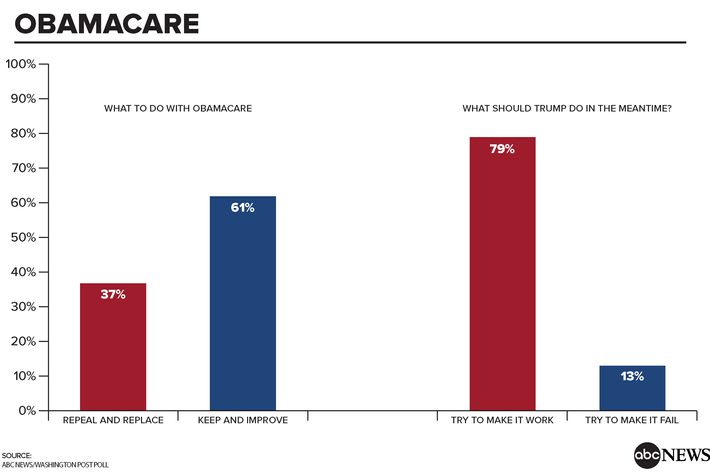 Again, the issue for them is not that they have failed to design a bill that carries out their promise, it’s that their promise itself is deeply unpopular.

That is not even the end of the bad news. Republicans are trying to finesse their unpopular bill by letting states opt out of the law’s requirements that insurers cover minimum health-care treatments and not discriminate against people with preexisting conditions. Americans hate that idea, too: 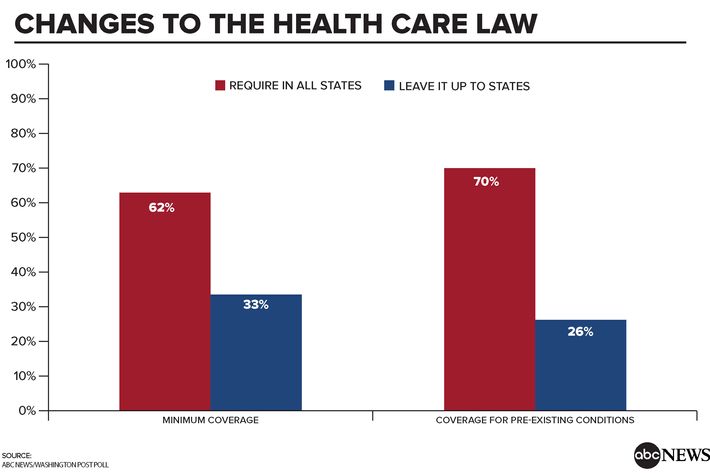 Republicans spent years deluding themselves into believing that the public was on their side in the health-care fight. The truth is that they relied all along on posturing broadly against the status quo and promising better, cheaper health insurance with lower premiums and deductibles while opposing every mechanism to pay for it. Once they had to produce the unicorn they had promised, the whole scam has collapsed on them. A total retreat, in which they walk away from their repeal crusade and cut a deal with Democrats to make the law work better, would be humiliating. But it’s their least-bad option.

8/7/2022
plagued
plagued
What Is Going on With America’s COVID Booster Plan?
By Chas Danner
The Biden administration wants to reboot the U.S. booster drive with reformulated vaccines this fall. Here’s what we know.
8/7/2022
early and often
early and often
Arizona Has Become a Paradise for Election Deniers
By Ed Kilgore
Promoters of Trump’s election fables swept four major statewide Republican primaries. The GOP could pay a price in November.
8/7/2022
early and often
early and often
All the Juicy Gossip From Jared Kushner’s Book
By Margaret Hartmann
Breaking History, the forthcoming memoir from the former First Son-in-Law/top Trump adviser, is brimming with dirt, jabs, and score settling.
8/5/2022
conspiracist series
conspiracist series
Sandy Hook Parents Awarded Another $45 Million of Alex Jones’s Money
By Matt Stieb
The Infowars founder has had an expensive week in court, and there are still two more trials to go against other Sandy Hook victims’ families.
8/5/2022
early and often
early and often
The Drama-Lover’s Guide to the New Trump Books
By Margaret Hartmann
Love gossip but not enough to actually read the new batch of Trump books? Here are all the juicy, disturbing, and darkly amusing tidbits you missed.
8/5/2022
the money game
the money game
Elon Musk Is ‘Sick of Stuff Like This’: 8 Takeaways to His Response to Twitter
By Kevin T. Dugan
The Tesla CEO has presented his response trying to get out of buying the company, but more questions linger over his chances of success.
8/5/2022
life after roe
life after roe
Kansas Shows the Potential Power of Pro-Choice Republican Voters
By Ed Kilgore
The Kansas abortion vote confirms that there are a significant number of pro-choice Republicans. Post Dobbs, they may get fed up with their party.
8/5/2022
inflation reduction act
inflation reduction act
Sinema’s ‘Yes’ on Budget Bill Gives Democrats New Momentum
By Ed Kilgore
After a year of angst, Manchin and Sinema have finally cut deals on the climate and economic bill. Now there are just a few final challenges.
8/5/2022
the money game
the money game
Twitter’s Legal Team Just Sucker Punched Elon Musk
By Kevin T. Dugan
The social-media platform launched a sneak attack against the guy it wants to buy the company.
8/5/2022
just asking questions
just asking questions
Will the Inflation Reduction Act Make the Carbon-Capture Business a Reality?
By Matt Stieb
A UC Irvine professor considers if the IRA’s proposed incentives could be a breakout moment for the nascent industry of sucking carbon out of the air.
8/5/2022
the inside game
the inside game
The Super-High-Stakes 2022 Race No One Is Talking About
By Gabriel Debenedetti
Charlie Crist has been Florida governor before. He thinks he can win again, toppling Ron DeSantis and sending the GOP into chaos in the process.
8/4/2022
sports
sports
Tuberville and Manchin Offer to Fix the College-Sports Money Mess
By Ed Kilgore
Federal legislation on player compensation is needed. But maybe the effort should be led by lawmakers who aren’t so closely aligned with coaches.
8/4/2022
conspiracy series
conspiracy series
The Alex Jones Trial Is As Messy As You’d Expect
By Matt Stieb
He was ordered to pay $4.1 million to a Sandy Hook victim’s parents after a trial that saw him surprised by the revelation of his own texts.
8/4/2022
2022 midterms
2022 midterms
Kris Kobach Is Making Yet Another Comeback Attempt
By Ed Kilgore
The veteran nativist and vote suppresser is running for Kansas attorney general, despite failed U.S. Senate and gubernatorial bids.
8/4/2022
power
power
Officers Involved in Breonna Taylor’s Killing Face Federal Charges
By Angelina Chapin
The four men are accused of falsifying a document, using excessive force, and creating a cover story.
8/4/2022
foreign interests
foreign interests
Brittney Griner Sentenced to 9 Years in Russian Prison
By Matt Stieb
The basketball star told the judge that she hoped the ruling “doesn’t end my life here.”
8/4/2022
early and often
early and often
2022 Midterms: A Guide to the Races Worth Watching
By Ed Kilgore
A cheat sheet to keep track of all the crucial races, primary upsets, and campaign drama — Trump-fueled and otherwise — from now through Election Day.
8/4/2022
life after roe
life after roe
Religious Liberty Is for Pro-Choice People Too
By Ed Kilgore
Pro-abortion-rights clergy are heading to court, arguing that post-Dobbs abortion bans violate their freedom to practice their religion.
8/4/2022
the money game
the money game
Why Smart-Money Investors Are Shorting Trump’s SPAC
By Michelle Celarier
“Digital World isn’t just another dubious 2021 SPAC — it is a poster child for some of the worst abuses the investment vehicle has spawned.”
8/3/2022
life after roe
life after roe
The Right to the Ballot and the Body
By Sarah Jones
Kansas shows why the anti-abortion movement has to win power by undemocratic means.
8/3/2022
early and often
early and often
5 Key Takeaways From the August 2 Primaries
By Ed Kilgore
In the Arizona, Kansas, Michigan, Missouri, and Washington primaries, Trump’s candidates did well, but there were also hopeful signs for Democrats.
8/3/2022
early and often
early and often
Shilling for Thrills
By Sarah Jones
In Lis Smith’s new memoir, principles are for purists.