Last night, a pro-choice Democrat who proudly aligned himself with a self-avowed socialist almost won the House district where Koch Industries is headquartered.

Back in November, Kansas’s fourth district backed Donald Trump by 27 points and then-GOP congressman (now CIA director) Mike Pompeo by 31. Five months later, Republican Ron Estes needed a visit from Ted Cruz, a robocall from the president, and an infusion of national money to secure a seven-point victory over the aforementioned Democrat, James Thompson, a Wichita civil-rights lawyer who has never held public office.

That 24-point swing wasn’t enough to shake the red off Kansas — but if Democrats can swing every congressional district by half that sum, they’ll take back the House in 2018.

Naturally, Republicans are eager to paint last night’s vote as an anomaly — one that says less about their party’s national liabilities than it does about its local ones. Kansas’s GOP governor Sam Brownback boasts a woeful 27 percent approval rating, thanks in large part to gaping holes in the state’s budget. Estes was Brownback’s state treasurer. In other words: Estes wasn’t just running as a member of an unpopular governor’s cabinet, but as the one most closely tied to Brownback’s biggest failure. Republicans might point out that, if anything, the fact that the treasurer of a state with wrenching budget problems won at all is a testament to the GOP’s vitality! This is fine! America is already great again!

There are a couple problems with that story. To name the most obvious: The past three months have been replete with evidence that the Democratic base is highly mobilized. You can see it in the record-setting marches, town-hall protests, massive traffic enjoyed by left-wing Facebook pages, the tight special-election race in Georgia’s sixth district, and in the $150,000 that the liberal blog Daily Kos convinced its readers to pony up for Thompson’s long-shot campaign.

But okay, let’s ignore all that. Let’s stipulate that last night was all about Brownback. That would certainly offer vulnerable House Republicans short-term comfort. But in the long run, a repudiation of Brownback is just as, if not more, threatening to the Republican Party than a repudiation of Trump would be.

Because Sam Brownback isn’t unpopular for idiosyncratic, personal reasons; the governor didn’t decimate his state’s finances by spending public funds on sex workers. He did it by implementing the conservative movement’s blueprint for utopia.

Some readers may be familiar with the legend of the “red-state model,” but for those who aren’t, here are the Cliffs Notes: The 2010 tea-party wave delivered Brownback to the Sunflower State’s governor’s mansion and Republican majorities to both houses of its legislature. Together, they passed massive tax breaks for the wealthy and repealed all income taxes on more than 100,000 businesses. They tightened welfare requirements, privatized the delivery of Medicaid, cut $200 million from the education budget, and eliminated four state agencies and 2,000 government employees. In 2012, Brownback helped replace the few remaining moderate Republicans in the legislature with conservative true-believers. The following January, after signing the largest tax cut in Kansas history, Brownback told The Wall Street Journal, “My focus is to create a red-state model that allows the Republican ticket to say, ‘See, we’ve got a different way, and it works.’”

The GOP’s national leadership agreed: Voters should look to Kansas to see the Republican vision for the nation’s future. “This is exactly the sort of thing we [Republicans] want to do here, in Washington, but can’t, at least for now,” Senate Majority Leader Mitch McConnell said of Brownback’s Kansas. And the supply-side nostrum undergirding the governor’s economic model — that massive tax cuts for the rich will pay for themselves, via heightened economic growth (provided that you kick the undeserving poor out of their welfare hammocks) — is the same one on which all of Paul Ryan’s celebrated budgets are based.

Of course, the GOP’s “different way” didn’t work. Instead of providing national Republicans with a winning advertisement for fiscal conservatism, it provided Kansas’s government with giant revenue shortfalls, its economy with weaker job growth than in neighboring states, and Brownback himself with one of the lowest approval ratings of any governor in America. For decades now, Republicans have been asking voters to trade pieces of their social safety net for stronger economic growth. Kansas took them up on it: The state government was able to throw more than 1,000 disabled Kansans off Medicaid, cut millions from the state’s university system, and, in some of its districts, shorten the K-through-12 school year.

Here is their reward.

No state economy has done worse over the last 5 years than right-wing paradise Kansas. https://t.co/rWPjwqo17r pic.twitter.com/3AYsgQHMqZ

So to say that Kansas didn’t swing against the GOP because of Trump, but, rather, because of Brownback, is to say that red America isn’t souring on one particular Republican — it’s souring on the party’s entire economic philosophy.

Last year, the Republican Party nominated a man who campaigned on a promise to deliver universal health care, preserve Social Security and Medicare, and intervene in the free market to protect American jobs. Last month, Republicans in the Kansas legislature passed a bill to expand Medicaid in their state.

President Trump has never been popular. But his approval rating began sliding in early March, right after Ryan unveiled his plan to finance a large tax cut for the rich by throwing millions of low-income people off their health insurance — an idea that enjoyed the backing of 17 percent of the electorate. 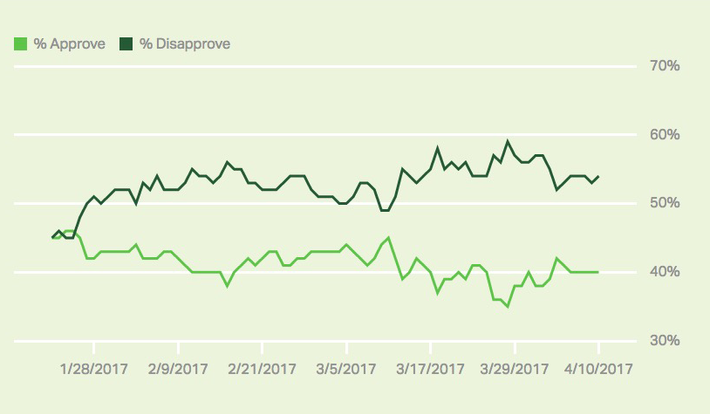 Path to Trump's base?

Trump should NOT lower taxes on the wealthy —

These are not coincidences. They are testaments to the GOP’s fundamental weakness, the one they compensate for using gerrymandered districts, voting restrictions, fraudulent promises, defamatory conspiracy theories, and increasingly garish appeals to white racial resentment: Republican voters no longer want to buy what misanthropic billionaires pay their leaders to sell them. Not even in the Koch brothers’ backyard.

THE FEED
7 mins ago
early and often
early and often
Trump Wants to Divide Republicans and Conquer DeSantis
By Ed Kilgore
Nikki Haley is no threat to Trump, who would prefer a large field to muddy the track in his real primary race against Florida‘s governor.
9:12 a.m.
what we know
what we know
Horrifying Scenes of Quake Damage From Turkey, Syria Emerge
By Chas Danner
The powerful earthquakes have flattened thousands of buildings in the region, and the death toll continues to mount.
9:00 a.m.
foreign interests
foreign interests
Trump Is Too Tough on Balloons to Be Antiwar
By Eric Levitz
The ex-president is simultaneously slamming Biden for insufficient toughness on China and casting himself as a peace candidate.

8:00 a.m.
the city politic
the city politic
Are Eric Adams’s Big Plans for the City Still Too Small?
By Errol Louis
As he enters his second year in office, Adams is sticking with his grind-it-out approach to governing.
2/6/2023
what we know
what we know
U.S. Recovery of Alleged Spy Balloon Continues: Updates
By Chas Danner
China claimed on Monday that a second similar balloon seen over Latin America last week was also just a wayward civilian craft.
2/6/2023
tremendous content
tremendous content
Don Jr. Is Ready to Laugh About the ‘Trump Baby’ Balloon
By Margaret Hartmann
While the Chinese spy balloon is no more, its cranky little brother is getting pampered by the Museum of London, giving Trump’s son a chuckle.
2/6/2023
substation attacks
substation attacks
A Pair of Nazis Allegedly Wanted to Blow Up the Baltimore Grid
By Matt Stieb
The alleged plot is part of a surge in far-right extremists looking to take out the electrical grid.
2/6/2023
ftx fallout
ftx fallout
FTX Even Had a Woo-Woo Life Coach
By Matt Stieb
Sam Bankman-Fried hired his own psychiatrist to coach staffers about “happiness” and to encourage them to go on dates.
2/6/2023
the talented mr. santos
the talented mr. santos
Here’s Every Single Lie Told by George Santos
By Matt Stieb
Navigating the many exaggerations and falsehoods of New York’s newest representative.
2/6/2023
the national interest
the national interest
Michael Lind, Case Study in the Perils of Discourse-Poisoning
By Jonathan Chait
How an intellectual talks himself into believing the GOP is the left-wing party.
2/6/2023
just asking questions
just asking questions
Should a 13-Year-Old Have Bariatric Surgery?
By Benjamin Hart
Sandra Hassink on what the new pediatric obesity guidelines she co-wrote do and don’t say.
2/6/2023
the economy
the economy
America’s Labor Shortages Are Good, Actually
By Eric Levitz
The upside of longer lines and faltering customer service.
2/5/2023
early and often
early and often
Has Pete Buttigieg’s Dream Job Turned Into a Nightmare?
By Ed Kilgore
It turns out Transportation secretary won’t be a quick and easy layover on the way to higher office for Mayor Pete.
2/4/2023
early and often
early and often
The Democrat Who Could Take Down Kyrsten Sinema
By Ben Jacobs
Ruben Gallego will try to fulfill the left’s dreams by challenging Arizona’s newly independent U.S. senator.
2/3/2023
early and often
early and often
House Republicans’ Assault-Weapon Pins Aren’t Just a Taunt
By Ed Kilgore
Owning the libs may be an added bonus, but Second Amendment absolutists clearly intend them as a threat against those who challenge gun rights.
2/3/2023
creature capers
creature capers
The Hunt Is on to Find the Dallas Zoo Bandit
By Matt Stieb
A suspect was arrested after police received a tip that the alleged bandit was visiting the aquarium.
2/3/2023
just asking questions
just asking questions
What Could a Chinese Spy Balloon Over the U.S. Do, Exactly?
By Matt Stieb
Arms-control expert Jeffrey Lewis examines whether the Chinese spy ship over the West is an accident or a geopolitical middle finger.
2/3/2023
poll position
poll position
Trump’s Lead in 2024 Polls May Be Thinner Than We Thought
By Ed Kilgore
The ex-president looks weaker against Ron DeSantis and other likely Republican rivals in the polls that were most reliable last year.
2/3/2023
tremendous content
tremendous content
Trump Knows How to End Ukraine War ‘Immediately,’ But It’s a Secret
By Margaret Hartmann
Trump revealed there’s something he could say that would “guarantee” that the fighting ends now. Sadly, he won’t tell unless we reelect him.
2/3/2023
horrible bosses
horrible bosses
Working for George Santos Is As Crazy As It Sounds
By Matt Stieb
A former aide recorded his conversation with the congressman as he was getting fired. Santos wasn’t all that nice about it.
2/3/2023
crime
crime
New Jersey Councilwoman Shot and Killed Outside Her Home
By Nia Prater
Eunice Dwumfour, a 30-year-old member of the Sayreville Borough Council, was found shot dead on Wednesday night.
2/3/2023
the economy
the economy
The Fed Can Stop Choking the Economy Now
By Eric Levitz
The statistical and moral case for easing up on the interest-rate hikes.
2/3/2023
2024 presidential election
2024 presidential election
What on Earth Are These 2024 Long Shots Thinking?
By Ed Kilgore
It’s not inconceivable that someone like Nikki Haley could become a contender. But don’t count out sheer ego as motivation.
2/3/2023
just asking questions
just asking questions
What It Takes to Give Abortion Seekers (Actually Good) Advice Online
By Irin Carmon
The Online Abortion Resource Squad’s Ariella Messing on fighting disinformation in a post-Roe world.
2/2/2023
early and often
early and often
Trump Reminds Republicans He’s Willing to Ditch the GOP
By Ed Kilgore
Even if he doesn’t formally launch a third-party bid, Trump could doom the 2024 Republican presidential nominee.