Can you imagine a more pointless use of your time than me forcing you to guess whether I really saw Reel Big Fish three times in my teens and 20s? Photo: Andrew Benge/Redferns via Getty Images

If you are an active Facebook user, then it’s likely that at some point in the last few days, a Facebook friend has posted a list of ten bands and asked you and their other friends to guess which one of the ten they haven’t seen live. This has become a popular meme, but it is bad and it needs to die. Now.

How Internet Trolls Won the 2016 Presidential Election
Harambe and Campus Outrage: A Horrific Super-Meme in the Making

This might sound like a harsh assessment for a pretty innocent meme. There are a lot of memes out there, after all, and setting aside the racist or hateful ones, few memes are bad. A lot of them are kinda meh, but bad? It’s hard for a meme to be all that bad.

But the Fake Show meme deserves — no, screams for — this designation, because it fails just about every test of what makes for interesting online content. Good memes have a fun, peppy, iterative quality to them — the more time you spend with them, the funnier and more creative and more interesting things get, at least up to the point when you’re ready to move on. You can actually lose yourself in a good meme for a few hours, if you’re so inclined. Dat Boi and Trebuchet memes deliver a level of entertainment that feels disproportionate to how simple and silly the underlying concepts are. The Fake Show meme is the opposite. It feels like an unguided swamp tour — it isn’t fun, and it gets less fun as you muck on further.

That’s because “Guess which bands I’ve seen live?” is the sort of question that can bring an otherwise excellent party to a screeching halt. To a certain approximation, with a very narrow and well-defined set of exceptions, nobody cares which bands you’ve seen live. This is very important social information that should be drilled into the head of every sixth-grader immediately before their first live show. And however little everyone cares about what bands you’ve seen live, they care even less about carefully parsing a list of bands you have seen to find the one fraudulent outlier. It’s a fundamentally boring and pointless task — a bit like seeing circa-2017 Bob Dylan — made even more so by the fact that there’s often a totally arbitrary quality to which bands one happened to have caught live in their younger, more live-show-heavy years. Oh, so you saw Elliott Smith and Modest Mouse, but you missed Built to Spill? That’s … [Ron Burgundy broken-teleprompter voice] interesting?

Perhaps the meme’s only saving grace is that it can be judo-moved against itself to broadcast its own fundamental pointlessness, as a Facebook friend of mine expertly did: 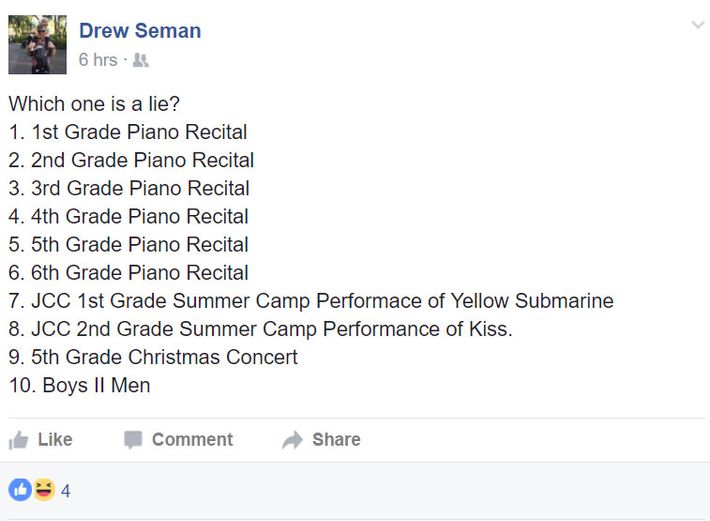 +Comments Leave a Comment
The ‘Which Band Did I Not See?’ Meme Is Bad and Should Die