“I want to be unpredictable.” Photo: Mark Wilson/Getty Images

To make health care more affordable for low-income Americans, the Affordable Care Act provided insurers with “cost-sharing reductions” — federal payments that defray the cost of deductibles and copays for more than 7 million Americans.

That was the Obama administration’s plan at least. House Republicans, however, claimed that the law didn’t actually authorize the executive branch to make those payments without an additional congressional appropriation. A federal judge agreed, but that judge also ruled that the administration could carry on making the payments while it appealed the decision to a higher court.

This has left a cloud of uncertainty over the American health-care system. But it’s a cloud that Congress could easily scatter — all it has to do is pass an appropriation for those cost-sharing reductions. Republicans put off that task while they were trying to pass Trumpcare. But now that Obamacare is “the law of the land,” it’s in everyone’s interest to stabilize the marketplaces and ensure that working-class Americans don’t see their premiums suddenly skyrocket when and if the government’s appeal fails.

Or so health insurers thought. Last week, President Trump told The Wall Street Journal that he was considering withholding those payments, in order to force Democrats to play ball on Obamacare repeal. Specifically, Trump suggested that once he deliberately undermines America’s insurance markets and people start losing their coverage, then Democrats will be desperate to vote for his health-care plan — because everyone will blame Democrats for what he did.

“I don’t want people to get hurt,” Trump told the paper. “What I think should happen — and will happen — is the Democrats will start calling me and negotiating. … They own Obamacare.”

These remarks made insurers nervous. And on Tuesday, executives from several of America’s leading health-insurance companies came to Washington to meet with Seema Verma, the administrator of the Centers for Medicare and Medicaid Services. At that meeting, they sought reassurance that the administration would continue to provide cost-sharing reductions next year. They received none.

That could have ominous implications for the stability of Obamacare, as the Washington Post reports:

Insurers weighing whether to participate in the Affordable Care Act marketplaces next year have said that if the funds aren’t going to be available, they will have to decide whether to leave the marketplaces altogether or hike premiums by at least 15 percent, on average …Verma urged chief executives to lobby Congress directly, according to the industry officials, who requested anonymity in order to speak frankly.

Trump is (almost certainly) badly mistaken if he believes that his party will benefit from premiums soaring just before the 2018 midterms. Voters pretty much always blame the president’s party for bad things that happen while they control the White House. Plus, Trump has publicly touted plans to sabotage Obamacare and then blame the Democrats. Polls suggest that ploy will fool no one (save the most ardent Trumpists). 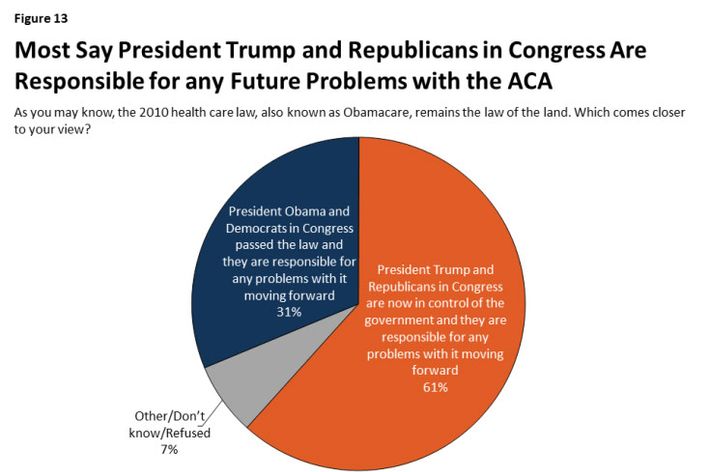 If the administration really does cut off cost-sharing reductions, 2018 could be a very bad year for the American health-care system — but a very good one for the Democratic Party.