Owen Ellickson, a writer and producer whose credits include The Office, Superstore, and Other Space, spent much of the presidential campaign tweeting revealingly false missives from inside Trumpland. Now, he has acquired a trove of leaked documents from inside the Trump White House, which Daily Intelligencer will publish over time as a series. We caution you that these documents are, as yet, unverified. The latest: A Sebastian Gorka rant, written out on a McDonald’s napkin. 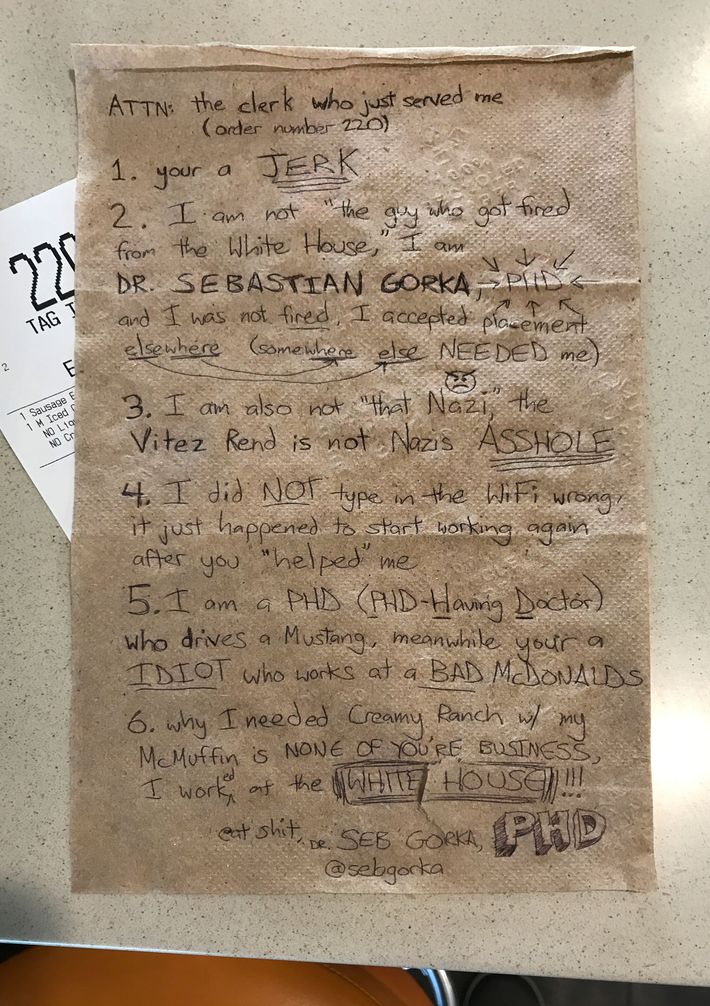 THE FEED
23 mins ago
exhibit a
exhibit a
The Trump Organization Is Convicted on All Counts in Criminal Trial
By Ankush Khardori
The defense strategy of blaming CFO Allen Weisselberg for the company’s own tax fraud made no sense.
3:39 p.m.
the money game
the money game
5 Takeaways From Three Arrows Capital’s New York Bankruptcy Hearing
By Jen Wieczner
Su Zhu and Kyle Davies are surfing and painting in exile. Also dodging creditors and the law.
2:52 p.m.
politics
politics
Brian Sicknick’s Family Snubs Mitch McConnell and Kevin McCarthy
By Nia Prater
Family members of a police officer who died following the attack on the Capitol refused to shake hands with Republican leaders at a medal ceremony .

1:05 p.m.
poll position
poll position
What the Polls Say Today: It’s Warnock’s Race to Lose
By Ed Kilgore
Even polls that showed Herschel Walker leading in November now show Raphael Warnock slightly ahead.
12:13 p.m.
whodunnit
whodunnit
Somebody Shot Up a Power Station in North Carolina
By Matt Stieb
The identity and motives of the culprits remain a mystery as thousands struggle without electricity.
9:31 a.m.
just asking questions
just asking questions
How Frighteningly Strong Meth Has Supercharged Homelessness
By Benjamin Hart
Journalist Sam Quinones on the radically transformed picture of drug addiction in America.
8:10 a.m.
conservatism
conservatism
Why the GOP Will Lose Its War on ‘Woke Wall Street’
By Eric Levitz
Republicans can’t accept that they dislike modern capitalism, so they’re blaming “ESG” instead.
12/5/2022
volcanoes
volcanoes
Volcanoes Are So Hot Right Now
By Chas Danner
There have been some stunning eruptions at volcanoes on multiple continents in the past few days. No, the world isn’t ending.
12/5/2022
early and often
early and often
Yes, Republicans Still Pose a Threat to Democracy
By Ed Kilgore
The 2022 results do not show that the GOP has given up on ruling without majority support whenever it can or must.
12/5/2022
the future is now
the future is now
That AI Chatbot Wrote a Pretty Decent New York Article
By Intelligencer Staff
Is this the end of journalism as we know it?
12/5/2022
tremendous content
tremendous content
Donald Trump Cost Lara Trump Her Fox News Gig
By Margaret Hartmann
Nepotism giveth, and nepotism taketh away.
12/5/2022
the money game
the money game
Could Caroline Ellison Be Cutting a Deal With the Justice Department?
By Kevin T. Dugan
The former CEO of Alameda Research and Sam Bankman-Fried’s ex-girlfriend might have been spotted in Manhattan.
12/5/2022
early and often
early and often
Pandemic Politics Hold Up Gazillion-Dollar Defense Bill
By Ed Kilgore
For 61 years, the two parties have agreed on an annual defense-policy bill. It could fail this year as Republicans bend to their anti-vaxx base.
12/5/2022
tremendous content
tremendous content
The Donald Trump–Elon Musk Feud: A Complete History
By Margaret Hartmann
After reinstating Trump’s Twitter account, Musk sided with the U.S. Constitution over the ex-president. Here’s the latest on their chaotic saga.
12/5/2022
early and often
early and often
Trump Admits the U.S. Constitution Is Against Him
By Chas Danner
The former president wants to terminate the parts that prevent him from overturning his 2020 election loss.
12/5/2022
'i can do my time'
'i can do my time'
Why Was Eric Adams Really in Qatar?
By Matt Stieb
The mayor went to some World Cup matches, met investors, and didn’t appear to say much about the tournament’s alleged abuses.
12/5/2022
reasons to love new york
reasons to love new york
The Story of the Bishop Robbed During His Church Service
By Simon van Zuylen-Wood
It’s so much wilder than the headlines.
12/5/2022
reasons to love new york
reasons to love new york
This Awkward Office Limbo Might Be Remembered As a Golden Era
By Matt Stieb
Let’s enjoy this moment while we have it.
12/5/2022
the system
the system
Herschel Walker Is the Last Republican Standing
By Zak Cheney-Rice
His runoff campaign goes all in on Trumpism.
12/4/2022
vision 2024
vision 2024
Joe Biden’s Actually Not-at-All-Bad Year
By Ed Kilgore
2022 could have gone so much worse for Biden. 2024 — and all the steps he must take to show he’s still electable — looms next.
12/3/2022
games
games
The U.S. Team Can Hold Their Heads High
By Will Leitch
Losing to the Netherlands was deeply frustrating, but the Americans’ best days are ahead of them.
12/3/2022
screen time
screen time
The Machine Will Speak With You Now
By John Herrman
DALL-E’s fun, impressive, and somewhat unsettling chatbot sibling is open to the public.
12/3/2022
early and often
early and often
Why Democrats Upended Their Primary Calendar
By Ed Kilgore
The old Iowa–New Hampshire duopoly is history.
12/3/2022
encounter
encounter
Roger Bennett Is U.S. Soccer’s Biggest Fan
By Matt Stieb
He may speak with an English accent, but he has distinctly American ingenuity.
12/2/2022
games
games
The U.S. Can Absolutely Beat the Netherlands on Saturday
By Will Leitch
Your guide to this weekend’s very big, very winnable game.