The kids are all left. Photo: Zach Gibson/Getty Images

The president of the United States has called for the abolition of legal abortion. His second-in-command opposes sex-same marriage, stem-cell research and any limitation on the right of employers to fire people for being gay. And in state houses all across America, the people’s elected representatives are pushing new restrictions on reproductive rights.

On Thursday, Gallup released a new poll on our nation’s moral sentiments. It reveals that Americans have never been as socially liberal in their attitudes as they are today: On the 19 “moral” issues in Gallup’s survey, Americans are now more left-wing than they’ve ever been on 10 — and have moved significantly in the conservative direction on none. 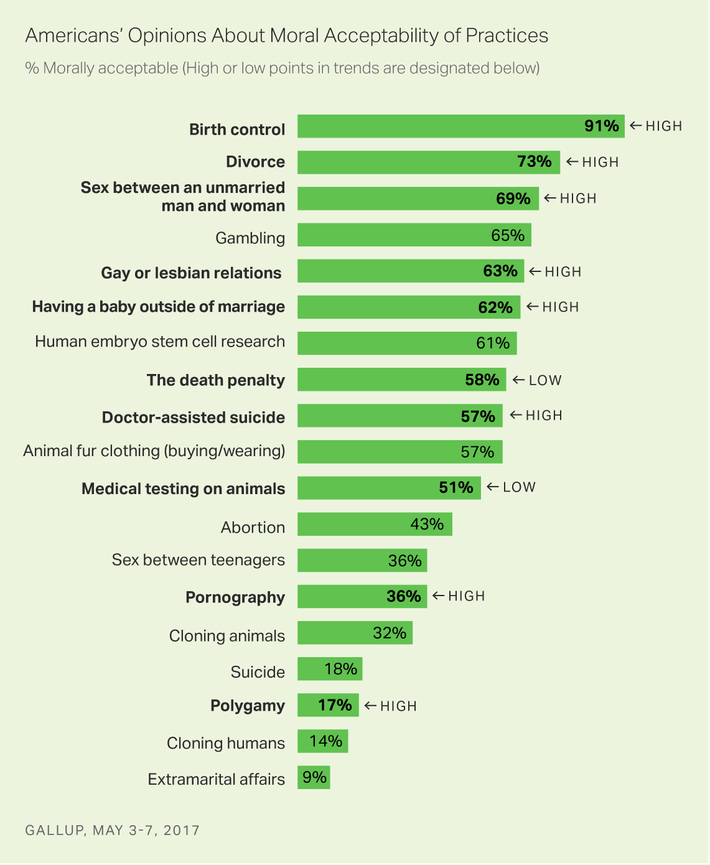 To be sure, the pro-human-cloning movement still has its work cut out for it. And all of this years’ new highs are just one or two points above records set in 2015 and 2014 — which is to say, we aren’t seeing a significant acceleration in America’s descent into Satanism, just continuous movement in that direction.

Still, the new records offer an opportunity to reflect on the significant changes in America’s moral sensibilities since the turn of the century. Since the early 2000s, the public’s views on sex and marriage have changed drastically, as the percentage of Americans who say gay relations, conceiving a child outside of wedlock, extramarital sex, and divorce are morally acceptable have all increased by double digits.

These shifts have been powered by the growing liberalism of America’s elderly — itself a product of the success of social movements and, well, father time thinning the ranks of more conservative generations. By contrast, America’s growing intolerance for cruelty to animals is driven by the sensitivities of those under 50.

So: Why don’t our state and federal governments affirm the ascendency of American social liberalism? One answer, of course, is that they actually do. Gay marriage is legal in all 50 states; your employer-provided health care must cover birth control (for now); blue states are steadily expanding employment and civil-rights protections for gays, lesbians, and the gender nonconforming; pornography remains legal (despite the ongoing moral opposition of a majority of Americans); and even with full control of the federal government, Republicans still can’t seem to defund Planned Parenthood.

Nonetheless, it remains the case that America’s dominant political party boasts a radically reactionary platform on social issues that is increasingly out of step with majoritarian moral sentiment.

This fact is, in large part, a product of our nation’s abysmal turnout rate. In a country where only 60 percent of the electorate shows up for general elections, well-organized communities and institutions can punch above their weight at the ballot box. And white evangelicals are very well-organized: In many of last year’s swing states, such Christians accounted for a fifth of the voting public — and cast their ballots in a block for Republican candidates.

America’s libertines simply don’t vote as reliably as its promise-ring enthusiasts. And this has allowed our government to slouch back towards theocracy, even as the American people have made excellent headway down the road to perdition.

+Comments Leave a Comment
Gallup: America Is More Socially Liberal Than It’s Ever Been