Paul Ryan’s tweets are bad, and we have the numbers to prove it. Photo: Win McNamee/Getty Images

There are many ways to gauge a tweet’s performance on Twitter. Maybe you’re hoping that it gets a lot of likes. Maybe you’re hoping that a famous person acknowledges your tweet. Maybe all you care about is that it makes you laugh. But for people looking for more advanced and nuanced measurements of Twitter performance, there is only one important figure: “The Ratio.”

The ratio, explicated earlier this year by Luke O’Neil at Esquire, works like this: If you tweet something good, people will retweet or “like” it, as a sign of agreement or endorsement. If you tweet something bad, people will reply to it, usually angrily. The ratio between replies and retweets, then, can tell you if you did a good tweet, or a bad one. For example, this charmer from New York congressman John Faso supporting the AHCA. Faso, at the time, had just over 2,000 Twitter followers. His bad tweet has since racked up 4,000 replies to just 119 faves. This, friends, isn’t a good ratio.

Like sabermetricians revolutionizing baseball statistics in the 1990s, Mike Williams and Sepand Ansari over at Fast Forward Labs scraped Twitter data to discover the ratio for several Twitter accounts, by writing code — Twitter’s API doesn’t track reply counts — that looked at tweets from seven different accounts, from January 2016 to now, that received over 50 replies.

Among the seven accounts selected — six politicians and one @dril — the loser was clear: Paul Ryan. (You can play around with the data on Fast Forward Labs’ site here.) 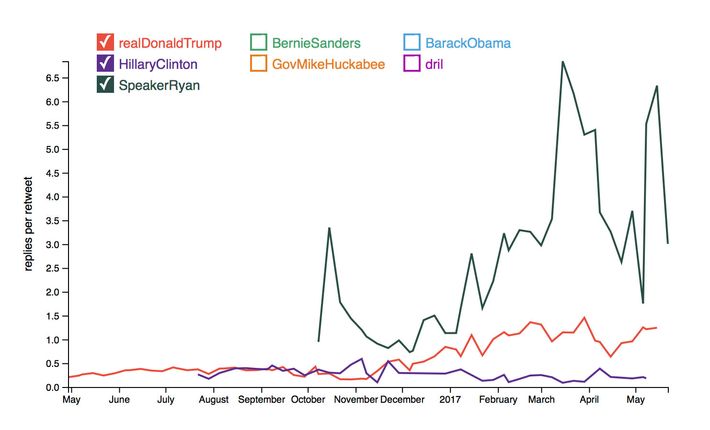 Trump’s ratios have steadily gotten worse since assuming office, but nothing like Ryan’s, which reached unprecedented proportions during the debate over AHCA. Ryan’s worst tweet — like Faso’s bad tweet, this one was also promoting Trumpcare — saw over 8,000 replies to just 300 retweets.

Much like Paul Ryan’s, Donald Trump’s Twitter ratio has also declined since he was inaugurated — but it’s not as bad, likely thanks to his visibility and the willingness of people (and bots) to RT the president in any circumstance. The tweet with the worst ratio — a not-so-humble brag about winning the election, paired with a complaint that people still want to see his tax returns — has 54,000 replies, compared to only 12,000 retweets. (It does, however, have 71,000 faves.) Shockingly, Trump’s 2016 Cinco de Mayo tweet, featuring that infamous picture of him eating a taco bowl, doesn’t even crack his top five worst tweets, judged by ratio.

I did what was an almost an impossible thing to do for a Republican-easily won the Electoral College! Now Tax Returns are brought up again?

But who should politicians attempt to emulate? On the other end of the spectrum, famed Twitter personality @dril’s ratio is just about perfect. Dril has a consistently low number of responses to all of their tweets; their “worst” tweet — 575 replies to 693 retweets — doesn’t even really count, since it was, in fact, a request for reply tweets. (@dril declared that none of the replies were good.)

folks.. reply to this message with your Finest tweet, and i just might drop it a Like... my way of "Giving back" to the community... Thank u 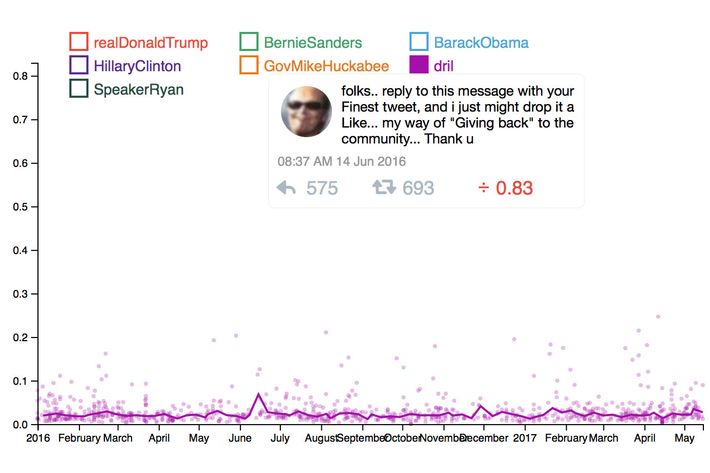