Mick Mulvaney: I was told there would be no math. Photo: Chip Somodevilla/Getty Images

Yesterday, the Trump administration published a federal budget plan that hinged upon an embarrassing math error. It assumed that $2 trillion of revenue, which it had already committed to pay for the cost of its tax-cut plan, would appear again, to help balance the budget. Trump’s budget officials have tried to explain that this was not an error at all but a cunning plan. Their explanation is complete nonsense.

Budget Director Mick Mulvaney told reporters that his plan assumes the Trump tax cuts would be revenue neutral — which is to say, for every dollar of lost revenue through lower rates, it would produce another dollar of higher revenue through reduced tax deductions or loopholes. And then the revenue-neutral plan would produce so much growth that overall revenue would rise:

We stand by the numbers. We thought that the assumption that the tax reform would be deficit-neutral was the most reasonable of the three options that we had. We could either assume that our tax reform was deficit-neutral. We could assume it would reduce the deficit. We would assume it would add to the deficit. And given the fact that we’re this early in the process about dealing with tax reform, we thought that assuming that middle road was the best way to do it.

An OMB official gave the same explanation to Politico’s Michael Grunwald: “A senior OMB official told me the double-counting accusations are wrong, because the budget assumes tax reform will be deficit-neutral without taking growth into account.”

In theory, with a bunch of absurdly optimistic assumptions, it might be possible to imagine a tax reform plan that replaced every dollar of cuts with a dollar of savings, and produced enough growth to increase revenue by $2 trillion. But that has never been Trump’s tax plan. The plan, as Trump’s officials have described it, would lose revenue on a dollar-for-dollar basis. They have insisted that the apparent revenue loss would be compensated for by higher growth. The savings from the predicted growth effects would be counted against the cost of the tax cut itself. They have never said they would support a tax-cut plan designed to increase revenue, let alone one that would yield $2 trillion in higher revenue.

Trump’s budget imagines a tax-cut plan completely at odds with what Trump has endorsed. For instance, as Binyamin Applebaum points out, Trump has pledged to abolish the estate tax. I have not seen any analysis that reports or assumes that the final proposal will do anything to the estate tax except eliminate it. This is a policy of absolute unanimity within the Republican Party.

But look at page 27 of Trump’s budget. There it is — the estate tax, still alive and producing $328 billion in revenue over the next decade: 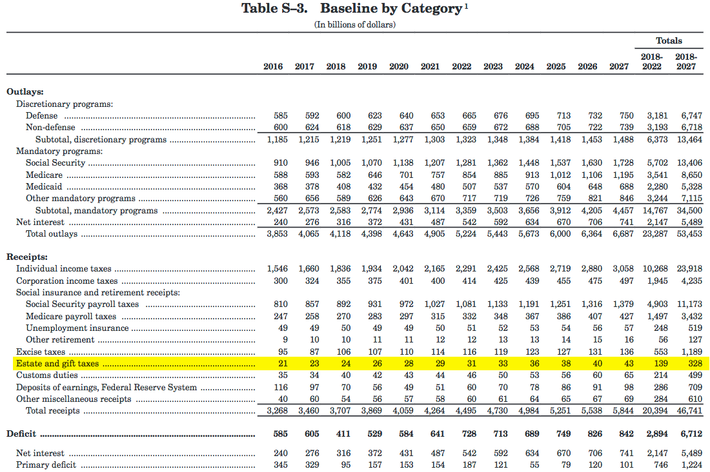 So no, these are not some “reasonable” set of assumptions. This is Trump’s budget director making a gross double-counting mistake and pretending it didn’t happen.