In 2010, when Utah-based artist Jon McNaughton produced an original painting showing President Obama trampling the Constitution, he could have never anticipated just how much he’d support the next president. At the time, Donald Trump hadn’t even started his racist birther campaign.

Fast forward six years, and Trump, on his first day as president-elect, was echoing the message of McNaughton’s painting, entitled “The Forgotten Man.”

Such a beautiful and important evening! The forgotten man and woman will never be forgotten again. We will all come together as never before

Now, six months later, after the tumultuous beginning to Trump’s presidency, he’s at risk of losing McNaughton’s support, along with that of some of his other strongest supporters.

“I don’t like America intervening in other countries’ business. That bothers me,” McNaughton told Task and Purpose, pointing out his opposition to Trump’s Syria strikes. The artist, whose work includes a painting of Obama golfing as nukes go off, added that Trump has “kind of backpedaled on things that he said during election process, which is disconcerting.”

McNaughton is not the only high-profile Trump supporter publicly expressing doubts about the president. Ann Coulter, who published a book called In Trump We Trust months before he was elected, recently told the Daily Caller that she’s “not very happy with what has happened so far.”

Coulter isn’t quite ready to renounce her support for Trump, but she says “all of the Trump true believers are petrified,” herself included.

Last week, Quinnipiac University released a poll that showed just how poorly Trump is doing among his biggest boosters. It showed eroded support among white men, white voters without college degrees, and independents — or the people most likely to have this poster on their wall. 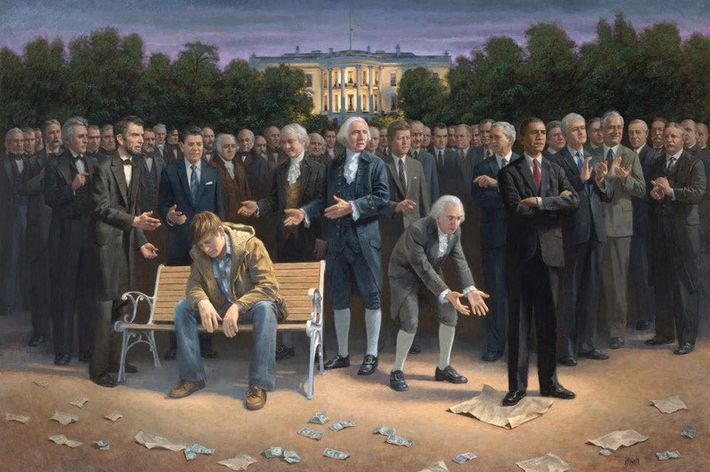