Safe is the new sexy.

Apple knows that every time your phone buzzes — whether it’s a notification for a new Tinder match, or a call from work — you’re probably going to check it, even if you’re driving. And it seems to be just as worried as that friend sitting in your passenger seat, nervously glancing over at you every time you assure them you’ve “totally got this,” while answering a text message as you weave through traffic. However, unlike someone in your passenger seat, Apple’s response to this issue isn’t passive-aggressively asking you if there’s “anyone they can text for you,” but instead, it’s the creation of a new, oh-so-creatively named setting called “Do Not Disturb While Driving.”

Unlike the traditional do-not-disturb mode, DNDWD shuts your phone off to all incoming messages while you’re in a moving car, turning the lock screen completely black when the setting is engaged. It determines when you’re in motion based on a complicated system of measurements using the iPhone’s built-in Wi-Fi and Bluetooth settings, which ensures that even users without the latest phone-pairing-capable car will be able to make use of the feature.

If someone tries to text you while DNDWD mode is turned on, they will automatically receive two texts back. The first is a response that says, “I’m driving with Do Not Disturb turned on. I’ll see your message when I get where I’m going.” And the second says, “If this is urgent, reply ‘urgent’ to send a notification through with your original message.” 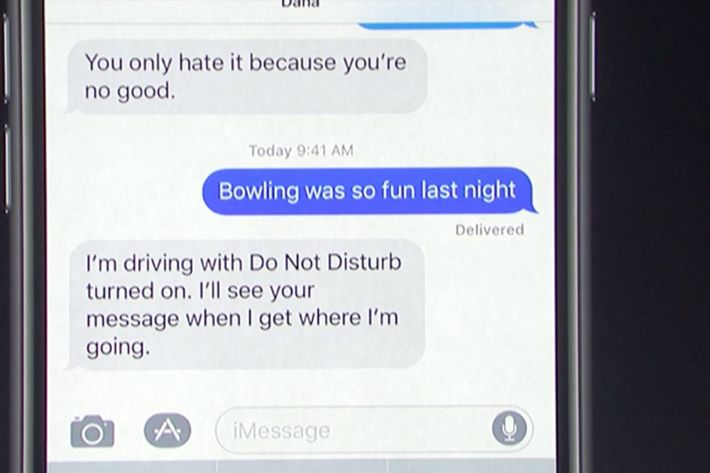 While it’s probably necessary for Apple to include a bypass feature — you can just imagine all of the “Oh, sorry I ignored your totally important message. Apple was trying to keep me from texting and driving!”–type scenarios the company is trying to avoid — it does seem a little counterintuitive. If its goal is to stop the distractions that notifications bring to the driving experience entirely, giving users such an easy out certainly weakens that.

Other features within the setting make bypassing the DNDWD lock even easier. Users can unlock their device and reengage notifications when they’re on the go by force-clicking a button on the lock screen and selecting the “I’m Not Driving” option. This feature was pitched as a way to allow users who are in a car, but not driving it, to use their devices, but it could easily double as a work-around for the safety-feature settings for those who are behind the wheel.

But even if you can click your way out of DNDWD mode, its existence on the phone at all is likely going to help stop iPhone use in the driver’s seat. People who want to text and drive (or even Snapchat and drive) are always going to find a work-around to current safety features in order to do so, but the well-intentioned and easily distracted will welcome a setting that helps prevent their worst impulses.

“Do Not Disturb While Driving” mode will be available for all iOS 11 users, following the operating system’s release. After their first ride in a moving vehicle with their updated device, users will be asked if they would like to turn on the feature, which would then automatically engage during all future trips. But for iPhone users who are worried that their days of endangering their own lives (and those around them) every time they live-tweet their commute are over, rest easy — DNDWD mode can be disengaged through settings at anytime.