A before-and-after comparison of the Google News home page.

Google News now looks a lot more like the rest of Google. The site, officially launched more than a decade ago, had long lagged behind many other parts of Google in adopting its “Material” design standards (it’s last major redesign was in 2010). As you can see in the image above from a blog post announcing the change, the Google News page was looking decidedly cramped compared to its new look.

The site will also expand its use of tagging stories with notes like “Highly Cited,” “Opinion,” or “In-Depth.” It will have a new breakout tab, “Local,” which will show you news only about a specific region or area you’re interested in. And it’ll more prominently feature fact-checking, including a right-hand rail dedicated to fact-checking articles, including this vitally important bit of investigative journalism:

For publishers, at first glance, it looks like it would mean a slight dip in traffic from Google News — all that extra white space means fewer headlines near the top of Google News, meaning fewer winners (but those winners will end up getting more traffic). But, judging from traffic patterns I’ve seen here at New York and other publications where I’ve worked, while the Google News stand-alone site has a small but dedicated set of readers, publishers don’t see large traffic spikes unless they happen to have a story that makes it into the “Top Stories” section of natural search results. These sites, for instance, are probably seeing traffic bumps from people interested in the Google News redesign: 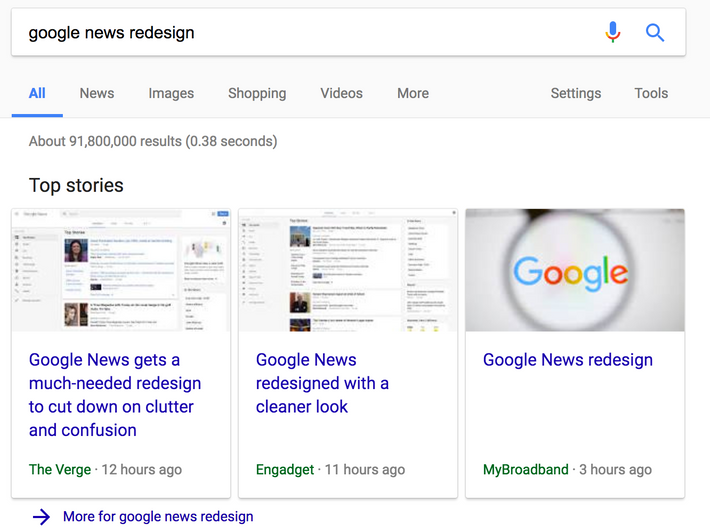 In reality, while news.google.com getting a makeover, focusing more on fact-checking, and helping readers customize what headlines they see will make for a better Google News experience, the audience for the digital newspaper front page Google News aspires to be is, and will remain, small. In the same way that home pages declined as a traffic source for publishers, the idea of Google News seems almost antiquated, even if the redesign makes it look much more modern. Publishers that focus on breaking news still see steady traffic from Google News — it’s just that they only see it when they happen to be one of the top results. People increasingly don’t see the need to have their news curated, whether by a human or an algorithm. If they’re interested in something, they’ll search it out — or just see it on a friend’s timeline.

But the service that Google News provides for most users — seeing few selected Top Stories from a natural Google search — remains vital to the company. If I want to find out why Phil Jackson got canned from the Knicks, I’m much more likely to hit the search box in my browser and type “Phil Jackson fired” than I am to head to news.google.com. And considering that Google is basically a display-advertising company that happens to do a lot of other things, and its search-results page can demand some of the higher rates on the web, Mountain View probably prefers it that way.

+Comments Leave a Comment
Google News Gets a Redesign, But Is It Still Relevant?

THE FEED
21 mins ago
what we know
what we know
Memphis Police Release Horrific Video of Tyre Nichols’s Beating: Updates
By Chas Danner
The footage shows police officers repeatedly striking Nichols, then not rendering aid afterward.
6:46 p.m.
early and often
early and often
Republicans Want Surrender, Not a Deal, on the Debt Ceiling
By Ed Kilgore
There can be no “bipartisan” solution to the debt-ceiling crisis when one party refuses to talk about the revenue side of the ledger.
5:14 p.m.
the talented mr. santos
the talented mr. santos
George Santos Commemorates Holocaust After Lying About It
By Nia Prater
The U.S. representative, who doesn’t actually have Jewish heritage but may have made antisemitic remarks, gave a speech on Holocaust Remembrance Day.