The Republican Party’s domination of America’s state and federal governments is, in no small part, the product of barriers to majority rule. Last fall, the Electoral College awarded Donald Trump the presidency, despite Hillary Clinton garnering nearly 3 million more votes. In the House elections, gerrymandering likely provided Republicans with 22 more seats than they’d have otherwise won, nearly enough to flip the balance of power in the lower chamber. And the design of the Senate, which gives disproportionate power to rural, low-population, conservative-leaning states, provides the GOP a major structural advantage.

And then, of course, there are America’s myriad forms of voter suppression: Felon disenfranchisement laws that have removed 6 million disproportionately nonwhite, left-leaning voters from the electorate; voter ID laws that make casting a ballot more arduous for the poor; a dearth of polling places in predominately minority communities that force nonwhite voters to wait in line twice as long as other Americans; and the simple fact that we hold our elections on Tuesdays, when working people have little free time to make their voices heard.

The modern GOP’s grip on federal power depends on these limitations to democracy. There are more Democrats than Republicans in this country; liberal policies (especially on economics) are more popular than conservative ones; and both those facts are poised to grow more true in the years to come. It’s true that Democrats grew overconfident about their demographic destiny; but it’s also true that Democrats have won the popular vote in six of the last seven national elections, with their only loss coming against an incumbent governing in wartime.

Republican elected officials are well aware that democracy is not their friend. That’s why GOP governors have made passing voting restrictions a top priority in states across the country, while each of the last two Republican administrations have searched high and low for evidence of a (nonexistent) voter-fraud crisis that might justify federal measures to shrink the electorate.

A new Pew poll suggests that Republican voters have come to take a similarly skeptical attitude toward democracy. 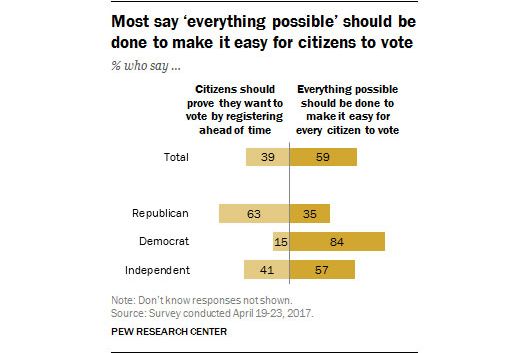 Pew’s survey question is a bit odd: It provides voters with a binary choice between, ostensibly, outlawing same-day registration and, say, cutting the Pentagon’s budget in half to invest hundreds of billions of dollars into new voting machines (“everything possible” could be interpreted to cover an awful lot of things).

Nonetheless, it’s remarkable that 63 percent of Republicans were attracted to the first option, especially given its incoherent phrasing — what does it mean to “prove” that you “want” to vote? Is there really any doubt about whether a person who shows up to a polling place on Election Day wants to vote, regardless of their registration status? The survey appears scripted to solicit an expression of hostility toward the idea of a certain kind of citizen having access to the ballot.

For some strange reason, African-Americans don’t appear to see much appeal in that sentiment. By a margin of 79 to 19 percent, such respondents agreed that the government has a responsibility to make it easy for citizens to vote. By contrast, only 54 percent of whites say the same.

If we are to safeguard our democracy against the reactionary billionaires who are working to subvert it, we’re probably going to need more white people to get enthusiastic about expanding access to the ballot.