The Democracy Fund Voter Study Group has a new survey of the electorate that explodes many of the myths that we believe about American politics. Lee Drutman has a fascinating report delving into the data. I want to highlight a few of the most interesting conclusions in the survey.

1. The Democratic Party is not really divided on economics.
You think the Bernie Sanders movement was about socialism? Not really. Sanders voters have the same beliefs about economic equality and government intervention as Hillary Clinton supporters. On the importance of Social Security and Medicare, Sanders voters actually have more conservative views:

Where they mainly differ is on international trade and the question of whether politics is a rigged game. The ideological content of Sanders’s platform is not what drew voters. It was, instead, his counter-positioning to Clinton as a clean, uncorrupted outsider.

2. Fiscal conservative–social liberals are overrepresented.
The study breaks down the beliefs of voters in both parties by income. The parties tend to cohere pretty tightly — rich Republicans are much closer to poor Republicans than either is to the Democrats; and rich Democrats and poor Democrats share more in common than either does with Republicans.

Still, there are important differences. The richest members of both parties have more economically conservative and socially liberal views than the poorest members. That gives them disproportionate influence over their agendas and priorities.

3. Libertarians don’t exist.
Well, obviously, they exist — just not in any remotely large enough numbers to form a constituency. It’s not just hard-core libertarians who are absent. Even vaguely libertarian-ish voters are functionally nonexistent. 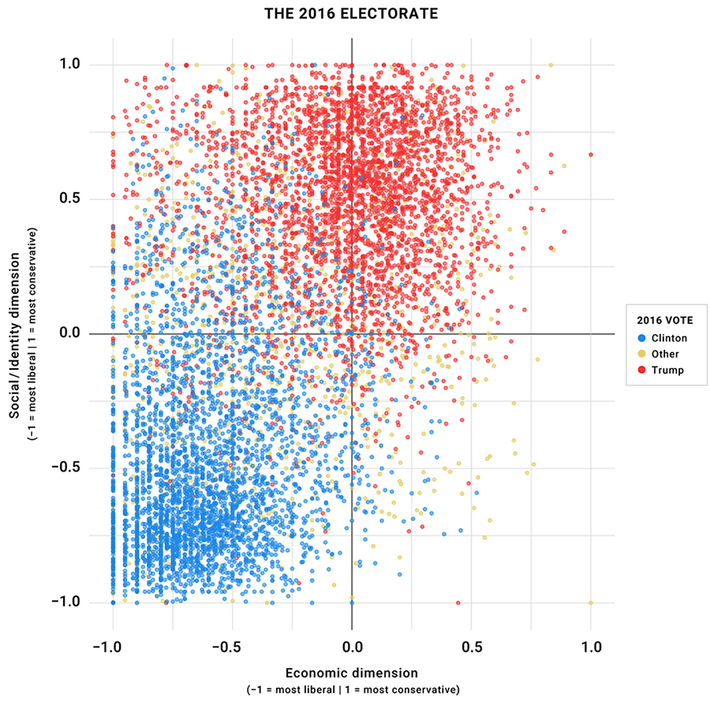 The libertarian movement has a lot of money and hard-core activist and intellectual support, which allows it to punch way above its weight. Libertarian organs like Reason regularly churn out polemics and studies designed to show that libertarianism is a huge new trend and the wave of the future. Sometimes, mainstream news organizations buy what they’re selling. But the truth is that the underrepresented cohort in American politics is the opposite of libertarians: people with right-wing social views who support big government on the economy.

4. Trump won by dominating with populists.
Republicans always need to do reasonably well with populists, which is why there’s always a tension between the pro-government leanings of a large number of their voters and the anti-government tilt of the party agenda. The key to Trump’s success was to win more populists than Mitt Romney had managed. The issues where 2012 Obama voters who defected to Trump diverge from the ones who stayed and voted for Clinton are overwhelmingly related to race and identity.

As Drutman notes, “Among populists who voted for Obama, Clinton did terribly. She held onto only 6 in 10 of these voters (59 percent). Trump picked up 27 percent of these voters, and the remaining 14 percent didn’t vote for either major party candidate.” What makes this result fascinating is that, in 2008, Clinton had positioned herself as the candidate of the white working class and she dominated the white socially conservative wing of her party. But she lost that identity so thoroughly that she couldn’t even replicate the performance of a president who had become synonymous with elite social liberalism.

Every election is different. But to the extent that 2016 has an ideological lesson for Democrats, it is that the subject the party is currently debating within itself — whether or how far left to move on economics — is irrelevant to its electoral predicament. The issue space where Clinton lost voters who had supported Obama was in the array of social-identity questions, revolving around patriotism and identity.

They may not need to solve this problem — Trump’s failures may well solve it for them. And to some extent, moral commitments to social justice may preclude the party from moving to the center on some or all of their social policies. But to the extent Democrats want to optimize their party profile to make Trump a one-term president, the social issues are where they need to focus.