Donald Trump’s election has been bad for a lot of people.

Undocumented immigrants have been subjected to a heightened risk of deportation; Medicaid recipients have seen their access to health care come under attack; feminists have had to stomach the sight of a self-avowed sex offender occupying our nation’s highest office; nonwhite children have been bullied more than they used to be; civilians have been slaughtered by American munitions in Iraq and Syria in much higher numbers; and humanity, as a whole, has seen its prospects for averting catastrophic climate change take a turn for the worse.

But, hey: Elections have winners and losers — and at least the Fox News grandpas, Duck Dynasty DVD-box-set owners, social Darwinist socialites, and literal white supremacists who make up the Republican base are feeling less alienated by, and more satisfied with, the direction their country is moving in.

Or, at least, they were feeling that way, for a little while there. A new Gallup survey finds that GOP voters’ satisfaction with the direction America is moving in has fallen sharply over the last month. In early May, shortly after the House passed a bill to throw millions of poor people off their health insurance for the sake of increasing income inequality, 58 percent of Republicans told the pollster they felt good about the way things were going.

In early June, shortly after an extremely tall cop told the Senate that the president is a creepy liar who doesn’t respect the independence of federal law enforcement, just 41 percent said the same. 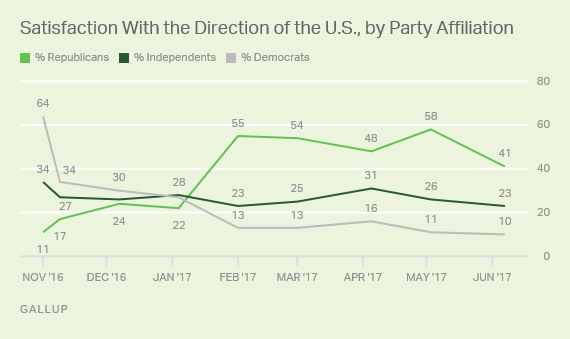 Meanwhile, Democrats remain nearly universally dissatisfied. For Team Blue, that discontent appears to be translating into political mobilization, with Democrats outperforming expectations in a series of special elections.

But Republican dissatisfaction is likely to be rooted less in their party’s lack of political power, than frustration with how the Trump presidency is unfolding. And that’s the kind of discontent that makes GOP operatives sweat.

Now, the fact that Republican satisfaction reached a peak last month suggests the current dip is largely a product of the metastasizing Russia scandal (as opposed to disappointment with Trump’s right-wing turn on economics or his increasingly undeniable incompetence). Which is to say: A healthy portion of these voters likely blame the “deep state” and “fake news media” for their dissatisfaction, not the commander-in-chief.

That said, a good number do seem to be souring on the president himself. As Nate Silver writes:

There’s been a considerable decline in the number of Americans who strongly approve of Trump, from a peak of around 30 percent in February to just 21 or 22 percent of the electorate now. (The decline in Trump’s strong approval ratings is larger than the overall decline in his approval ratings, in fact.) Far from having unconditional love from his base, Trump has already lost almost a third of his strong support. And voters who strongly disapprove of Trump outnumber those who strongly approve of him by about a 2-to-1 ratio, which could presage an “enthusiasm gap” that works against Trump at the midterms. The data suggests, in particular, that the GOP’s initial attempt (and failure) in March to pass its unpopular health care bill may have cost Trump with his core supporters.

That last point could prove significant. Remember: Republicans’ satisfaction hit an all-time high right after the passage of that unpopular health-care bill in May. Liberals have hoped that fear of a big blue wave might prevent GOP lawmakers from repealing Obamacare. But in truth, the growing enthusiasm gap may actually make moderate Republicans feel even more pressure to bite the bullet, and vote for far-right legislation.

As the Washington Post reported in the wake of last month’s House vote:

As GOP leaders scrambled to bring the last holdouts aboard in recent days, they made the argument that the liberal base is already on fire, anxious to take back control of the House in next year’s midterm elections. That means Republicans could ill afford to fall short on their health-care promise and risk depressing their own turnout.

The Republican Party’s electoral prospects are collapsing — and they may bring our health-care system down with them.

+Comments Leave a Comment
The Trump Era Is Starting to Depress Republicans, Too