America is alone. That’s the message plastered on front pages around the globe. Some headlines rage at Trump, depicting the president as turning his back on the world, on humanity. Others seem like lamentations: a good-bye to the United States as it abdicates its leadership of the free world. And, as Trump sticks it to the planet Earth, photo editors are apparently going to stick it right back to him with a fair number of shots of his (tiny) hands. Here’s a look at some of the best front pages, below: 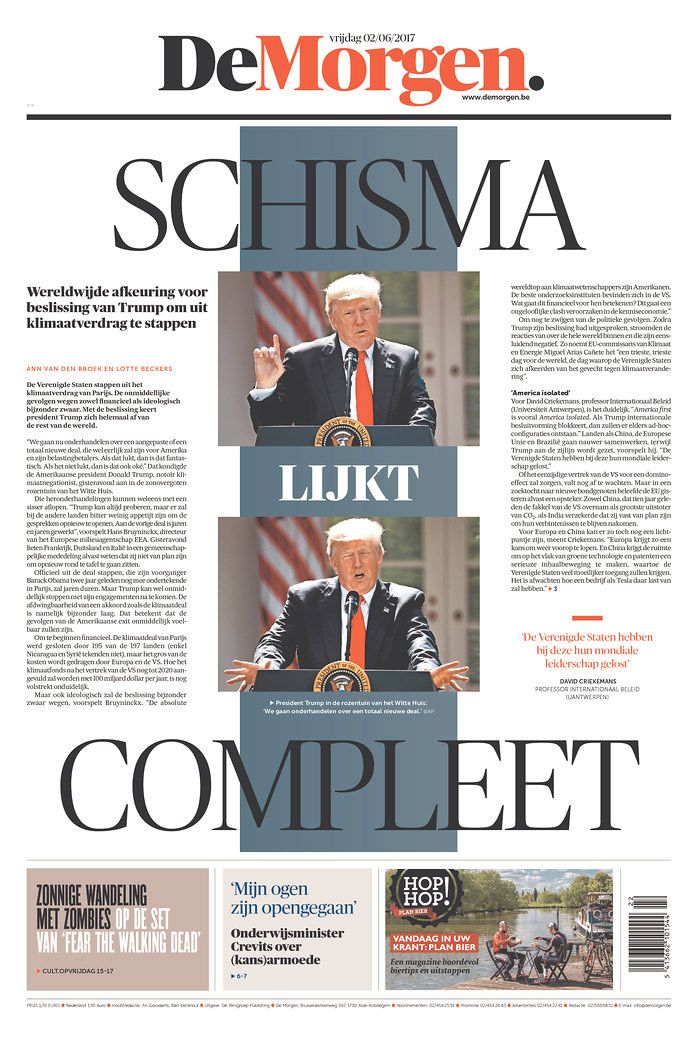 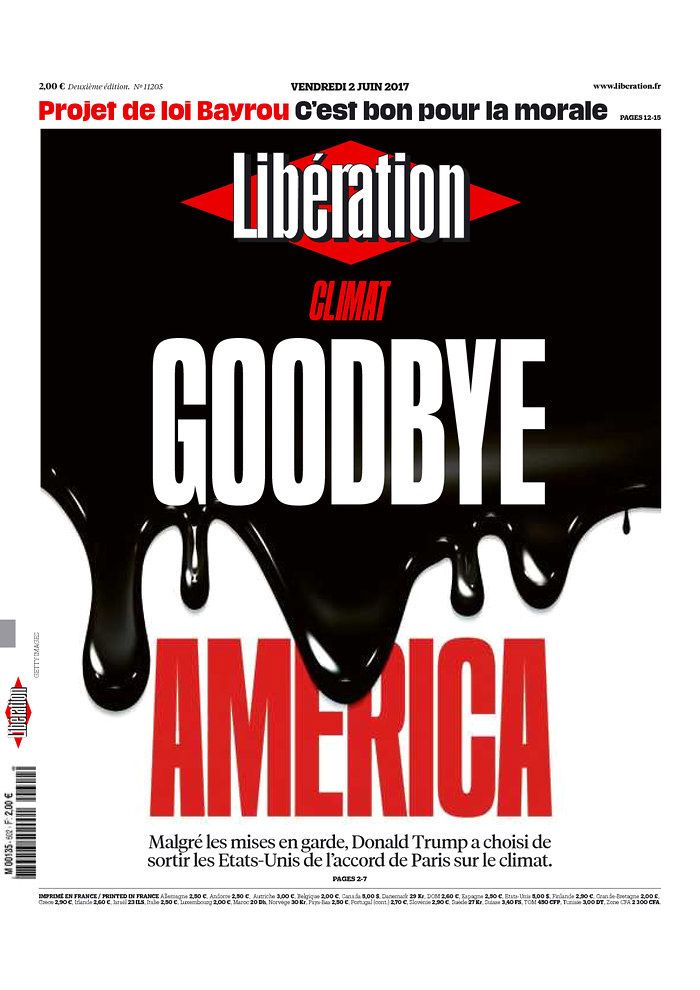 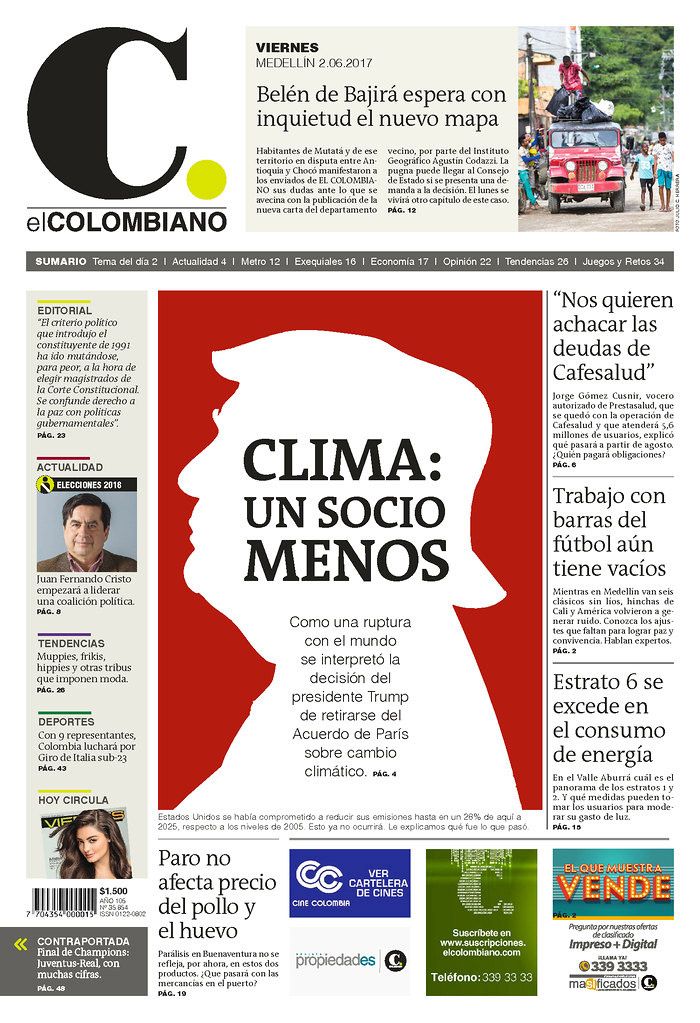 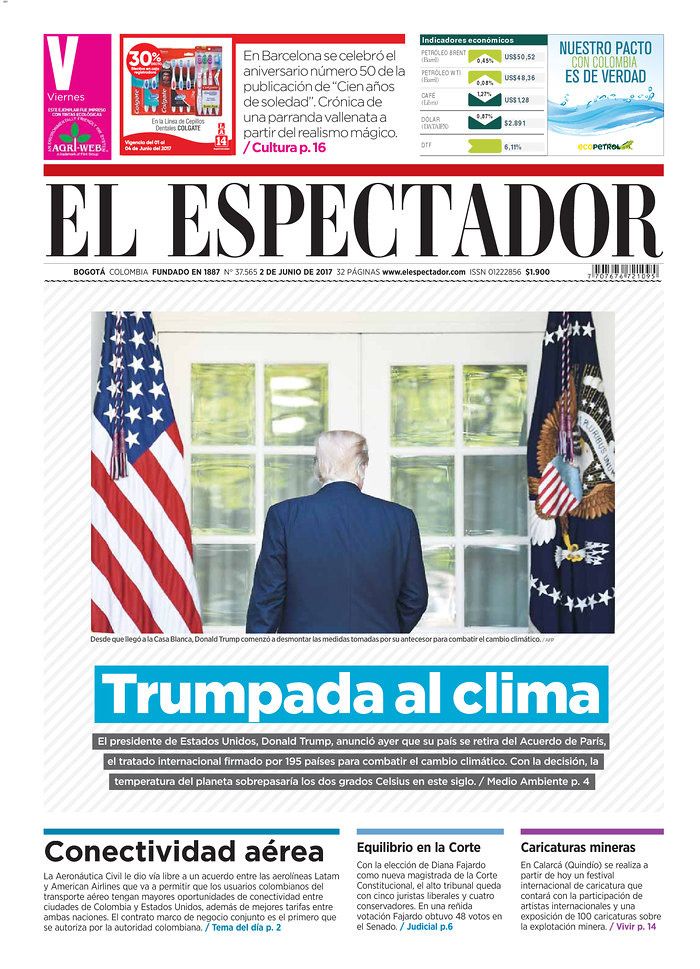 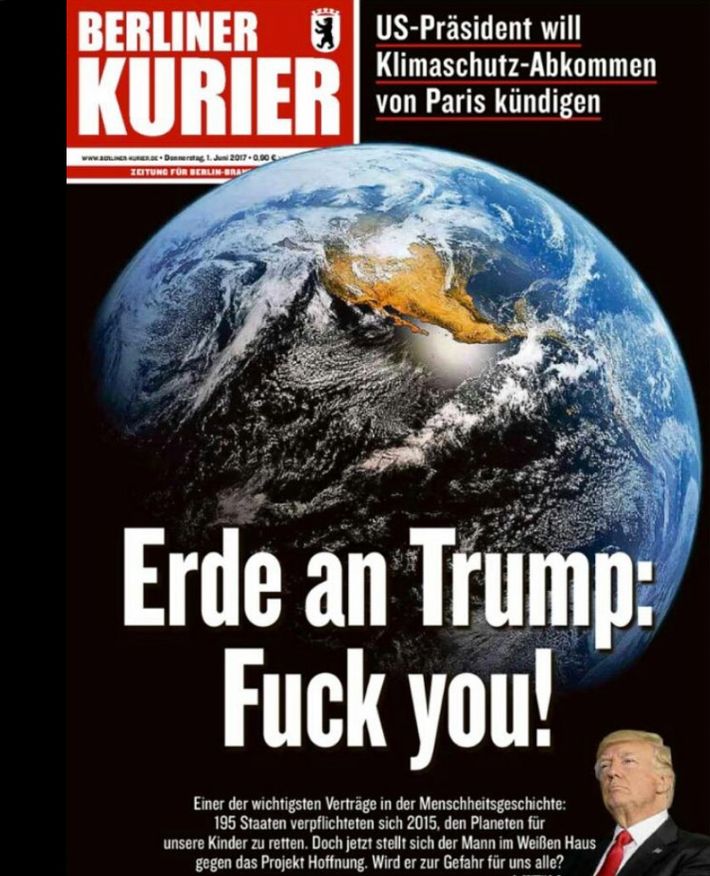 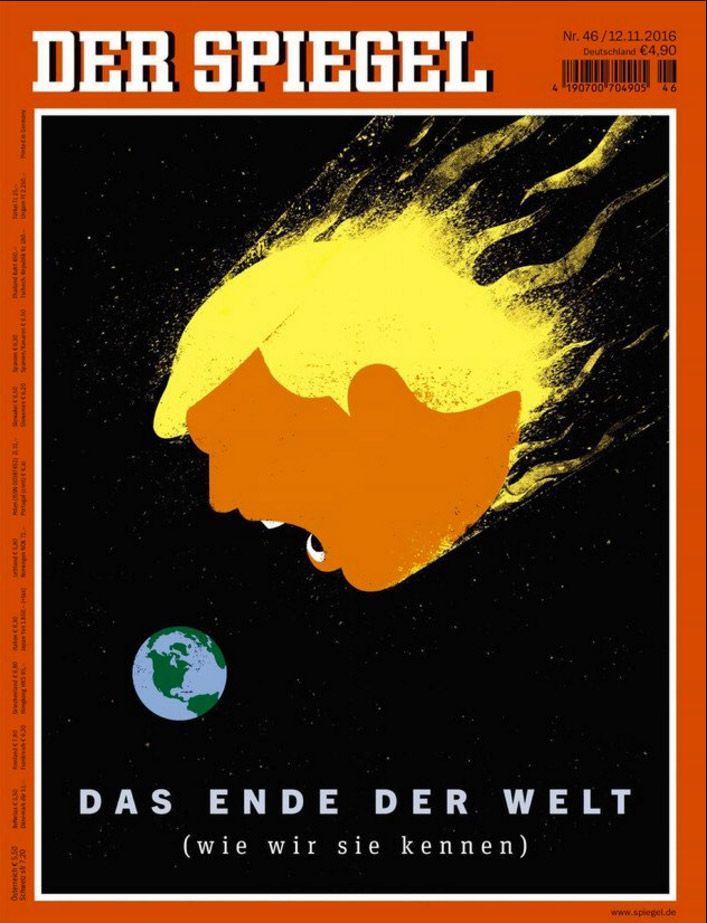 Beijing’s China Daily English edition is also telling. Trump and his decision is buried in the story, and President Xi Jinping and China’s agreements with Germany are front and center. It’s a sign that China is not just trying to take the U.S.’s place as the global leader — something experts have warned will be a major consequence of America’s Paris absence — but perhaps it already saw itself in that role before Trump’s decision. 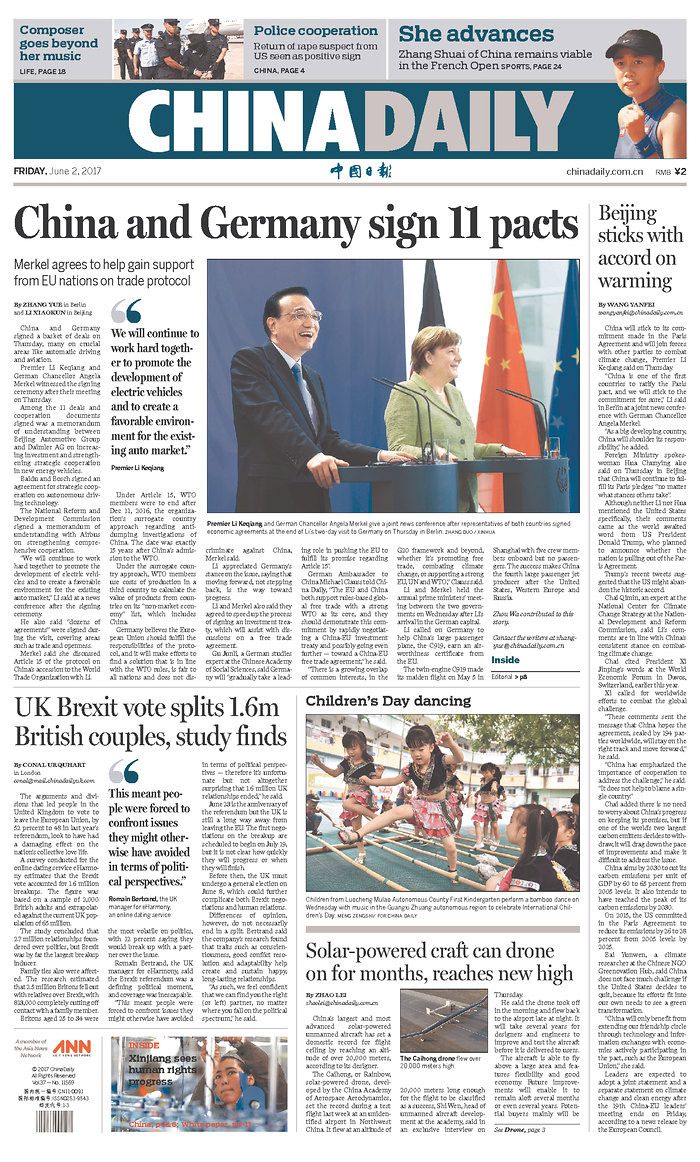 And a common theme: 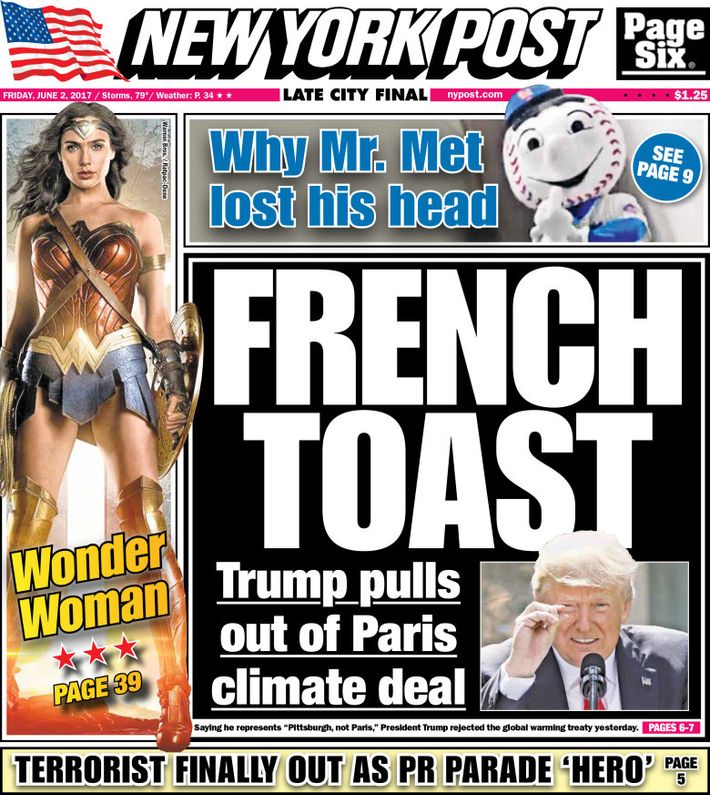 Although the New York Daily News wins the tabloid wars with a nod to its infamous 1975 front page: 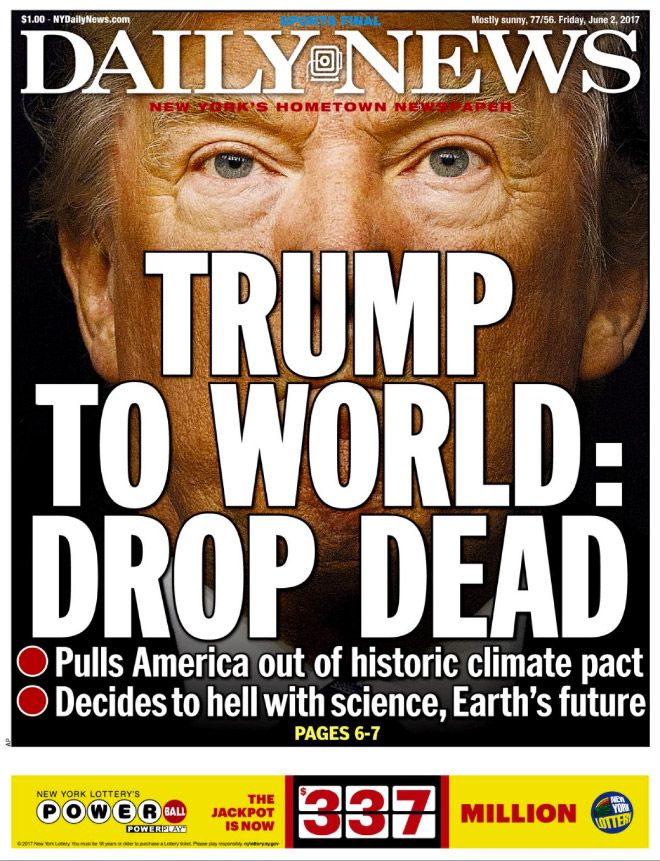 THE FEED
2:30 p.m.
the city politic
the city politic
What Happened to the Left in New York on Tuesday?
By Ross Barkan
Up and down the ballot, progressives couldn’t break through. The energy of the Trump years is gone, and it’s not clear what may replace it.
1:46 p.m.
early and often
early and often
Denied Communion at Home, Pelosi Receives It at the Vatican
By Ed Kilgore
Pope Francis’s actions were a rebuke to conservative U.S. bishops, who have attempted to ban pro-choice politicians, including Biden, from Communion.
1:40 p.m.
january 6 committee
january 6 committee
Cassidy Hutchinson Shows Trump’s Complicity in the Attack on the Capitol
By Ed Kilgore
The former top aide provides a clear and damning account of the White House on January 6 and the man who started the riot.

1:03 p.m.
2022 midterms
2022 midterms
Illinois Republicans Go MAGA While Moderates Prevail in Colorado Primaries
By Ed Kilgore
Trump chose his battles wisely in the June 28 primaries, picking two winners in Illinois and staying out of Colorado’s contentious races.
9:41 a.m.
early and often
early and often
The Most Explosive Revelations From Cassidy Hutchinson’s Testimony
By Margaret Hartmann
The ex–Mark Meadows aide testified that Trump lunged at a Secret Service agent on January 6 and said of the armed mob, “They’re not here to hurt me.”
9:36 a.m.
jan. 6 hearings
jan. 6 hearings
Liz Cheney Alleges January 6 Witnesses Are Being Intimidated
By Nia Prater
“He knows you’re loyal, and you’re going to do the right thing.”
8:31 a.m.
exhibit a
exhibit a
The Odds Are Going Up That Trump Could Be Charged
By Ankush Khardori
Cassidy Hutchinson advances the 1/6 committee’s theory of the case, though it’s not a slam dunk.
8:00 a.m.
investigations
investigations
How Leslie Wexner Helped Create Jeffrey Epstein
By Shawn McCreesh
A new documentary traces the relationship between the predator, his benefactor, and the New York media.
7:00 a.m.
early and often
early and often
Does Lee Zeldin Stand a Chance Against Kathy Hochul?
By Ross Barkan
It’s shaping up to be a good year for Republicans nationally, but that may only go so far in New York.
6/28/2022
politics
politics
Antonio Delgado Fends Off Challenge From Ana María Archila
By Nia Prater
The lieutenant governor wins the Democratic nomination for a full term, after a last-minute threat from a progressive endorsed by AOC.
6/28/2022
the national interest
the national interest
Republicans Are Trying to Cover Up Greatest Political Scandal in U.S. History
By Jonathan Chait
The GOP still won’t admit it even deserves to be investigated.
6/28/2022
politics
politics
Rudy Goes on Media Blitz After Slap on Back
By Benjamin Hart and Nia Prater
On Tuesday, Mayor Adams criticized Giuliani’s comments. Rudy responded “Tell Adams to go f- - - himself. What a f- - -ing scumbag.”
6/28/2022
the money game
the money game
The Grand Ambitions of Crypto King (and Schlubby Billionaire) Sam Bankman-Fried
By Kevin T. Dugan
The extravagantly unkempt crypto founder seems to have a big new plan: buying up Wall Street’s plumbing.
6/28/2022
migrant crisis
migrant crisis
Dozens of Migrants Found Dead in Tractor-Trailer in San Antonio
By Matt Stieb
At least 50 people died, likely from heat exposure, in the country’s deadliest human-smuggling incident in recent memory.
6/28/2022
court appearances
court appearances
Ghislaine Maxwell Gets 20 Years
By Choire Sicha
Survivors of her and Jeffrey Epstein’s sex-trafficking ring spoke at the sentencing.
6/28/2022
early and often
early and often
The Wildest Revelations From the January 6 Committee
By Margaret Hartmann
Public hearings and press reports have revealed plenty, from Ginni Thomas’s emails to Ivanka disagreeing with dad to Trump’s remarks on hanging Pence.
6/28/2022
early and often
early and often
2022 Midterms: A Guide to the Races Worth Watching
By Ed Kilgore
A cheat sheet to keep track of all the crucial races, primary upsets, and campaign drama — Trump-fueled and otherwise — from now through Election Day.
6/28/2022
early and often
early and often
Republican Congressional Candidate Pulls a Todd Akin on Abortion
By Benjamin Hart
Virginia’s Yesli Vega called into question how many women become pregnant as a result of rape.
6/28/2022
encounter
encounter
Patrick Radden Keefe Is One of the Good Guys
By James D. Walsh
The author of Rogues talks about killers, criminals, and the “inescapable cruelty” of his work.
6/28/2022
the money game
the money game
The BuzzFeed SPAC Fiasco Is Only Getting Worse
By Jen Wieczner
Some ex-employees, it turns out, were able to trade while others could only watch the shares plummet.
6/27/2022
early and often
early and often
FBI Seized Phone of Trump Coup Plotter John Eastman
By Matt Stieb
The seizure took place the same day Feds raided Trump DOJ official Jeffrey Clark’s home, suggesting the January 6 criminal inquiry is heating up.
6/27/2022
u.s. supreme court
u.s. supreme court
Supreme Court Takes a Knee for School Prayer
By Ed Kilgore
The Court’s conservatives struck another blow against the separation of church and state by ruling to protect highly performative prayer.
6/27/2022
just checking in
just checking in
So What Is Rudy Giuliani Up to These Days?
By Margaret Hartmann
Trump’s former attorney has been keeping busy by dealing with January 6–related legal woes, making weird videos, and arguing with parade hecklers.
6/27/2022
the national interest
the national interest
The Anti-Abortion Movement Is Not Going to Start Caring About Families Now
By Jonathan Chait
The wan hope for a anti-abortion, pro-family right.
6/27/2022
israel
israel
Is the BDS Movement Too Alienating to Make Real Change?
By Ross Barkan
Pro-Palestinian activists have more sway than ever. But social shaming and ad hoc boycotts only go so far.