Karen Handel’s close-but-not-that-close win in Georgia’s sixth district, the fourth Republican victory in four special elections, has officially made the party’s failure to capture a House seat in 2017 a capital-T Thing. “Let’s be clear: something ain’t working for Democrats, party insiders privately tell us,” reports Politico Playbook. Representative Ro Khanna, sounding like an upset fan calling into a sports talk radio show, called for the party to “fire its consultants” and replace them with three of his favorite opinion journalists. “Deep down [Democrats] know they needed – and still need – a win in a high-profile race in which the fight was between Trump/Republicans and Pelosi/Democrats,” writes Chris Cillizza. “There are no moral victories in politics. No matter what the losing side says — and they always say this — the only thing that really matters when it comes to special elections is the ‘W’ and the ‘L.’”

It’s certainly true that Jon Ossoff’s underperformance of the polls (he was nearly tied in the polling average, and is losing by almost 4 points) should incrementally adjust one’s view of the Democrats’ prospects. But the reason the party has lost all four special elections is glaringly simple. It is not some deep and fatal malady afflicting its messaging, platform, consultants, or ad spending allocation methods. Republicans have won the special elections because they’ve all been held in heavily Republican districts.

The special elections exist because Donald Trump appointed Republicans in Congress to his administration, carefully selecting ones whose vacancy would not give Democrats a potential opening. It feels like Democrats somehow can’t win, but that is entirely because every contest has been held on heavily Republican turf.

The overall measure of Democrats’ standing at the moment is not whether they have won, but how they have performed relative to the partisan composition of the districts in which they are running. That gauge remains quite positive. As Dave Wasserman points out, in the four special elections, they have overperformed the partisan baseline in their districts by an average of 8 percentage points: 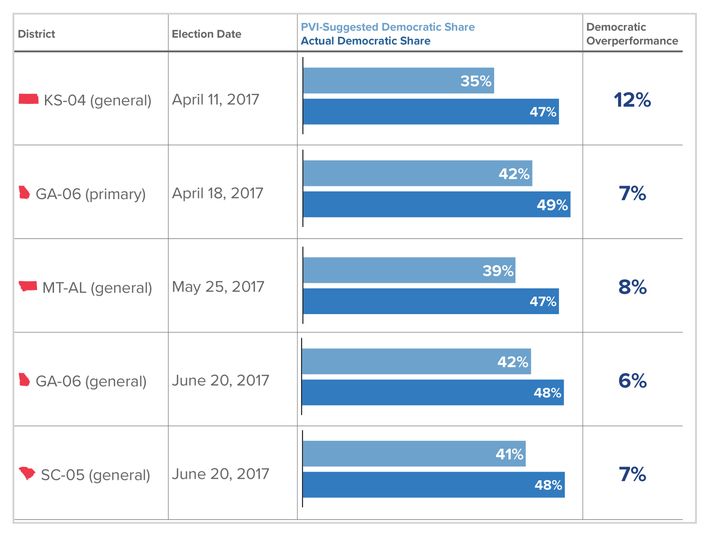 If that performance holds up in the midterm elections, it would be enough to make Democrats solid favorites to win a House majority. (The undemocratic makeup of the House map means Democrats need to increase their votes by some 6–7 percent in order to gain a majority. Of course, since the midterms don’t take place for more than a year, things could change in either direction. President Trump might change course and pass a popular domestic initiative, or benefit from a foreign crisis, or some kind of racialized conflict provoked by his draconian law-enforcement policies.

On the other hand, Trump’s standing could well deteriorate between now and then, given that the only crises he has faced so far are ones he’s created, and his managerial prowess has not exactly inspired confidence. In 2009, Democrats not only won four straight special elections to replace departing House Democrats, they also flipped a House seats from a retiring Republican. Imagine how despondent Democrats would feel if they lost a Democratic seat with Trump in office. At the time, Democrats saw the victory as evidence that they were safe from a midterm wave. “This election represents a double blow for national Republicans and their hopes of translating this summer’s ‘tea party’ energy into victories at the ballot box,” crowed the Democrats’ House campaign chairman. As it turned out, the situation deteriorated pretty badly over the next year.

So what accounts for the deep gloom overtaking Democrats? There are the atmospherics of repeatedly losing, which overpower any circumstantial explanation. There is also a long-standing party division over tactics, which gives all sides an incentive to play up the direness of defeat in order to emphasize their own customary remedies. (“My strategy will make our party stronger, but we’re doing fine anyway” is an argument nobody in history has ever made.) And then there is the psychology of surprise. A few months ago, a 4-point Ossoff defeat would have met expectations. After a frenzied nationalized race, it comes as a massive blow, which requires explanations large enough to bear the weight of the trauma it has inflicted upon Democrats.

Matthew Ygelsias’s take on Ossoff’s defeat urges Democrats to change course, citing, among other models, “Jeremy Corbyn’s surprisingly strong showing.” Corbyn, of course, lost his race, just as Ossoff did. And Corbyn, unlike Ossoff, ran nationally (rather than in a heavily conservative district) and faced a deeply discredited incumbent. An average Labour nominee not encumbered by Corbyn’s left-wing baggage would probably have won a clear victory. But since Corbyn did lose by less than he had been expected to a few weeks before, momentum transmuted his narrow defeat into a galvanizing victory, just as it transmuted Ossoff’s narrow defeat into a debacle.

The final reason for the overreaction is that everybody has priced irrationality into the system. That is, even people who know perfectly well that a swing of a few points one way or another in a single race tells very little about national conditions expect other people to overreact. It is quite possible that Handel’s victory will encourage nervous Republicans to continue holding the line for Trump’s unpopular agenda. But, to the extent the race increases the odds of Congress passing a health-care bill that polls below 20 percent, it would raise, not lower, the chance that Democrats make midterm gains. (Not that many Democrats would take that trade-off.) The irrational-response factor helps rather than hinders Democrats.
But perhaps the better response is to take irrationality for granted, and start to act … rational?

THE FEED
2:27 p.m.
the city politic
the city politic
Everyone Needs to Take a Deep Breath About Alvin Bragg
By Errol Louis
His criminal-justice reforms have prompted a freak-out, but they’re reasonable — and exactly what he promised.
1:27 p.m.
aviation
aviation
5G Will Not Make Your Plane Fall Out of the Sky
By Jeff Wise
Why did U.S. airlines fly into a panic over this?
11:00 a.m.
covid-19
covid-19
Where to Get Home COVID Tests and Why They’re So Hard to Find
By Margaret Hartmann
Here are all your current options, including where tests are in stock, insurance reimbursement, and how to get free tests from the government.

10:25 a.m.
the national interest
the national interest
Trump Unable to Grasp Hannity’s ‘Banging Head Against Wall’ Metaphor
By Jonathan Chait
Former president thinks he’s being asked about literal wall.
9:53 a.m.
covid-19
covid-19
How to Get Free N95 Masks From the Government
By Chas Danner and Margaret Hartmann
Beginning next week, the Biden administration will start distributing 400 million free N95 masks. Here’s everything we know about the program.
8:00 a.m.
encounter
encounter
Is the Next Great Pastime … Pickleball?
By Giri Nathan
Connor Pardoe wants to turn the racquet sport, once a game for retirees, into a primetime event.
7:00 a.m.
criminal justice
criminal justice
Is Solitary Confinement Here to Stay at Rikers Island?
By Matt Stieb
The movement to ban it slammed into a wall of opposition, first from Bill de Blasio and now from Eric Adams.
1/20/2022
election coup
election coup
The Election Law Central to January 6 Might Actually Get Fixed
By Ed Kilgore
Both Mitch McConnell and Kevin McCarthy are “open” to reform of the Electoral Count Act.
1/20/2022
literature
literature
Trump Invites Congress to Election-Lie Book Club
By Margaret Hartmann
Sending every House Republican a book about the “rigged” election just makes him look desperate.
1/20/2022
politics
politics
Never Mind the Facts. Trump Fans Feel Like a Majority
By Ed Kilgore
When you’ve been convinced polls are fake and actual elections are rigged, it is easy to confuse visible signs of enthusiasm as a ticket to power.
1/20/2022
questions
questions
Can I Eat M&M’s Without Having to Think About Their Personalities?
By Sarah Jones
Corporate America has gone too far.
1/20/2022
havana syndrome
havana syndrome
CIA: (Most) Havana Syndrome (Probably) Not Caused by Foreign Attack
By Margaret Hartmann
The agency’s interim findings bolster the “mass sociogenic illness” theory but are frustratingly inconclusive.
1/20/2022
politics
politics
Of Course, Eric Adams Is Turning His Paycheck Into Crypto
By Kevin T. Dugan
The mayor once talked about getting paid in bitcoin, but he’ll have to settle for the next best thing.
1/20/2022
labor
labor
Miners vs. Vultures
By Sarah Jones
A lengthy strike calls attention to the practices of private equity.
1/20/2022
the national interest
the national interest
The Filibuster Is Living on Borrowed Time
By Jonathan Chait
Mitch McConnell wants you to think the fight is over. It’s not.
1/20/2022
games
games
The Decade That Defined the Knicks
By Will Leitch
Talking with Chris Herring, whose new book looks back at the ugly-great teams of the 1990s.
1/20/2022
build back better
build back better
Give Manchin What He Wants Already
By Eric Levitz
Before Democrats give up on passing Biden’s climate agenda, they should see if the West Virginia senator will take yes for an answer.
1/20/2022
the money game
the money game
Last Sane Man on Wall Street
By Andrew Rice
Nathan Anderson made his name exposing — and betting against — corporate fraud. But short selling in a frothy pandemic economy can be ruinous.
1/19/2022
politics
politics
Kyrsten Sinema’s Moment of Infamy
By Ben Jacobs
The enigmatic Democrat votes for the filibuster and against her party.
1/19/2022
politics
politics
Biden’s Marathon Press Conference Didn’t Quite Go As Planned
By Ed Kilgore
The president’s aim was to get back on message, but he may have stirred new trouble with his remarks on Russia and Ukraine.
1/19/2022
today in eric adams
today in eric adams
What If We Stopped Drivers From Killing People?
By Tirhakah Love
Doing very little hasn’t worked yet. What if we tried?
1/19/2022
wall street
wall street
BlackRock Is Going Viral on TikTok As a Free Place to Pee
By Kevin T. Dugan
“You guys can all judge me if you want, but I do not care. I have never, ever been happier!”
1/19/2022
covid-19
covid-19
Neil Gorsuch Wear a Mask Challenge
By Irin Carmon
As the Supreme Court tries to quell a COVID controversy, the conservative justice remains maskless.
1/19/2022
2022 midterms
2022 midterms
Biden’s Approval Rating Is Low But Still Higher Than Trump’s
By Ed Kilgore
With better skill than he’s shown lately and a bit of luck, Biden can mitigate 2022 midterm losses and bounce back in 2024.
1/19/2022
wall street
wall street
Are Wall Street Bankers Underpaid?
By Kevin T. Dugan
Bank CEOs are complaining about pay, but workers in crypto and private equity are making more and having more fun.