One of the beauties and dangers of the internet’s ability to dilate fandoms so that they never begin and never end is that people get to spend too much time thinking about stuff. For instance, Cars 3 — the latest kid-friendly Pixar film — is out today, but it will likely not address the fact that a car genocide happened in which Car Hitler exterminated 6 million Car Jews during Car World War II. It is very easy to prove that Car Hitler is real, using canonical Cars lore.

The general line of thought is something like this: The Cars-verse includes a World War II–era Jeep named Sarge, who explicitly references events like the Battle of the Bulge. In the direct-to-DVD film Planes (made by Disney but not Pixar), there is an actual WWII flashback in which the plane Skipper recalls losing his entire squadron in the Pacific Theater. Assuming that Car WWII occurred, and that it contains the same contours as the actual WWII, we can assume that there were Car Axis powers, and thus a Car Hitler.

All of this has led up to a popular copypasta (that is, a popular string of anonymously authored text, copied-and-pasted into comments and blog posts across the internet), origin unclear, but likely 4chan, which lays out how the Cars universe is just as messed up as our own.

The thing I really like about Planes is that we learn that WWII happened in the Cars universe. Which means there was a Cars Hitler, a Cars holocaust, a Cars Pacific War, a Cars D-Day, a Cars nuking of Hiroshima and Nagasaki, a Cars Battle of Iwo Jima …

This leads to so many important questions, like: were the Cars Little Boy and Fat Man nukes sentient? Was it a suicide mission? Are ALL Cars nuclear weapons sentient? Did Tsar Bomba have a personality?

What kind of car was Car Hitler? A VW? A forklift?

I could go on

A quick Google will find this text often repeated word-for-word across the internet, where denizens have been considering the question for a while. A popular Tumblr exchange dating back to 2013 goes into more detail. From now-deactivated user calumnw:

in Cars 2 one of the racecars mentions their mother. and then the racecar waves to his mother in the audience. one automobile birthed another automobile.

when Mater tries to convince a car that he is not a spy, he says “i’m not a spy. my specialty is towing and salvage”. the car responds by saying “right. and mine is developing iPhone apps” before winking. not only is this a poorly placed pop cultural reference, but they have iPhones in this world. smartphones. Cars can hold mobile phones and use them and use their touch screen for various uses.

in Cars 2 there is a Pope. The pope is a car in a pope hat. he rides around in a Popemobile. a CAr is riding in another car. they make reference to the Popemobile. “is the Popemobile Catholic?”, Mater says as a “well duhhh” moment, much like our saying, “Is the Pope catholic?”. presumably this means the Popemobile is employed and must be specifically Catholic in order to be the chauffeur and carrier to the regular pope. Also, Catholicism is in this Universe. this means that there must have been an actual Jesus Christ car. also they mention at one point that gasoline is a “fossil fuel. as in dead dinosaurs!” so there must have been dinosaurs at one point in the Cars universe but were they actual dinosaurs or car dinosaurs how did this civilsation start how did the

In Planes Skipper is a retired navy plane. Therefore there are wars in the cars universe. In fact, in his confession to Dusty he mentions that he only flew one mission, in the Pacific, where he and a squadron of trainees were killed- PLANES were KILLED- during an attack on the Japanese Navy. At what point does a plane die? Can a plane be rebuilt from its salvaged parts and retain its sentience and memories?

For there to be a World War II in the cars universe, there must have been a World War I, presumably sparked by the assassination of the cars equivalent of Archduke Ferdinand. Previously we’ve been shown that older cars (the radiator springs crew) are designed like the cars from the year of their “birth.” Does car Archduke Ferdinand look like a 1914 car? What was the civilisation of cars in the centuries before human beings themselves invented cars? what was the 19th century like in the cars universe? How do you assassinate a car? How does ? Hw> w/ cars

Anyway, while your kids are worried about whether or not Lightning McQueen will win the big race, you get to ponder the logistics of a Cars 9/11. Have fun! 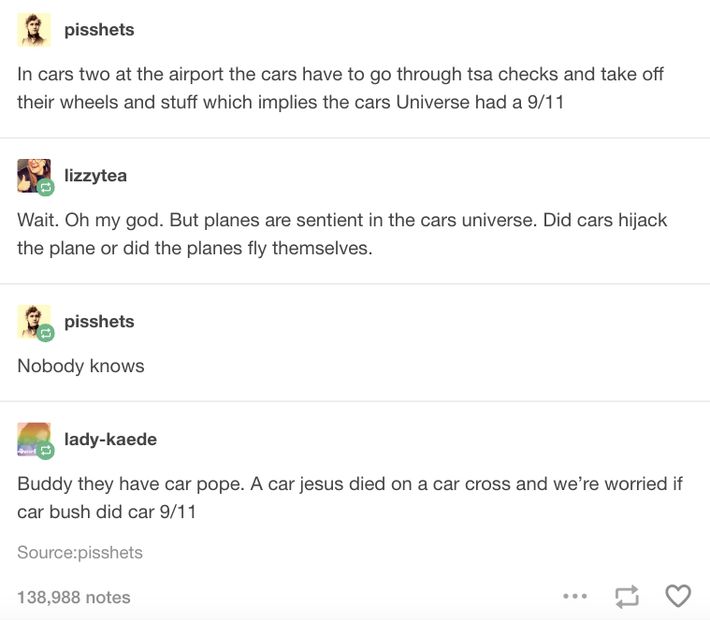