Keith Hall’s Congressional Budget Office scored a “straight repeal” of Obamacare as terrible back in January. Today they clarified that nothing had changed. Photo: Andrew Harrer/Bloomberg via Getty Images

Mitch McConnell had to scuttle his backup plan of voting on a straight repeal of Obamacare when multiple senators publicly announced their opposition to bringing it to the floor. But faithful to its mission, the CBO released a score of McConnell’s capsized idea anyway.

It wasn’t a heavy lift, since CBO had “scored” the 2015 legislation that repealed Obamacare (it was vetoed by President Obama) this last January, at the request of Senate Democrats eager to dramatize the nasty effects of a revival of that proposal.

The new/old “score” does nicely summarize some of its components in a useful chart: 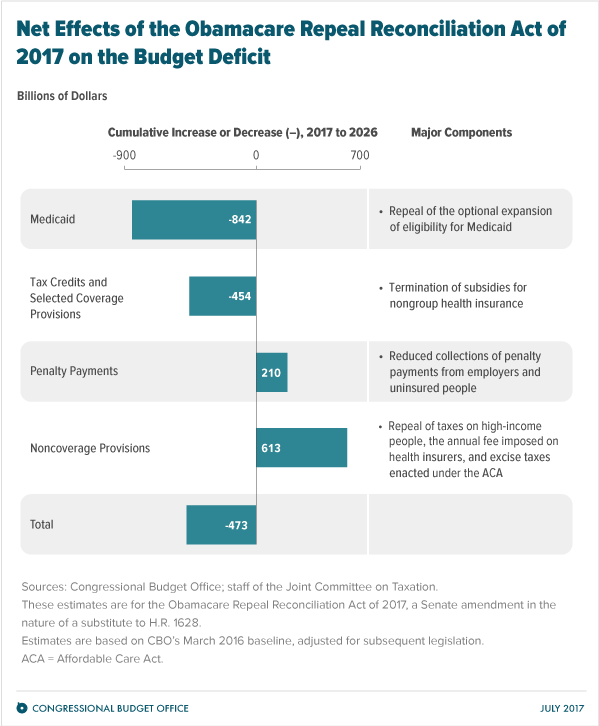 Of particular interest: even though the “straight repeal” would not impose a per capita cap on Medicaid, its termination of the Affordable Care Act’s Medicaid expansion is so abrupt that it would cut Medicaid spending over ten years by $842 billion. The complete termination of insurance purchasing subsidies would hit consumers with another $454 billion in costs. But hey: high-income Americans would benefit from $613 billion in tax cuts. And the whole mess would reduce the budget deficit by $473 billion. So it keeps faith with the unshakable conviction of some conservatives that “reforming” health care means cutting benefits for poor people to shower tax cuts on the wealthy.

The latest news on the health care front is that President Trump has apparently asked certain disgruntled Republican senators (at a minimum conservative Mike Lee and moderate Rob Portman, but perhaps others) to meet tonight and find some bill they can all agree on. It is not clear whether the starting point is supposed to be the discarded BCRA, the “straight repeal” bill, or something entirely different. But it is increasingly obvious that whichever direction they decide to do, there will probably be a CBO assessment telling them it still stinks.

+Comments Leave a Comment
CBO Repeats Itself: Straight Repeal of Obamacare a Disaster