According to a new Kaiser Family Foundation survey, Trump supporters are divided down the middle on advisability of Obamacare repeal. Photo: Mark Makela/Getty Images

We are often informed that the dangerously self-destructive GOP-only process of “repealing and replacing” Obamacare is mandatory for congressional Republicans because “the base” demands it. Earlier this week a primarily anecdotal McLatchy report from Representative Mark Meadows’s district in North Carolina was headlined: “Republican base howls at prospect of congressional failure on Obamacare.” Here’s a sample:

Fed up with what they see as timidity to take action in Washington, many voters in Meadows’ district say they had hoped Donald Trump’s election in November would mean congressional Republicans would start to deliver.

“We sent Trump there to rattle their cages and it’s ridiculous it’s not happening,” said Katherine Allen, 65, who lives near the Pisgah National Forest. “I understand some of the senators are worried, but didn’t they make a promise?”

Anecdotes aside, there is empirical evidence that “the base” that is allegedly howling for an immediate partisan Obamacare repeal measure may be a bit of an exaggeration. The Kaiser Family Foundation’s health-care tracking poll is showing that given the choice of pursuing a “repeal and replace” strategy or of “working with Democrats to improve ACA,” 41 percent of self-identified Republicans want their caucus in Congress to take the latter approach, with a spare majority — 54 percent — favoring the former approach (the one the Republican Congress has been taking all this year). More amazing yet, self-identified “Trump supporters” split right down the middle, with 47 percent favoring “repeal and replace” and 46 percent the very different option of bipartisan action to fix Obamacare. 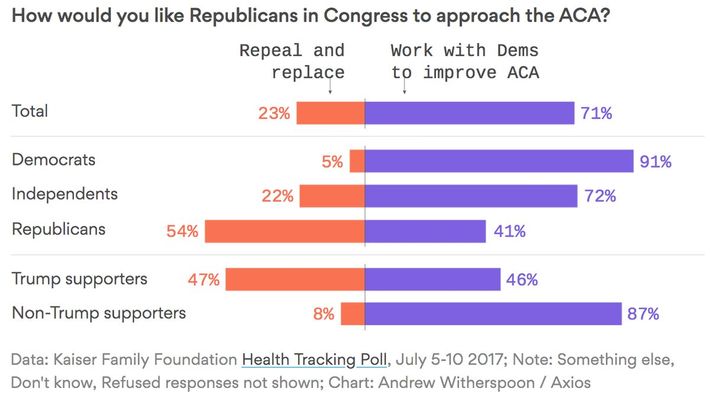 It is somewhat less surprising but equally important that independents overwhelmingly favor the “bipartisan fix” option — nearly as much as Democrats.

So in continuing down their current track, congressional Republicans are defying swing voters and dividing their own base. That’s generally not a recipe for political success.