The cover of New York’s current issue takes inspiration (as anyone of a certain age will recognize) from the Whole Earth Catalog, the counterculture manual first published by Stewart Brand in 1968. It was a how-to book for people with an urge to go back to the land, giving basic instructions to citified folks about operating wood stoves and drilling wells and such. 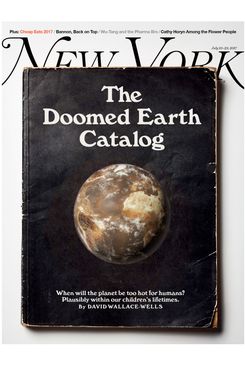 Richard Goldstein, a longtime editor at The Village Voice, was a frequent contributor to New York in its early years, and he knew many New Yorkers who were feeling the need to get out of town. “There was,” he explains today, “a lot of hostility coming from the police, who just regarded hippies as baby seals who could be clubbed. I saw many, many people with long hair who were bleeding, and then violence from poor people who lived in the neighborhoods that hippies colonized, because they resented them and took out a lot of their anger.” Two young hippies had even been murdered in the East Village a few years earlier. In short, the backlash against the 1960s counterculture was getting under way (and soon came to a head with Richard Nixon’s reelection). “People who were more gentle or pacifistic — it just became harder and harder to be that way, given all the violence around us,” Goldstein says. “So a number of people decided that they needed to get out of the city, where they didn’t have to deal with those issues. They could make a new life for themselves. To the Catskills, which were down-and-out at the time, and also to places like Vermont, where you now have the Bernie Sanders demographic” — young Brooklyn expats turned old Vermonters. “It’s the same people! And their kids. It was very good for the state, too. And I had friends who did this, so I went and visited them and spent time on their commune or farm or whatever.” 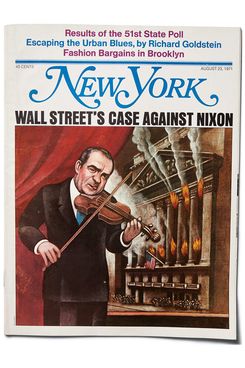 “The Urban Blues and the Great Green Hope” appeared in the issue of August 23, 1971. “Moving from the city; withdrawing from the mass. Any way you cut it, you’re acknowledging that the Movement has failed to provide its followers with a Way,” Goldstein wrote. “Hip culture, in its urban beachheads and campus sanctuaries, seemed to be building a new community, but that fell apart before the onslaughts of enterprise and the ravages of trend. In the wake of that failure, we have all been left holding an empty bag, feeling isolated and aimless, the loneliness of men without a movement. In the seventies, it turns out that politics is incomplete; it cannot teach us how to live.” We meet Mike and Harriet Kramer, out of Cobble Hill and into a house in Woodstock with their two small daughters; we meet Phil and Toby, moving to Vermont and eating grits for breakfast.

They were living the dream, following what Goldstein reminds us is “an old American reflex, getting away from the evil city and having a place where you could control what went on, and live in harmony of your own making.” But they were also, sometimes, way out of their element. “These are urban people, right? Dirt is something in a pot and a flower growing out of it,” he says, laughing. “I was kind in that story — I didn’t talk about how uncomfortable they had it, how terrible the food was, and the debates about who would go to town for milk because nobody knew how to milk a cow. Everybody was too tired at night to have sex or listen to Cream records. I thought it would all be sex and drugs and rock and roll, and apart from the drugs, which were just the ordinary drugs — a lot them were stoners — it wasn’t.” How long did he stay? “As long as I could take it. Maybe a week, maybe a little less. At some point I really had to get pavement under my feet.”

But some expats not only stayed but flourished. Daisy Kramer Bolle was 2 when her family was photographed for the story. Her parents still live in Woodstock, and she, after a stint in L.A., came back herself. “They love it here. They go to the city only when they have to,” she says. “The whole Woodstock lifestyle really worked out. They live in the same house, are still married.” Her parents opened a pair of stores in Woodstock that she now runs, along with a third shop, Dig, that she started in Saugerties. “I chose exactly the same life for myself,” Bolle says. “You know, they were right about everything: the environment, civil rights, all of it. Everything except patchouli.”

THE FEED
23 mins ago
early and often
early and often
The Hunter Biden Counteroffensive Begins
By Matt Stieb
Tired of being a GOP punching bag, he threatened Fox News with a defamation suit and encouraged the DOJ to investigate how his laptop became public.
12:39 p.m.
the national interest
the national interest
The GOP Attack on Ilhan Omar Trivializes Antisemitism
By Jonathan Chait
Elevating Marjorie Taylor Greene exposes the hypocrisy.
11:47 a.m.
religion
religion
Badass Pope Briefly Endorses Giving People the Finger
By Benjamin Hart
A weird Thursday-morning tweet from the pontiff.

11:17 a.m.
crime
crime
New Jersey Councilwoman Shot and Killed Outside Her Home
By Nia Prater
Eunice Dwumfour, a 30-year-old member of the Sayreville Borough Council, was found shot dead on Wednesday night.
10:57 a.m.
early and often
early and often
The Latest Hunter Biden Revelation Is a New Low
By Matt Stieb
Texts reportedly show he withheld an employee’s pay for sex.
10:32 a.m.
the talented mr. santos
the talented mr. santos
Here’s Every Single Lie Told by George Santos
By Matt Stieb
Navigating the many exaggerations and falsehoods of New York’s newest representative.
10:02 a.m.
creature capers
creature capers
The Hunt Is on to Find the Dallas Zoo Bandit
By Matt Stieb
Police are looking for whoever is responsible in a strange crime wave in which animals have been killed and apparently stolen from the zoo.
9:10 a.m.
what we know
what we know
New FBI Search of Biden’s Home Finds No Classified Documents
By Margaret Hartmann
The search of Biden’s Rehoboth, Delaware beach house was planned and consensual, like the searches of his office and Wilmington residence.
8:00 a.m.
early and often
early and often
The GOP Can’t Remember Why It Took the Debt Ceiling Hostage
By Eric Levitz
Republicans are fighting Biden for the sake of fighting.
2/1/2023
politics
politics
Eric Adams’s Approval Rating Is Falling
By Nia Prater
Crime is the top issue for New Yorkers, and very few say it’s gotten better under his watch.
2/1/2023
early and often
early and often
Nikki Haley Is Taking on Trump 2024 (or Running for VP)
By Ed Kilgore
The South Carolinian is expected to announce her run later this month, but Trump has already staked a claim on her crucial home state.
2/1/2023
tremendous content
tremendous content
Watch Trump Repeatedly Plead the Fifth, Like a Mobster
By Margaret Hartmann
New deposition video shows Trump, who once said only criminals and “the mob” take the Fifth, asserting his constitutional right more than 400 times.
2/1/2023
politics
politics
There’s Another Push to Change New York’s Bail Reforms
By Nia Prater
Governor Kathy Hochul reaffirmed her intent to give judges more discretion in setting bail during her budget presentation Wednesday.
2/1/2023
let it snow
let it snow
Our Long Local Snowmare Is Over
By Benjamin Hart
New York City finally saw some flakes stick to the ground on Wednesday morning. Better late than never.
2/1/2023
the big picture
the big picture
The End of ‘Zombie Neoliberalism’?
By Eric Levitz
There is burgeoning, bipartisan support for big government.
2/1/2023
the national interest
the national interest
It’s Republicans Who Won’t Negotiate Over the Budget Deficit
By Jonathan Chait
The other big lie in this hostage crisis is hiding in plain sight.
2/1/2023
the system
the system
The Government’s Telling Response to Tyre Nichols’s Death
By Zak Cheney-Rice
The reforms being considered would probably not have prevented his killing. But officials have gotten better at preempting outrage.
1/31/2023
life after roe
life after roe
RNC Tells Republican Politicians to Stay Extreme on Abortion
By Ed Kilgore
The RNC passed a resolution scolding politicians who backed off after the end of Roe v. Wade and urging them to stay on the offensive in 2024.
1/31/2023
tyre nichols
tyre nichols
Eric Adams Defends Specialized Police Units Following Tyre Nichols Case
By Nia Prater
The New York mayor said that, while he did not want to second-guess the decision to disband Memphis’s SCORPION unit, “units don’t create abuse.”
1/31/2023
the money game
the money game
Jerome Powell’s Crazy Balancing Act
By Kyla Scanlon
The Fed chairman faces a big decision with the world watching. No one said his job would be easy.
1/31/2023
the national interest
the national interest
Why DeSantis Is on Track to Beat Trump
By Jonathan Chait
The main Trump alternative has learned the lessons of 2016.
1/31/2023
what we know
what we know
A Seventh Officer Has Been Suspended After Tyre Nichols’s Death: Updates
By Intelligencer Staff
The officer was relieved of duty the same day the five officers charged with murder were fired for the beating.
1/31/2023
games
games
The Lost Joy of Hating Sports Announcers
By Will Leitch
Self-righteous jerks like Billy Packer don’t exist on TV anymore, and that’s a shame.
1/31/2023
lost in translation
lost in translation
The Spy Who Wasn’t
By Paula Aceves
Baimadajie Angwang wanted a visa for his daughter. He got charged with being an “insider threat” instead.
1/30/2023
royals
royals
King Charles Is Ready to Trash Harry — or Declare a Truce
By Margaret Hartmann
Or Prince Harry is right about the U.K. press relentlessly peddling utter nonsense.