With the latest, and probably final, version of the Republican plan to repeal and replace Obamacare due to emerge Thursday, the party leadership is in the astonishing position of desperately trying to design a workable plan to meet their deadline. “I hate to break this one to you guys, but I don’t think they have any idea yet how they’re going to do this,” a senior Republican aide tells HuffPost.

As the deadline approaches, the endpoint of a coherent bill seems to be moving further out of reach. Senator Ted Cruz has been selling his colleagues on an amendment that would allow insurers to sell unregulated plans with minimal coverage, as long as they also sell regulated plans. That would split the market into two completely different risk pools, one cheap and healthy, and the other sick and expensive, an arrangement insurers call “unworkable.” Another Republican senator, Mike Rounds of South Dakota, is trying to undo the damage Cruz’s plan would do by creating some kind of “ratio” between the costs of the expensive insurance and the cheap insurance. Such an approach has never been tried, and no health-care experts have emerged to suggest it might work even in theory.

If you’re going to rush a secret plan into law, you really need to be working with an off-the-shelf policy. The health-care debate started eight years ago. Republicans have had a long time to whiteboard some ideas. They are trying to reconceptualize the problem almost from scratch over a few days. This is like the Airplane! flight attendant announcing, “By the way, is there anyone onboard who knows how to fly a plane?”

The attempt to hastily devise a fix for a problem the Republican bill itself creates is symptomatic of the degree to which their plan has lost all touch with its rationale. The putative reason Republicans have given for repealing and replacing Obamacare is that the law is a “train wreck,” “collapsing,” and so on. The individual health-care exchanges are supposedly heading into a “death spiral” of sicker customers, higher premiums, and fleeing insurers. GOP leaders have insisted they are on a “rescue mission.”

Even if the exchanges were collapsing into a death spiral, it would not justify their plans to slash Medicaid, a program that does not require actuarial balance and is not even theoretically susceptible to a death spiral. And in any case, a mounting body of evidence has found that the exchanges are stable. Financial analysts have said this, insurance actuaries have said it, even the federal government has said it.

Recently, another piece of evidence has underscored the conclusion in even more detail. Cynthia Cox and Larry Levitt have a detailed report on the state of the markets. They conclude that insurers on the whole have found a stable price point. The “medical loss ratio,” which means the share of premium payments paid out in claims, dropped significantly in the beginning of this year: 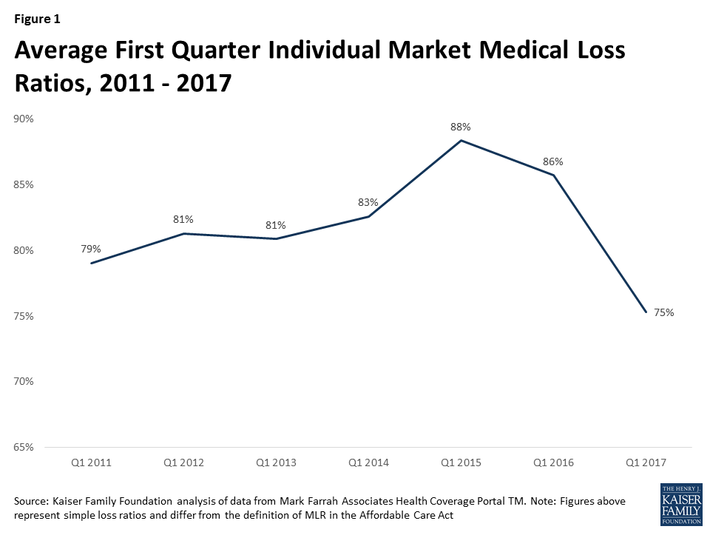 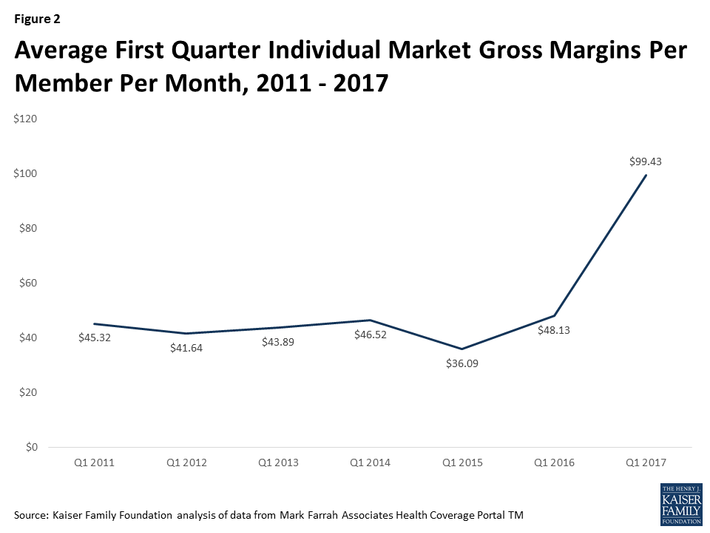 Facing a brand-new market, insurers initially set their premiums far too low (and much lower than the Congressional Budget Office forecast). It has taken a few years, but they have corrected the error and settled in at a stable level. Republicans have cherry-picked horror stories of skyrocketing premiums, and it is true that 2017 saw premiums rise as part of this price correction. But there is zero reason to expect premiums to need to rise more.

Except, of course, for the fact that the government is run by people who are trying to kill Obamacare. Because of that fact, insurers in many states have fled the market due to political uncertainty. The Trump administration has followed a strategy of threatening to destroy the exchanges through sabotage, and then using the response by insurers to these threats as evidence that the law is collapsing on its own. Trump’s Department of Health and Human Services has put out press releases celebrating insurer exits from the marketplaces.

Health-care policy analyst Adrianna McIntyre noticed an interesting fact about these insurer departures. They are disproportionately concentrated in states where the exchange is run by the federal government rather than by the state. The National Academy for State Health Policy finds that state-based exchanges are not seeing their insurers flee the markets.

“With federally-facilitated exchanges that use healthcare.gov, the federal government is responsible for most exchange activities,” McIntyre tells me. “This includes consumer outreach, a function that is hugely important to insurers — if the Trump administration decides not to allocate resources toward outreach for the next enrollment period, insurers might reasonably expect that the people who do sign up will be sicker, on average.” If your business is dependent on cooperation from people who publicly celebrate every time a firm quits the market, you may have some reservations about staying in the market.

This policy makes perfect sense if your goal is to roll back the welfare state by any means necessary, or to undo as many Obama-era policies as you can. But that isn’t what Republicans have promised, and it isn’t what the public wants. (What the public wants, by nearly a three-to-one margin, is not to repeal and replace Obamacare but to work with Democrats and fix the law.) So the Republican Congress has to destroy a law that people like, and then replace it with something that replicates its current functions. They are scrambling to solve a problem that has no real answer.

THE FEED
5:22 p.m.
games
games
The U.S. Pulled It Off
By Will Leitch
They survived a tense second half and an injury to their best player to beat Iran.
4:31 p.m.
early and often
early and often
Republicans: Leave the World’s Richest Man Alone!
By Margaret Hartmann
Ron DeSantis and Kevin McCarthy want everyone to “stop picking on Elon Musk.” They’ve barely said anything about Trump dining with antisemites.
3:33 p.m.
politics
politics
Eric Adams Says His Upcoming Trip to Qatar Is ‘On My Dime’
By Nia Prater
The mayor is set to travel to Doha, Qatar, in preparation for New York City to serve as a host city for the 2026 FIFA World Cup.

2:46 p.m.
on with kara swisher
on with kara swisher
Chemist Carolyn Bertozzi on Biology’s Dark Matter
By Intelligencer Staff
The 2022 Nobel Prize winner tells Kara Swisher why cancer cells are a lot like M&Ms.
2:08 p.m.
the national interest
the national interest
Trump Brought Nazis Into the GOP. DeSantis Won’t Expel Them.
By Jonathan Chait
White nationalism is not just a Trump problem.
1:52 p.m.
sam bankman-fried
sam bankman-fried
In New Interview, SBF Talks GOP Donations, Fraud, Polyamory
By Kevin T. Dugan
Sam Bankman-Fried talks to a YouTuber — and sure has a lot to say for someone under criminal investigation.
12:43 p.m.
early and often
early and often
The NYC Media Might Have Cost Democrats the House
By Eric Levitz
After New York outlets hyped rising crime, counties in the NYC media market voted more Republican than their immediate neighbors.
11:37 a.m.
world cup
world cup
The Five Most Dramatic Subplots Ahead of U.S.-Iran
By Benjamin Hart
As the geopolitical foes square off in Qatar, there’s a lot hanging in the balance.
8:00 a.m.
early and often
early and often
Joe Biden Is Realizing Trump’s ‘America First’ Vision
By Eric Levitz
The president is alienating allies and waging economic war on China to ensure America’s industrial supremacy.
7:30 a.m.
the city politic
the city politic
10 New York City–Based Charities I’m Giving To
By Errol Louis
Giving Tuesday is a great opportunity to help fix what’s broken here in New York and around the world.
7:00 a.m.
cover story podcast
cover story podcast
The Billionaire’s Epiphany
By Intelligencer Staff
We weigh the collateral damage of one man’s con and another’s hero complex.
11/28/2022
tremendous content
tremendous content
Mike Lindell Is the Leader the Republican National Committee Deserves
By Margaret Hartmann
But he’s not the one it needs right now, so his candidacy is probably doomed.
11/28/2022
early and often
early and often
The Last Time the Republican Establishment Tried to Stop Trump
By Ross Barkan
If you think Trump is finished, remember the 2016 primaries.
11/28/2022
foreign interests
foreign interests
A Stunning Wave of Protests Has Erupted in China Over Its Zero-COVID Policies
By Chas Danner
Demonstrations against COVID restrictions — and the government — took place in numerous cities across mainland China over the weekend.
11/28/2022
the money game
the money game
13 More Disturbing Revelations About Sam Bankman-Fried
By Kevin T. Dugan and Matt Stieb
It’s been weeks since the dramatic crumbling of his crypto empire, and we’re still learning about the mess left behind by Bankman-Fried.
11/28/2022
social studies
social studies
Do You Have a Right Not to Be Lied To?
By Jeff Wise
Freedom of speech is being reconsidered by a group of legal scholars, who argue it is not absolute and may be outdated in a world of disinformation.
11/26/2022
politics
politics
What We Know About Trump’s Dinner With White Supremacist Nick Fuentes
By Chas Danner
The former president is claiming he did not know who his notorious dinner guest was.
11/25/2022
games
games
The U.S. Just Outplayed England at the World Cup
By Will Leitch
They were the better team in Friday’s scoreless draw — which is amazing.
11/25/2022
early and often
early and often
One Worrying Sign for Democrats in the Midterm Results
By Eric Levitz
The gubernatorial elections in Georgia and Ohio suggest that a right-wing Republican could win moderate voters in 2024 merely by not being Trump.
11/23/2022
early and often
early and often
The DOJ Wants to Know What Mike Pence Knows About January 6
By Matt Stieb
Prosecutors investigating Trump’s attempt to stay in office reportedly want Pence to testify, which could spell big trouble for his former boss.
11/23/2022
tremendous content
tremendous content
Please Don’t Ruin Thanksgiving With These White House ‘Talking Points’
By Margaret Hartmann
I voted for Joe Biden because he tacitly promised I wouldn’t have to read any more guides to arguing with my Trumpy relatives.
11/23/2022
what we know
what we know
Alleged Club Q Shooter Previously Threatened Mother: Updates
By Chas Danner and Nia Prater
It is unclear why the 22-year-old suspect was allowed to retain guns after a previous incident involving police.
11/23/2022
mass shootings
mass shootings
Six Killed in Shooting at Virginia Walmart
By Margaret Hartmann
The gunman, who is believed to be a Walmart employee, opened fire in a break room before turning his weapon on himself.
11/23/2022
the national interest
the national interest
If DeSantis Wins the Nomination, Trump Will Endorse Him
By Jonathan Chait
Trump is out for himself, not revenge.
11/23/2022
screen time
screen time
Twitter Is Just a Guy Now
By John Herrman
At the company — and on the platform — there’s no escaping Elon.