At his first briefing as White House communications director, Anthony Scaramucci tried to dispel the rumors that he’s been engaged in a longtime feud with White House chief of staff Reince Priebus and that’s what’s kept him out of the Trump administration for so long.

“Reince and I have been personal friends for six years,” Scaramucci said. “We are a little bit like brothers, where we rough each other up a little, which is totally normal for brothers. There’s a lot of people here who have brothers, so you get that.”

On Wednesday night, Scaramucci roughed up his old pal by tagging him in a tweet calling for an FBI investigation into the leaking of his financial disclosure. 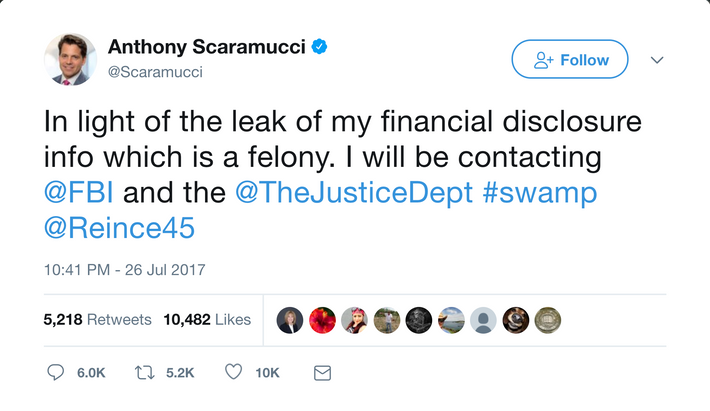 Scaramucci was responding to Politico’s report that despite taking a job in the White House, he still stands to profit handsomely from his ownership stake in the investment firm SkyBridge Capital, which he founded. Per Politico:

The incoming White House communications director earned $4.9 million from his ownership stake in SkyBridge in addition to more than $5 million in salary between Jan. 1, 2016, and the end of June, when he joined the Export-Import Bank, according to a financial disclosure filed with the Office of Government Ethics. The disclosure form hasn’t been previously reported.

The disclosure highlights the extensive wealth Scaramucci has accumulated in his career — much like many of Trump’s other top advisers and Cabinet secretaries — and also the challenge he faces in extracting himself from the potential conflicts his investments could pose.

Scaramucci has vowed to purge the White House communications office (which is full of former Republican National Committee staffers loyal to Priebus) of leakers, and he’s already fired Assistant Press Secretary Michael Short. “If you’re going to keep leaking, I’m going to fire everybody,” Scaramucci said on Face the Nation.

Apparently if you keep leaking about Scaramucci, he may publicly suggest you committed a felony … though, as several people pointed out on Twitter, it’s a disclosure form, which means it will eventually be made public anyway.

It is not a felony. Not even a crime. It is a public form. That’s why it’s called a “disclosure.” https://t.co/ozzNRDifFa

I mean they call it a DISCLOSURE form, not a "cover it up" form. But, sure, go ahead. https://t.co/tKf1hQahlp

.@Publici has disclosures in sortable searchable database here. Which we could do because they are public. https://t.co/BQ8Rvds3AL

But the Justice Department was happy to play along:

JUST IN: DOJ releases statements on leaks after @Scaramucci says he will contact FBI over his leaked financial docs. pic.twitter.com/8BA2LEoWeS

Of course, the really juicy news here is that Scaramucci appears to be taking a cue from his boss’s public bullying of Attorney General Jeff Sessions. The Washington Post reports that, hours earlier, Scaramucci dined with Trump, Fox News host Sean Hannity, and Fox executive Bill Shine to discuss overhauling the White House staff. “The private dinner comes as Trump is contemplating major changes inside his White House, empowering Scaramucci to reimagine his communications strategy,” the Post notes.

Journalists on Twitter suggested Scaramucci’s tweet was the opening shot in an effort to finally get Priebus fired — and that Trump probably approves.

In case there's any ambiguity in his tweet I can confirm that Scaramucci wants the FBI to investigate Reince for leaking.

Some in White House are trying to build a case that Priebus is a leaker — “a diagram” charting leaks, per senior official — to show Trump.

It creates drama and excitement, a show to watch. And it sets the stage for Priebus to have to swing back hard, or have Trump see weakness.

It kinda seems like Trump has outsourced the firing of Reince to Mooch.

But several hours later, Scaramucci set the record straight (or thought better of siccing the Justice Department on a colleague for possible non-felony leaking). He claimed he wasn’t accusing Priebus of leaking in his original, now-deleted tweet. He was just letting the real leaker know that they’re going to have to answer to the Justice Department and the president’s embattled chief of staff.

Wrong! Tweet was public notice to leakers that all Sr Adm officials are helping to end illegal leaks. @Reince45 pic.twitter.com/AB0reseuX1